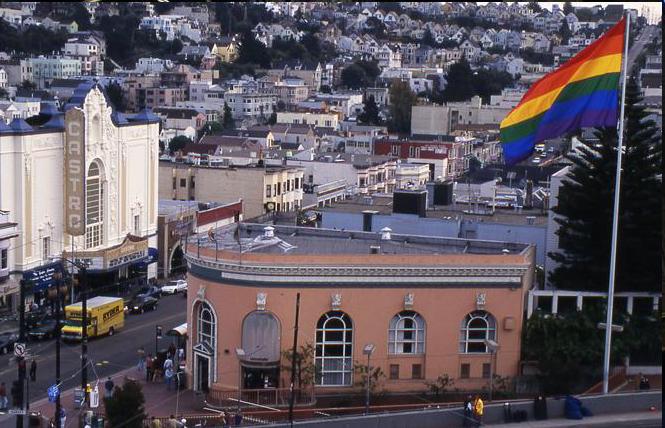 An announced town hall on the subject of raising a more contemporary Pride flag at Castro and Market streets was quietly dropped by the Castro LGBTQ Cultural District last month.

That vote came weeks after the town hall was supposed to have taken place — as it was initially announced for August or September.

"This was due to a lack of capacity to implement the town hall as an event as we are focusing on other projects right now," Aguirre, a genderqueer person, stated October 21. These projects include COVID-19 testing and vaccinations in the Castro, as the B.A.R. previously reported, and the collection of data about the sexual orientation and gender identity of business owners, managers and employees in the area. (See related story.)

As the B.A.R. reported July 14, the Castro LGBTQ Cultural District announced a community survey and a town hall on the subject of the flag — after the district's advisory board voted 7-2 that the Gilbert Baker-designed rainbow flag that currently flies atop Harvey Milk Plaza be replaced by the Progress flag.

Baker died in 2017. Charley Beal, the president of the New York-based Gilbert Baker Foundation, has been pushing behind the scenes with both gay District 8 Supervisor Rafael Mandelman and Mayor London Breed's offices for the flagpole to be landmarked, according to communications released as part of a disclosure request to gay activists Michael Petrelis and Bill Wilson. It will be eligible to be landmarked next year, and Mandelman is open to discussing the possibility.

The Progress Pride flag is a variation on the rainbow flag that includes a chevron with the colors of the transgender flag, as well as brown and black stripes. It was unveiled in June 2018 by nonbinary designer Daniel Quasar, who made it in order to more explicitly represent transgender people and LGBTQ people of color.

The cultural district is not, however, in charge of the flag installation. The Castro Merchants Association has long maintained the flag that has flown at Castro and Market streets since the flagpole there was dedicated on November 7, 1997 (though over the years there have been rare occasions when other flags have temporarily been hoisted). The business association ultimately adopted a policy that the Baker flag would fly full-staff, 24/7, year-round.

After the cultural district's board's vote, Castro Merchants President Masood Samereie, a straight ally, proposed a second flag pole be erected in the Castro to fly the Progress flag, or another flag. He added that the merchants "appreciate" the district's "efforts to further community discussion through a planned survey and town hall."

The survey went live July 26 and was intended to be followed by the town hall. Aguirre stated to the B.A.R. October 20 that "the importance of the data collected by the inclusiveness survey is still very important to us, and we are actively working to complete the survey by December 1 [at] the latest."

Aguirre stated to the B.A.R. that the survey can now hopefully be incorporated in the Cultural History, Housing and Economic Sustainability Strategies, or CHESS, Report that the district will have to present to the Board of Supervisors next year. The district is currently collecting the aforementioned SOGI data for the CHESS report.

"While the Castro representation and experiences survey does include questions about the flag, it has a much broader purview than a survey about the flag," Aguirre stated.

Aguirre also stated that the district will hold a town hall in January about the CHESS report.

When asked for a statement on the cancellation of the town hall, Castro Merchants community liaison Nik Blanchet stated that "We strive to maintain an excellent relationship with all of the Castro neighborhood [organizations], and we listen to and work with anyone whose goals are to support and nurture the broad diversity of people, ideas, and creativity that this iconic neighborhood has and should forever represent.

"We know no one person or organization is the sole steward of the Castro," Blanchet continued. "We are all temporary caretakers doing our best to see each other and to work together to build a neighborhood we can all feel welcome in and belong to."

As Hoodline reported in March, the merchants were one of four similar groups citywide that each received a $50,000 grant funded by tech entrepreneur Chris Larsen, who B.A.R. readers may remember also is funding community benefit districts throughout the city to install security cameras. One such proposal for the Castro was rejected in June. Samereie told Hoodline's Steven Bracco, a gay city firefighter who is also on the cultural district's board, that the merchants would be spending that money, at least partly, on the maintenance of the rainbow flag.