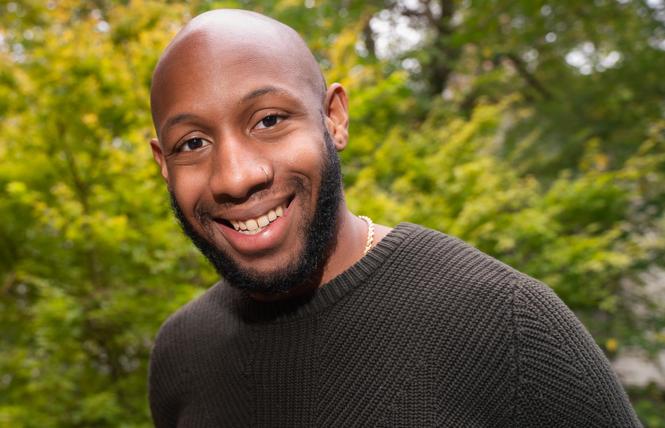 A gay affordable housing advocate has joined the San Francisco Rent Board as a tenant representative in one of the oversight body's alternate seats. The board oversees how much property owners can annually raise rents on rent-controlled units and resolves tenant complaints against their landlords.

Mayor London Breed named Kion Sawney, a project developer at the affordable housing builder Mercy Housing, to the seat in September, and he was sworn in October 20. He is serving as an alternate for Kent Qian, a tenant and deputy city attorney for the Oakland City Attorney's office.

The five-person rent board is composed of two tenant representatives, two landlords, and a neutral person all appointed by the mayor. Each person also has an alternate who can step in if they are unable to participate in a meeting and vote on matters brought before the board.

Alternate members are active in all other aspects of the rent board. Sawney has been meeting with the rent board staff this week and expects to take part in his first official meeting November 9.

"Me being a representative and giving voice for communities I represent and identities I embody, it is extremely important those voices are being heard. I will bring that perspective every time I am at a commission meeting," said Sawney, 31, who is Black, HIV-positive, and originally from Long Island, New York.

After moving to San Francisco five years ago, Sawney lived with various roommates in the Mission and on Upper Market Street. Over Labor Day weekend he moved into his own studio apartment he is renting in the Western Addition, able to take advantage of the drop in rental prices brought on by the COVID-19 pandemic.

In a phone interview with the Bay Area Reporter October 25, Sawney said he intends to take advantage of the advocacy role from serving on the rent board to push it "to look at issues that do address racial equity, and to take a stand and position on where things are and not give it lip service."

He replaces Reese Aaron Isbell in the alternate tenant representative seat on the rent board. After serving on the oversight body for two years, Reese resigned in late July after he and his husband bought a condo.

Breed initially appointed Isbell to serve as a tenant representative on the city's rent board in late March 2019. It was believed to mark the first time an out gay man had been named to the commission, as several gay men had earlier been appointed to the body but their being members of the LGBTQ community was not reported on at the time.

Breed's decision to replace longtime rent board commissioner Polly Marshall with Isbell, however, drew strong objections from Marshall and tenant advocates. Members of the Board of Supervisors also raised concerns about seating Isbell, with even gay District 8 Supervisor Rafael Mandelman telling the B.A.R. at the time he did not support Isbell serving on the rent board and would vote to unseat him.

With the supervisors expected to bounce Isbell from his rent board seat, Breed preempted them by making Isbell an alternate member of the oversight body. In his place she elevated Qian, who had served as Marshall's alternate for seven years.

After being approached by the mayor's office this summer to replace Isbell on the rent board, Sawney allowed he had some reservations about doing so based on the controversy over Isbell's initial appointment. He acknowledged he is a relative unknown at City Hall, plus his job at times can require him to take a confrontational stance if objections are raised about the affordable housing projects he is managing for Mercy.

In thinking over the appointment, Sawney asked himself, "What do you want the world to look like?" Realizing he could address various issues of importance to himself, both professionally and personally, via the rent board seat and after consulting with Isbell, Sawney concluded it was an opportunity he didn't want to pass up.

"I want to be respectful to the role and want to honor its position because you recognize its importance to the community," said Sawney, who reached out to members of the supervisors' rules committee who could have moved to block his appointment.

Sawney told the B.A.R. he isn't aware of any objections being raised about his taking on the role. Isbell said he is pleased with whom Breed chose to fill the position, especially since it is someone from the LGBTQ community.

"He seems wonderful, and I am really excited about his appointment," said Isbell, a senior account executive at Gravitate PR where he works on public relations for tech startups. "I want to thank the mayor for making such an appointment, especially from the community. Continuing to have a voice from the community is important, so I am pleased with that."

In 2014, Sawney graduated from Vanderbilt University with a B.A. in urban planning. He landed a job with a Nashville-area housing developer and then relocated to the Bay Area in 2016 after being hired by Beacon Development Group.

He joined Mercy Housing last summer and is currently working on two of its projects aimed at providing housing for families and people formerly homeless. One is a 221-unit development South of Market, while the other is a 73-unit project slated to be built near Zuckerberg San Francisco General Hospital and Trauma Center.

While not assigned to the new 100-plus units of LGBTQ-affirming senior housing that Mercy is developing on Upper Market Street, Sawney first learned about the affordable housing developer when he was walking his former partner's dog. He happened upon the groundbreaking ceremony for the LGBTQ-welcoming senior housing at 95 Laguna that Mercy built with partner Openhouse, the nonprofit provider of LGBTQ senior services.

The two organizations have partnered again on the senior housing slated for 1939 Market Street. It is practically around the corner from their Laguna senior housing campus.

"It seems a simple thing to walk across that groundbreaking, and to think years later I would work for Mercy. It is a great honor of mine," said Sawney, noting that at the core of the projects the developer is working on in San Francisco "is putting people in housing, and creating equity and opportunity."

Sawney came to a career in project management via his founding while an undergraduate in Tennessee the Kefi Project, an organization focused on interdisciplinary public art. He launched it as a way to come to terms with his being diagnosed as HIV-positive at the age of 21.

"I was extremely, extremely depressed and I was sad. I started the art project as a way to find value in myself and find value in the community around me," he recalled. "I ended up loving project managing and working with communities on projects. That part is now bigger as the projects are bigger and the budgets are bigger, but the core of it is the same."

As a member of the rent board, Sawney aims to represent the various communities he is a part of in San Francisco.

"I hope people see me as a resource. Being queer, being Black, I want to put myself out as a resource," he said. "I have a lot of identities and all those identities are important to me. I understand what it is to be an other in any community and the responsibility I have to the communities I am a part of."

Sawney has yet to be given a city email as a rent board member. For now, he can be contacted via his Instagram account at https://www.instagram.com/noik/

Web Extra: For more queer political news, be sure to check http://www.ebar.com Monday mornings for Political Notes, the notebook's online companion. This week's column reported on San Francisco's public health department being faulted for its lack of LGBTQ demographic data.