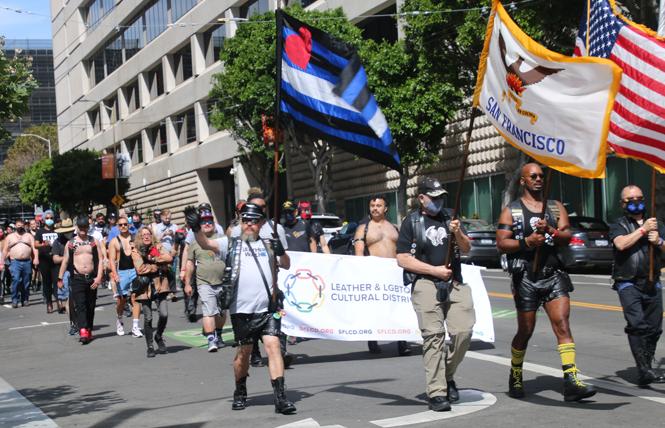 After the lack of an in-person event last year, South of Market is once again ringing out with the sounds of house beats, whips, and howls. Leather Week is here.

The week began with a revitalized LeatherWalk from City Hall to Eagle Plaza Sunday, September 19. Cal Callahan, a gay man who is the district manager of the Leather & LGBTQ Cultural District, told the B.A.R. that "we are very pleased at how LeatherWalk has been received."

"Turnout was greater than we expected and when I looked out at the crowd, I saw so much of our community represented," Callahan said. "We wanted an event where everyone felt they belonged, an event that everyone felt was theirs."

A ceremony was held at the public parklet to raise the new flag on its flagpole situated near its entrance on Harrison Street at 12th Street after the previous flag had become tattered by the wind.

"It was an exciting moment to watch the new, bright Leather Pride flag being raised," Callahan said. 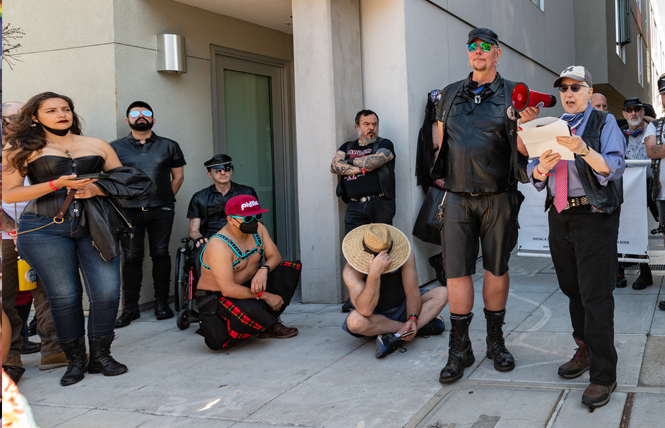 Anthropology Professor Gayle Rubin, Ph.D., rightt, who specializes in leather history, talked about the history of Ringold Alley during a stop on the LeatherWalk. Photo: Jane Philomen Cleland

Megahood2021 expecting up to 40,000
The premier event, of course, is Megahood2021 — this year's iteration of the Folsom Street Fair — which will be Sunday, September 26, from 11 a.m. to 6 p.m. on Folsom Street between Eighth and 12th streets, and on Ninth, 10th, and 11th streets between Howard and Harrison streets.

When asked how many people are going to attend, Angel Adeyoha, the queer and nonbinary executive director of Folsom Street Events, told the Bay Area Reporter that's the "million dollar question."

The typical Folsom Street Fair is attended by about 250,000 people.

Because the street fair's size will trigger the city's outdoor mask mandate (10,000), people will be required to wear a mask much of the time.

"We are checking vaccine cards at the gate and will make sure people have a mask," Adeyoha said. "Eating, drinking, or more than six feet away: people can take off their mask. Now in line for a bar or when dancing: those are places we're asking people to put their mask on. Bring your vax card, bring your mask: put it in bold at the top."

The fair has been rechristened for this year to honor its roots, as Megahood was the original name of the event when it was inaugurated in 1984. It also belies the pared-down nature of this year's event.

There will be more room for folks to walk around and, perhaps most significantly, there will be no alcohol sales except at bars and restaurants within the fair area.

"This year, we are suggesting people be as generous as they can be," Adeyoha said. "That's what'll help Folsom Street get back on good financial ground."

The organization took on $250,000 in operational debt in 2020, without an in-person fair to sustain its business model. A virtual fair, headlined by Margaret Cho, took place last year due to the pandemic.

"I hope folks recognize that the way we continue to have amazing arts and cultural events is by supporting them," Adeyoha said. "So, please show up and support."

Of course, this is also a big week for circuit parties — the biggest since the start of the COVID-19 pandemic — with seven scheduled between Friday night and Monday morning.

Cecil Russell, a gay man who is the head of Cecil Russell Presents and Gloss magazine, is producing or co-producing several, including Matinee Pervert XXL at The Midway Saturday, September 25, at 10 p.m. and Hot Tea at Audio the following day at 5 p.m.

Russell, like Adeyoha, said health orders would be followed. He told the B.A.R. all party attendees will have to show proof of vaccination and follow city guidelines for indoor venues.

"Pride was big for us but this is probably more people coming in than Pride," Russell said. "It's going to be great production, great DJs — probably some of the best DJs we've had in a couple years."