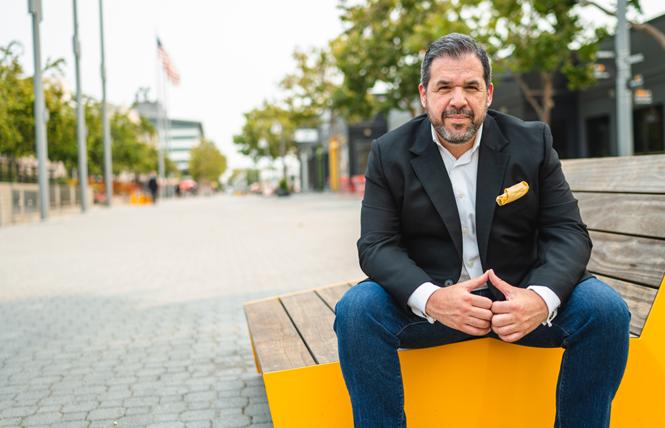 When people think of Oakland, Peter Gamez wants them to imagine lakeside gondola rides, mountain biking, and hiking amid Redwoods.

"And all within a 25-minute distance," touted Gamez, a gay man who is the new president and CEO of Visit Oakland, the East Bay city's destination marketing organization.

Gamez, 54, started leading the organization last month. For the past two years he'd been running his own shop at Hunter Hospitality Consultants, which worked with developers, owners, and hotel management companies. Before that he'd been on the board of directors for SF Travel, serving as board chair from 2018-2019.

SF Travel CEO Joe D'Alessandro, who is also gay, said that Gamez is still active on the board as the immediate past chair.

Gamez, a native to the Mission neighborhood, lives in central San Francisco with his husband, Ricardo Ramirez, and their dog Hunter. He goes to Visit Oakland's offices five days a week.

"People think I named my company for my hunter instinct," Gamez recounted. "But it's actually named for my 120-pound Bernese Mountain dog, who you'll see me walking around Buena Vista Park."

While the pair has no plans to relocate to Oakland, Gamez said he knows the Bay Area well and that often people's expectations of the Town — as Oakland is affectionately called — across the bay often don't match up with reality.

"So many people come to Oakland and think they know what it's like, but they are viewing Oakland from what they've heard in the past," Gamez explained. "There's so much to do in the East Bay, and in Oakland."

Now is the time for Oakland to show what it has to offer, Gamez said, both because of COVID-19 restrictions on international travel and the beginning of the Bay Area's summer season.

"As you know, [travel is] an industry impacted heavily economically, as people are not allowed as much to travel internationally, and so now is the time Oakland can showcase itself to its neighbors," Gamez said. "This is the drive market. Leisure vacations — especially with an outdoor element — are prime right now."

To that end, Oakland has lots to offer, Gamez said, such as kayaking on the Oakland Estuary between the cities of Oakland and Alameda.

"There are three areas I'm a big fan of. Number one, not many people realize we have this lake in the middle of our city called Lake Merritt," he said. "Even across the bay people don't realize Lake Merritt offers bicycling, kayaking, and gondolas."

Gamez is also a "big fan" of Joaquin Miller Park on the city's east side.

"It's Redwoods, and you're actually hiking in the Redwoods," Gamez said.

The third place Gamez wanted to highlight is the 80-acre Oakland Zoo, which he described as "a zoo that celebrates conservation work with the animals of California." At the zoo there is "an aerial tram featuring some of the most amazing views of the whole Bay Area," he added.

And, what's more, temperatures in Oakland are "five to 10 degrees warmer than our neighbors across the bay, so it's a warmer experience in September-October."

One of the things Gamez likes to do himself when he visits Oakland is go to free concerts by the Oakland Symphony in the Brooklyn Basin neighborhood. The series concluded last week. (Michael Morgan, a gay man who was the symphony's longtime artistic director and conductor, recently passed away.)

"I'd just grab a bottle of wine and a picnic for a cool experience," Gamez said.

Gamez said that his leadership of Visit Oakland is a testament to the diversity of the whole community.

"As I told some of my colleagues, being an LGBTQ and Latinx leader, it's not surprising. It's accepted here in Oakland, because Oakland has been at the forefront of equality and equity for four decades," Gamez said. "I feel right at home and welcome.

Oakland's LGBTQ community, which celebrated its annual Pride event last weekend, is integrated in every aspect of the tourist bureau's marketing.

"It's not just on a certain weekend or month," Gamez said. "This is one of our pillars for Visit Oakland."

In his first hundred days, Gamez will be "diving into the organization's financial, legal and governance standings to help determine how best to recover and rebuild after the traumatic impact of the pandemic," according to the news release announcing his hiring.

In that same release, Gamez received a welcome from Oakland Mayor Libby Schaaf.

"Oakland welcomes all visitors to our beautiful and inclusive city with open arms," Schaaf stated. "We know that tourism fosters incredible economic opportunity citywide, and particularly for our small, locally-owned businesses. I want to congratulate Peter Gamez as the new CEO of Visit Oakland, whose commitment to Oakland and business acumen will elevate Visit Oakland and help boost our local tourism economy."

She was joined by Barbara Leslie, the president and CEO of the Oakland Chamber of Commerce.

"We are excited to welcome Peter to our Oakland family," Leslie stated, "and look forward to his leadership in amplifying Visit Oakland's initiative, 'Think Oakland First.' A strong tourism industry is essential to Oakland's economic sustainability — one that embraces all of our small, local, women owned and BIPOC businesses who are responsible for creating the beautiful tapestry we call home."

A main driver of visitation to Oakland has been its professional sports teams. But in recent years both the Raiders football team and Golden State Warriors basketball team decamped for other cities, Las Vegas and San Francisco, respectively. Now the city could potentially lose the Athletics baseball team as negotiations drag on over its preferred site for a new stadium at the Port of Oakland.

Asked for his thoughts on the Oakland Athletics' Howard terminal ballpark proposal, Gamez said, "I really am not able to give any comment on that because I haven't gotten to the point of viewing the proposal, but numbers do show sports help with leisure travel and economic development, not only lodging, but restaurants as well."

The team and the city remain at odds over the ballpark plan, which suffered a further setback in August when the Alameda County Board of Supervisors said that it would not vote this month on whether to opt into a tax district to help cover infrastructure costs, as the San Francisco Chronicle reported.

Visit Oakland, a private nonprofit, is funded by 1.5% of the funds collected from the Measure C hotel occupancy tax, and from the Oakland Tourism Business Improvement District, which receives $1.50 for each hotel rental. It has five full-time staff members and 21 directors on its board. The organization's most recently available IRS Form 990 is from Fiscal Year 2016-2017, and it shows then-CEO Mark Everton received $147,029 in total compensation. Its budget is about $3.9 million.