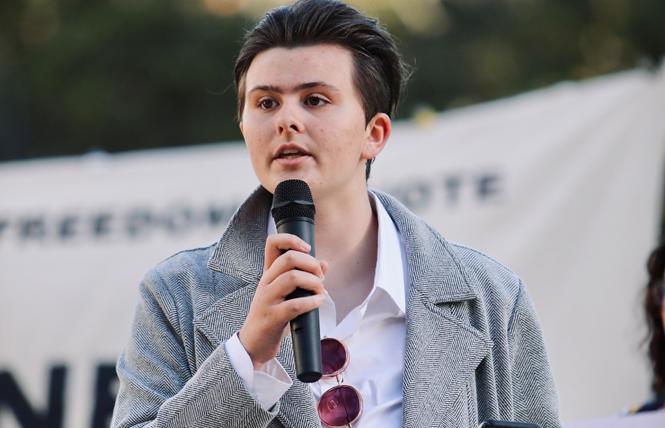 Homophobes don't belong in the Democratic Party. To be clear, homophobes don't belong anywhere, in any party, but they especially, especially don't belong in the Democratic Party, in 2021, in heavily Democratic Alameda County, arguably one of the bluest counties anywhere in the state. Here in Alameda County, the difference between the number of registered Democrats and Republicans (in political speak we call that the D-R spread) is D+48.58 points, second only to our neighbors across the Bay in San Francisco County. If you look at just the raw percentage of registered Democrats, we've got the third highest percentage at 59.59%, beaten out only by San Francisco and Marin counties. All that to say, I live in an area where the Democratic Party and the equality it says it stands for isn't controversial.

It seems our pro-queer amendment is somehow even less controversial with the ACDCC than the Democratic Party is controversial in deep blue Alameda County. The amendment passed unanimously, 30 votes in favor, 0 against, 0 abstentions! Bisexual Assemblyman Alex Lee (D-San Jose), who represents the 25th Assembly District (hey, my Assembly member!) sponsored it. In total, 25 members, including at least one from every single Assembly district in the county, sponsored the amendment.

It's not just political for me, it's personal too. I've been called a faggot and dyke more times than I care to remember (sometimes both in the same sentence), I've been told I'm going to hell, that all the queers should die, that I should "tone down the gay," and by one particularly kind individual that they wished "lesbians got all the AIDS too." It made me feel like I was gross and dirty and deserved whatever I got. It made me at times hate myself. Sometimes it even made me wish I was dead because I didn't think things would ever get any better. So I owe it, quite frankly, to the queer people that come after me to make things better, and we don't make things better by supporting homophobic politicians who want to make things worse.

When elected officials, tasked with representing communities, which definitely include LGBTQ people, discriminate against the queer community, it encourages hate. External hate as discrimination, and the self-loathing, fear, and dread of internal hate. Unfortunately, I'm not just talking hypothetically either — my own mayor, Lily Mei of Fremont, voted to exclude queer literature from an AP English curriculum and voted against recognizing Harvey Milk Day during her time on our school board. In 2018 she endorsed Yang Shao, someone who's quoted in the New York Times speaking against same-sex marriage. My own mayor endorsed a guy who said I should never be allowed to marry anyone I love. Ever. Of course, that stings.

She says she's changed now, and that she "unequivocal[ly] commit[s] to advancing the rights, well-being, and dignity of LGBTQIA+ people and their families," though notably she says this on a webpage where she's included a picture of herself with now-Alameda County Supervisor David Haubert, a man who voted against raising a Pride flag as mayor of Dublin in 2019. But of course Mei says she's changed: she likely wants the Democratic Party endorsement for her state Senate run in 2022. It hurts to know that current ACDCC members have endorsed her too, but I'm glad we now have this amendment as a tool to address the situation.

This is distinctly personal but it's political too, because the personal is political, especially when your identity has become politicized and your community has become marginalized. I understand that the Democratic Party doesn't endorse candidates because of their homophobia, but when it endorses candidates in spite of their homophobia, it sends a message that queer people are expendable in pursuit of some other political goal. So politically, our amendment means that for Democratically-endorsed candidates in Alameda County, advancing queer rights is no longer an optional position. Because endorsing homophobes tells everyone, queer or not, that the Democratic Party — the party of equality — doesn't really care about homophobia. That hurts, politically and personally.

There's no excuse, especially for the Democratic Party, to support homophobes. From now on, if a candidate wants to be endorsed by the ACDCC, they don't get to be homophobic. It shouldn't be a high bar though, because not being homophobic is really pretty easy.

Annie Koruga is a Bay Area-based social justice organizer who has been involved in a diverse array of campaigns from organizing for safe parking for vehicle residents to organizing statewide within the California Young Democrats to organizing a Black Lives Matter march. They believe that all fights for justice are inherently related, and that the path to justice involves community based organizing and advocacy. Koruga is a non-voting member of the Alameda County Democratic Central Committee who represents the Southern Alameda County Progressive Democrats.