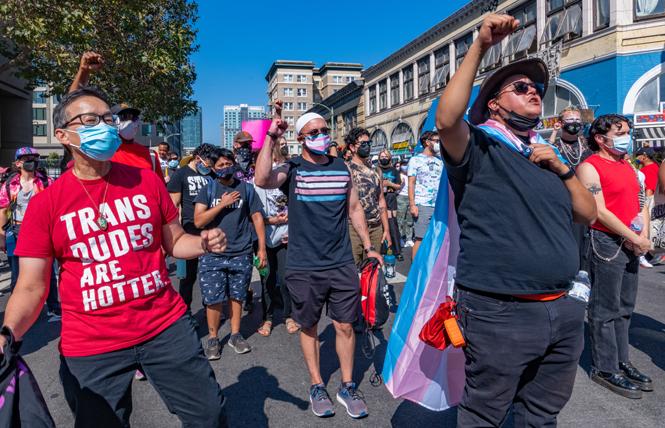 Turns out there'll be Pride celebrations in Oakland this year, after all.

In the wake of the Oakland Pride organization's August 31 announcement that there will be no in-person parade or festival this weekend amid internal leadership and financial crises, there will be two outdoor festivals, a circuit party, and family fun at Children's Fairyland put on by other groups.

Pridefest will close two blocks of Broadway from Thomas Berkeley Way to 22nd Street Sunday, September 12, from 10 a.m. to 6 p.m., according to Olaywa K. Austin, the founder and CEO of Oakland Black Pride. A third block will be closed along 21st Street to Telegraph Avenue.

"The day will start with vendors — actually, we'll have some yoga to start the day: a little fitness to kick the day off — and then we'll have talent on a stage," Austin said. "We have secured Grammy Award-winning artist Mýa to perform as our headliner and there will be other local queer DJs, drag shows and live entertainment."

Sean Sullivan, a gay man who co-owns the Port Bar with his partner, Richard Fuentes, told the B.A.R. last week that he and Austin had to wait until the Oakland Pride organization announced the cancellation of its in-person events before they could get the necessary permissions from the city for the street closure required for Pridefest.

Sullivan is also putting on Love: The Circuit Party September 12 from 4 p.m. to midnight at the event space 1544 Broadway, about two blocks from Pridefest and the Port Bar. Attendees will be required to show proof of vaccination in order to be admitted.

Tickets are between $50 and $55 and can be purchased on Eventbrite. The party, Sullivan said, is a milestone in itself.

"There are many parties in and around Oakland Pride, but never a circuit-style event in the 10 years I've lived here," Sullivan said. "So it's an exciting first."

On the club scene note, Valentino Carrillo, owner of Que Rico Nightclub and Restaurant in downtown Oakland, said that his business is going to "be celebrating Pride all weekend long," with Pride-themed events on Friday and Saturday nights. This includes a Latin Pride kickoff celebration at 7 p.m. September 10 hosted by drag performers Violeta and Frida Mont. Que Rico will be open all day Sunday, September 12, he added.

"We've been pretty busy the last couple weeks," Carrillo told the B.A.R. "People still want to celebrate Pride so we're going to have a busy weekend."

Austin said that there will be a pop-up vaccination site provided by the Native American Health Center.

"We'll also have a VIP section in front of the stage — vaccinated important person," Austin said. "That's going to be for vaxed folks only. The tea is we want to make vaccination attractive."

Austin said that LGBTQs who are Black, Indigenous, and other people of color (BIPOC) have lower vaccination uptake rates. "We want to make sure we're covered by providing the opportunity for them," Austin said.

The VIP section will be cordoned off from the rest of the fair with a picket fence so that people who want a greater level of safety from potential COVID-19 exposure don't have to venture into the rest of Pridefest.

"The VIP section will have its own private bar, provided by SweetWater Brewing Company, and catering by Roux40, a restaurant about to open in the fall in Oakland's Temescal," Austin said.

Masks will be required outdoors during dancing, Austin said, though not in the VIP section.

"There were some challenges because we're a very close community and there was a lot of confusion on who's doing what," Austin said. "It's been trying, but it's started necessary conversations. We should not be looking at one organization to provide us with a Pride celebration. ... We're excited to be able to present this.'"

Sullivan said that the last week has been both "intense" and "exciting."

"It's intense because we were planning this event outside of Port Bar but now we have taken a broader role," Sullivan said. "And people got Oakland Pride confused with our event. But it's very exciting at the same time, because a lot of people are coming together to help."

Center hosting Pride in the Park
The Oakland LGBTQ Community Center is planning on hosting its fourth Pride in the Park Saturday, September 11, from noon to 7 p.m. at the bandstand and gazebo by Lake Merritt. CeCe Peniston will headline the event.

"The purpose of this free event is to get the word out about health and wellness resources in our community, and provide COVID-19 vaccinations and HIV testing in the safest way possible during this pandemic," Joe Hawkins, a gay man who is the executive director of the center, stated in a news release.

The event will "feature vendors, health and fitness demonstrations, live entertainment, and guest speakers," the release states. People are invited to bring a blanket and food to the event, which will feature DJs Olga T, Brandon Barlow, Sidney Perry, and Benjamin Castro paying tribute to Black and queer trans music.

"So many people in this country have no clue that the roots of house music and other styles of dance and electronic music, was born in the Black queer and transgender nightclubs in Chicago, New York, and Detroit, and grew to become a global phenomenon," Hawkins stated. "It is important that we acknowledge, reclaim and pay tribute to the underground sound that queer Black and Brown deejays created that has become the soundtrack to the LGBTQ club experience everywhere."

The center is also partnering with Children's Fairyland to present Pride Family Fun Day at the location, near Pride in the Park, from 1 p.m. to 4 p.m. Saturday. Regular admission is $13 per person and children under 1 are free. The event is for youth up to age 7.

Oakland Pride reportedly planning virtual event
For its part, the Oakland Pride organization announced last week, along with the cancellation of its in-person events, that it will be producing a virtual event.

"Our 2021 Oakland Pride celebration will now be offered virtually," Oakland Pride posted on Facebook September 1. "Please join us on our website oaklandpride.org on September 12 for the fun."

Oakland Pride's website had no additional information about this virtual event. Last year, the group presented 32 total hours of virtual programming, as the B.A.R. reported.

Oakland Pride Co-Chair Carlos Uribe told the B.A.R. September 7 that "honestly I don't have the details because of my reduced capacity this year," but that he'd facilitate an interview with Treasurer Frank Ciglar. Neither Uribe nor Ciglar has followed up.