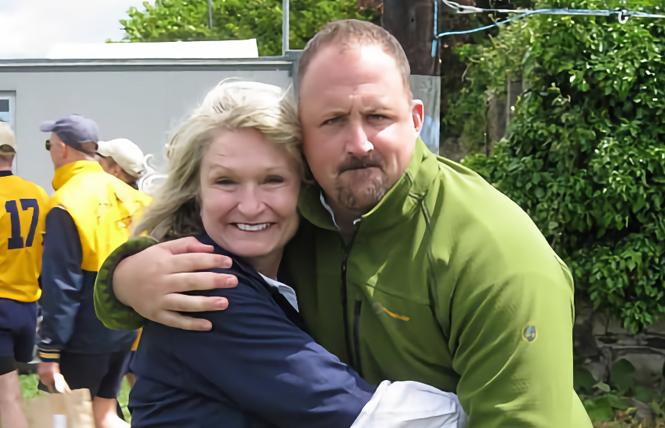 As the 20th anniversary of 9/11 approaches this week, I find myself reliving so many memories and moments from that tragic day and the sobering days and weeks that followed. Which got me once more to think about the invaluable role sports can play for so many of us, most especially those of us in the queer community.

My spouse, Eduardo, and I had a group of young mostly gay friends known as the Idora Park Irregulars who would meet at our house about once a week or so to watch a movie or TV show, enjoy whatever refreshments I was serving up, and engage in lively conversation. The evening of 9/11, they and a few others instinctively showed up, not to be entertained and not for lively conversation, but to seek shelter from the news footage we had watched nonstop all day; and to share our stunned and saddened thoughts about what had just happened and what would happen next.

That was Tuesday. The next day we went to a promotion ceremony for a friend who had just been promoted in the Oakland Police Department. We stood in the dark of her yard, lit candles, and spoke solemnly.

The rest of the week passed in a haze. At some point we were finally able to reconnect with all of our friends and relatives in New York, including a firefighter I had known from his birth and who the day after 9/11 was climbing over and digging through the rubble in a valiant but vain effort to try to help his boss find his son.

Earlier in 2001, I had been diagnosed with avascular necrosis in my hip bones, which meant that the circulation to my hips had been cut off and the bone had died. I was scheduled to have one removed in October and the other in December.

I was on crutches the week of 9/11. As a veteran journalist, I had been to many scenes of tragedy or disaster — floods, sniper shootings, and earthquakes — through the years and had always had an active role reporting on the events, helping victims of the event, or both.

My comparative sense of helplessness became overwhelming that week. I realized that if I were in New York City at the time, not only would I not be able to help rescue victims, I would not even be able to save my own life by outrunning the billowing deadly clouds the collapse of the burning towers created.

That Saturday, the weather in the Bay Area was engulfed with a chilly gray drizzle. I'd had enough. I packed up my husband and my dog into the car and we drove to San Francisco to watch the San Francisco Fog rugby team practice.

Until a month before, I had never even heard of the Fog. We had run into a player from the team named Derrick Mickle at East Bay Pride in August and had had a short but wonderful chat with him about the Fog and its sports inclusive mission. Mickle said he had just been asked to change positions to fullback, and when I mentioned that was what I played in college, he peppered me with questions about how to approach the position.

Then during the week following 9/11, we began learning through news reports about Mark Bingham, an early Fog player who inspired Mickle to start the club in 2001 and who had been instrumental in the successful but fatal battle by passengers on United Flight 93 to prevent terrorists from flying it into a target in the nation's capital, crashing it into a rural field in Pennsylvania instead. The mainstream news media had been shamefully slow to provide the same kind of personal profile information about Bingham's life that they had immediately publicized about his fellow passengers, but with the passing days they gradually filled in the blanks and it became known he was a gay man.

So that Saturday, I wanted to be on the field with other athletes, be there to show my support as they grieved the loss of their friend.

The gray drizzle seems appropriate for the emotions of the day. Rugby and rugby players are by nature loud and boisterous. This day the tones were hushed. Mickel and I hugged. I introduced him to Eddie and Bessus, the dog. He introduced me to the players. There was not a lot to say, but it felt so right just to be there at that moment.

"It was just so sad," former Fog player Bryce Eberhart said of that time. "It was very sad because you just lost a friend. And then you have this political layer on top of that. And then the violence, because it was a murder. It all added to the complexity of grief — but it was good to have that support system in place, to be able to lean on each other."

Eberhart, 48, and I had similar introductions to rugby during our college years. I came back to my dorm room one evening and found 10 rather burly rugby players sitting in the hallway near my door getting very drunk. One decided to tackle me and I quickly pinned him. The others all laughed and another one tried tackling me. Pinned him, too. By the time I got to my room I had pinned all of them.

They hadn't realized I was a wrestler.

The next morning, there was a knock on our door and rugby players piled into our room. My roommate was a wrestler and lacrosse player. They roused us from our beds, threw our clothes at us and hustled us out of the room and down to their cars. As we drove from central Ohio down to Cincinnati, they gave us rugby shirts, showed us a ball, and explained the rules to us, and next thing we knew we were playing rugby.

Eberhart was a football player in high school but decided not to continue playing after he was enrolled at Macalester College. He, too, got a knock on the door.

"They said, 'Aren't you that gay guy that quit the football team?'" Eberhart said. "'We're a man short. Let's go.' It wasn't a kidnapping, but it was coerced."

Some are born to rugby; others of us have rugby thrust upon us.

"The Fog was great for me, especially since I had just moved to San Francisco because it was a built-in group of friends," he said. "It gives you a family, and that family extends beyond that club. It gives you an international family."

The international family in gay rugby took off after 9/11. To honor Bingham, international gay rugby founded a biennial championship named the Bingham Cup. I, along with many players from across the globe, got to know Bingham's mother, Alice Hoagland, when she appeared at the first Bingham Cup in San Francisco in 2002.

Hoagland made it back to every Bingham Cup that followed and, through the years, I always enjoyed talking with her and getting to know her. She died last December.

I mentioned to Eberhart that I never knew Bingham but still mourned his death and admired his legacy.

"That's one of those things that happen over time," he said. "What he did was heroic. He has become a kind of icon for our community. We all own him now, not just those of us who knew him."

Eberhart met Aaron Fleming at the 2004 Bingham Cup in London. They were married last year and now live in Sydney.

I never made it back onto the rugby pitch, but I resolved that day to return to sports competition despite the hip replacements. I started by volunteering at Fog fundraising beer booths during street fairs. Eventually I returned to wrestling, a sport which never demanded I run anywhere, and formed an entirely new family of athletes.

I think the families we develop through sports participation are of particular importance for those of us in the queer community. Many are not accepted by their biological families; many others who are accepted always sense that acceptance comes with an asterisk. Sports allow us to escape the asterisks and find each other.

Eberhart no longer plays rugby, but he'll always be a rugby player.

"I've got a bad shoulder and a bad knee because of rugby," he said. "I wouldn't trade the years of rugby in for anything. It was the most fun I ever had in my life. I wish I could do it again."

A documentary on Mark Bingham, "The Rugby Player," formerly called "With You," is now streaming online at https://vimeo.com/

For more information about the San Francisco Fog, visit the website.

Updated, 9/9/21: This column has been updated to clarify that while Mark Bingham was not an SF Fog founder, he was an early member and player.

Jock Talk: Behind the decision to postpone Gay Games XI
Sign up!