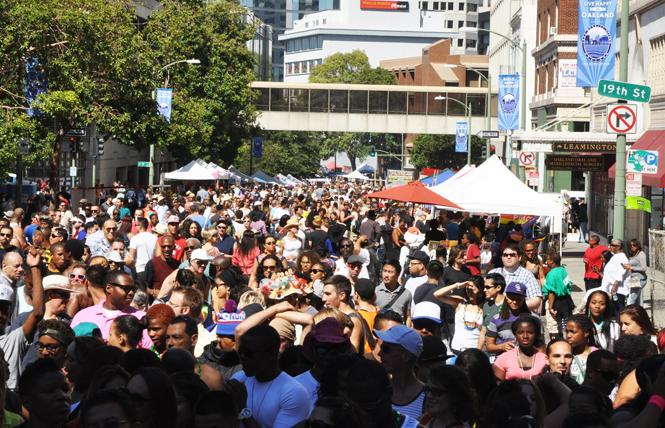 The Oakland Pride organization had been having financial and leadership difficulties in the months before it decided to cancel this year's in-person parade and festival, according to emails sent to the Bay Area Reporter late August 31.

However, amid Oakland Pride's implosion, some East Bay LGBTQ community members are stepping up to the plate to put on an event September 12.

Sean Sullivan, a gay man who co-owns the Port Bar, told the B.A.R. that Oakland Black Pride and Port Bar are collaborating on a PrideFest, scheduled for that Sunday from 10 a.m. to 8 p.m. in front of the bar on Broadway.

"For people who attended the Compton's Cafeteria [Riot Party] celebration, it will be akin to that, instead of a large parade with multiple blocks," Sullivan said. "We were looking for leadership from Oakland Pride and found none."

The announcement of PrideFest had to wait until Oakland Pride announced its intention to cancel, Sullivan said.

Olaywa K. Austin, the founder and CEO of Oakland Black Pride, confirmed that PrideFest will "take over the two blocks of Broadway from Thomas Berkley Way to 22nd [Street]" and there will be on-site COVID vaccinations. Austin and Sullivan said more will be announced soon.

Oakland Pride co-chair Carlos Uribe told the B.A.R. that a health crisis on his end hurt the organization and treasurer Frank Ciglar "was left holding the bag." He did not dispute the veracity of the emails sent to the B.A.R.

Oakland Pride announced — with two weeks left before its scheduled events on September 12 — that it was canceling in-person events due to COVID-19, as the B.A.R. first reported online.

Behind the scenes, however, Oakland Pride had asked the Oakland LGBTQ Community Center to host this year's events, according to a July 20 email sent from Ciglar to Jeffrey Myers and Joe Hawkins, the co-founders of the center; and to Jacob Dornan and Scott M. Shuemake of IDK Events, which helps to produce the event.

"Does the center want to take Pride over ASAP?" Ciglar asked.

"Pride is only running with me so far this year and I need help," Ciglar's email states. "I was looking to close Pride and reached out to you [Myers] and Joe. Just never got the chance to email you with a follow up. Does the center want to take Oakland Pride on? Would they like to take it on right now or after I try to put it on this year. It doesn't matter to me either way.

"Now Pride is -[$]125,000.00 and trying to pay that off before we close this year out," Ciglar's email continues. "I have been loaning Pride [$]5k of my personal money each [month] just so it can make its credit card payments till funds start coming in."

According to the email chain, Myers had initially reached out to Oakland Pride earlier that day asking if the center could host the Sober Stage in honor of its creator, Robert Brown, who had died. Hawkins, who is currently the executive director of the center, responded to Ciglar the following day, July 21.

"As a co-founder of Oakland Pride, I am interested in the center taking over Pride considering the situation that it is in," Hawkins wrote. "However, from a nonprofit management and legal perspective, it is not a simple or quick process. Per nonprofit law, we would not be able to legally take over Oakland Pride ASAP!

Hawkins offered the center to host the main stage of the event, however, later in the message.

Ciglar followed up asking for fundraising support. Hawkins responded that it was already too late.

"I wish that we could provide fundraising support, but we can't," Hawkins wrote. "As the treasurer of Oakland Pride since the very beginning, you know that fundraising for an annual event like Pride is a yearlong effort. Oakland Pride is just a little over one month away. Asking our organization to assist with fundraising at the last hour is unrealistic."

Ciglar responded that his request was misunderstood.

"I don't think you understood my email," Ciglar wrote. "I have [companies] calling and emailing wanting to give money to Oakland Pride. I don't have the time to get back to them. I'm looking for somebody that can just reply to emails and talk to people about Oakland Pride. I was under the impression when you said you had a lot of volunteers that you might have some people like that who could call back or email back [to] these companies. At this moment it's no longer a dire financial situation."

That is the end of the email chain that the B.A.R. received.

Uribe told the B.A.R. that he was diagnosed with lymphoma, and subsequently with COVID, in spite of being vaccinated. 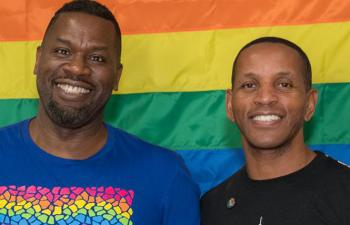 "Frank [Ciglar] has been doing everything he can," Uribe said. "The decision [to cancel] was due to COVID. I'll be honest — I was the person who early on insisted we have an in-person event because people really want that, but as the Delta variant has persisted, I think the right decision was made to not have in-person events. ... I look forward to beating this and bringing back Pride bigger and better next year."

Uribe went on to say that it was a "combination of things" that led to the cancelation, that due to the pandemic many volunteers have moved away or are busy with other activities.

Myers, Ciglar, Dornan, Shuemake, and Oakland Pride co-chair Amber Todd did not respond to requests for comment by press time.

Hawkins declined to comment further than a statement he sent to the B.A.R. with the email chain. The subject line was "Covid-19 Is Not The Whole Story."

"Our community here in Oakland deserves to know the truth about what really is going on with Oakland Pride," Hawkins wrote.

Hawkins went on to state that the center had started planning the main stage in early August, and only found out that Oakland Pride was going to be canceled August 31 after hearing rumors last weekend.

"We would not have known that Oakland Pride was being canceled had we not heard the rumors," he stated.

The most recent IRS Form 990 available from the Internal Revenue Service for Oakland Pride, Inc. covers the period from January 1 to December 31, 2018. It shows the organization that year brought in revenue of $19,813, and had total expenses of $24,318, a difference of $4,505.

The last in-person Oakland Pride parade and festival was held in 2019. It was canceled in 2020 due to the COVID pandemic and replaced with 32 hours of virtual programming.

In its announcement canceling this year's in-person event, Oakland Pride promised there will be a virtual event this year, though no further details have been announced.

This year's cancelation came just hours after the East Bay Stonewall Democratic Club announced it was postponing its annual Pride breakfast fundraiser to 2022.

The Oakland Trans March is scheduled at Frank H. Ogawa Plaza for September 4 at 2 p.m. Organizers have not responded to a request for comment.

Oakland At-large City Councilwoman Rebecca Kaplan, a lesbian who was a leader in the effort to revive Oakland Pride and kickstart a local LGBTQ center, is now vice mayor of Oakland. Her office did not respond to a request for comment September 1.