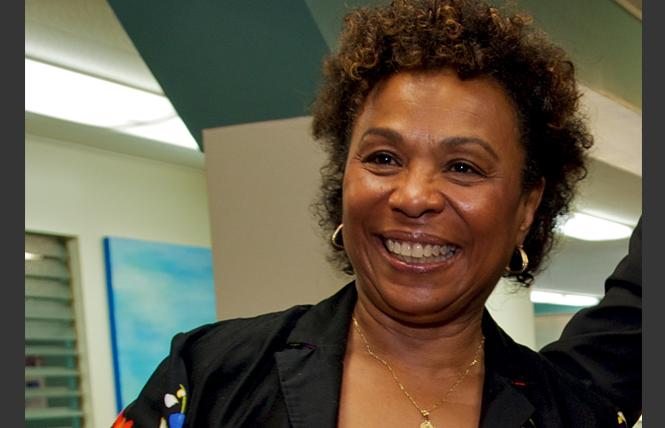 Congresswoman Barbara Lee was the only member to vote against going to war in Afghanistan nearly 20 years ago. Photo: Jane Philomen Cleland

Nearly 20 years ago, Oakland Congresswoman Barbara Lee (D) stood alone among her colleagues and voted against going to war in Afghanistan — she was the only member of the House and Senate to do so. Now with the chaotic scene unfolding following the Taliban takeover, and as the U.S. attempts to evacuate its citizens and Afghans who've helped us, it's apparent that Lee was right. We should have never gone to war so quickly there in the first place.

The reaction to Lee's vote in 2001 was furious, reflecting the strong emotions of the day, as the Washington Post reported this week in a column looking back at the era. The Wall Street Journal called her a "clueless liberal" and asked if she was anti-American. The Washington Times called her "a long-practicing supporter of America's enemies." The phones in her office were turned off after they were flooded with calls, the Post wrote, and she received so many death threats that for a time she had a police detail protecting her.

The Post noted that Lee also received thousands of letters, both in support and opposition, that are now housed at Mills College in Oakland. In 2014, the Atlantic's Conor Friedersdorf went through two of the 12 boxes of letters and found comments like these:

"You should have been in the Trade Towers you anti-American [expletive]. Drop dead!!!"

"Did you hope to go down as the sole pacifist in a sea of war-mongers? If so, you missed the mark. You will go down in history as the sole coward in a sea of courageous legislators."

Young people today are unaware of the overwhelming criticism Lee received for her courageous vote. But in her district she was widely praised. It also sparked the "Barbara Lee Speaks for Me" tagline — very popular in her East Bay district — that has helped her win reelection easily ever since, and has bolstered her standing among those calling for peace. She stood up to vote against rushing into war when others wouldn't and it will be remembered as perhaps the most notable vote of her career.

We recalled Lee's lonely vote this week as we witnessed the horrifying scenes from Kabul, where thousands of people tried to get to the airport and on a plane — their only way out of the country that is now controlled by the Taliban. Afghans who had worked with the government or foreign institutions and had embraced secular Western values are particularly shocked, disappointed and panicked. President Joe Biden said on Monday that he stands behind his decision to withdraw American troops. "After 20 years, I've learned the hard way that there was never a good time to withdraw U.S. forces," he said in his address to the American people.

As for Lee, she issued a statement August 16 on the ongoing crisis, calling for the safe evacuation of Americans and allies, including Afghan allies. "That must be our top priority," she stated. "This is an untenable and dire situation, and we have a moral obligation to protect Afghans seeking refuge."

Lee said that the American government should expedite special immigrant visas and support all in Afghanistan: "U.S. citizens, women, journalists, civil servants and activists, and allies of U.S. troops who need safe passage. This includes working with surrounding countries to encourage the welcoming of Afghan refugees across their borders."

Lee also agreed with Biden's statement that it's been clear for 20 years in the country that there was never a U.S. military solution [to its political instability and rampant corruption].

We strongly support Lee's call for safe travel for people in Afghanistan — and the U.S. reaction right now seems muddled as it's obvious that while officials may have prepared for various contingencies, none claim to have seen the Taliban returning to power in so short a period. Nevertheless, evacuating our friends didn't have to end in chaos. While we're currently in control of Kabul's airport, we must negotiate the safe passage of our citizens and Afghan allies to leave the country from various points. In addition to those who worked with American institutions and agencies, the U.S. State Department also needs to find safe passage for LGBTQs and women, two of the many groups who will likely not be treated well by the Taliban, despite their leaders' reassuring messages and offers of amnesty this week. Our neighbor to the north is already on it. Canada (https://www.nytimes.com/2021/08/14/world/asia/canada-refugees-afghanistan.html) has promised refuge for 20,000 Afghans, including LGBTQs, women, and human rights workers. These are the people who have the talent and commitment to building a civil society, and any country would be fortunate to welcome them.

Lee, who is chair of the Appropriations Subcommittee on State and Foreign Operations, stated that she's committed to humanitarian relief and the safe resettlement of the Afghan people, especially women. "We must also remain intensely focused on investing in the safety and security of Afghan women and girls," she stated. "An entire generation of Afghan women and girls have now seen the potential for a life of freedom and opportunity. The international community must continue to prioritize their rights and protection."

American troops who served or are serving in Afghanistan did what their country asked of them and they deserve our support. It's tragic that so many lives were lost and so many troops sustained injuries in what's become America's longest war, and for what? Afghanistan's government was always shaky due to graft and competing interests; its military was easily challenged and tentatively fought the Taliban, and in the end many abandoned their weapons, deserted, and stripped off their uniforms despite the billions of dollars in training and equipment provided by the U.S. Biden's decision was right. "I cannot and will not ask our troops to fight on endlessly in another country's civil war, taking casualties, suffering life-shattering injuries, leaving families broken by grief and loss," he said. "This is not in our national security interest. It is not what our troops who have sacrificed so much over the past two decades deserve. I made a commitment to the American people when I ran for president that I would bring America's military involvement in Afghanistan to an end. While it's been hard and messy, and yes, far from perfect, I've honored that commitment."

Now Biden needs to honor a commitment to resettle all of our Afghans allies who we encouraged to envision and build a secular, multicultural nation, and ended up risking themselves in the process. It's the right thing to do after 20 years of war.