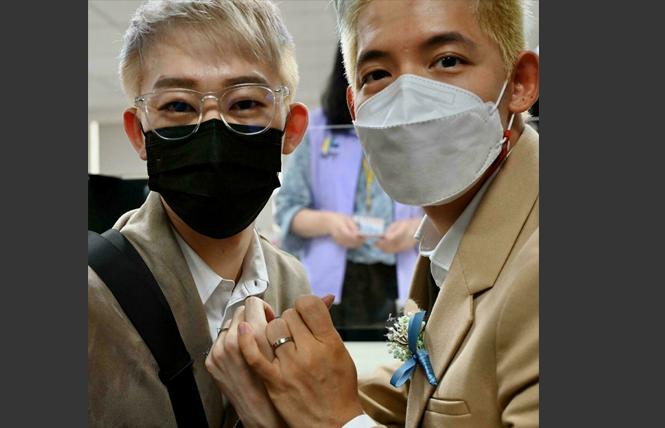 Taiwanese-Macanese binational marriage equality activists Ting Tse-yen and Leong Chin-fai wed in Taipei, the capital of Taiwan, in a first for the island nation August 13. Photo: Courtesy of Agence France-Presse

Ting Tse-yen, 29, and Leong Chin-fai, 33, fought long and hard to say "I do." In May, the Taiwanese-Macanese couple won a landmark legal case that paved the way for them — but only them — to get married.

The Taipei High Administrative Court overturned the government office's 2019 rejection of the couple's marriage registration. The court ordered the office to record a Taiwanese same-sex marriage with a foreigner from a place where marriage equality is not recognized. Ting Tse-yen is from Taiwan. Leong Chin-fai is from Macau.

China and Taiwan have separate laws governing Taiwan-China relations due to each state claiming to be the rightful government of both mainland China and the island of Taiwan. Macau falls under a different jurisdiction, as it is an autonomous state of China.

Some of the gay couple's struggles were captured in "Taiwan Equals Love," a documentary about Taiwan's battle for marriage equality directed by Yan Zhexuan. The documentary was released by Taiwanese-based GagaOOLala, the country's queer streaming service, in 2020.

"We've waited for two years and finally we can get married," Ting Tse-yen said after the registration, showing his new ID card with his spouse's name on it.

Continuing the fight
The couple is not stopping their fight for marriage equality now that they are married. To celebrate their wedding, the couple called for Taiwan to amend its laws and open same-sex marriage to all binational couples.

"We hope our registration today will let the government see that marriage equality has yet to be realized," added Leong Chin-fai.

However, it does not look like Taiwan's government will make any moves on marriage equality anytime soon. The Diplomat reported that President Tsai Ing-wen and her Democratic Progressive party suffered major electoral defeats to the conservative Kuomintang party following Taiwan legalizing same-sex marriage.

Africa's LGBTQ rights battle shifts to Ghana
LGBTQ activists in Ghana scored a win earlier this month when 21 people were acquitted and released following arrests in May, but they are staring down a draconian anti-homosexuality bill that is the latest assault in an ongoing crackdown against the community. The bill also poses a major challenge for President Nana Akufo-Addo.

It places Akufo-Addo squarely in between international obligations and business deals and homophobic Ghanaians who voted for him, and it threatens to tarnish the Gold Coast country's sterling reputation as a "beacon of democracy" in the region, experts said.

International outcry backed by global celebrities against the anti-LGBTQ crackdown and, most recently, against the proposed bill "The Promotion of Proper Human Sexual Rights and Ghanaian Family Values, Bill 2021," appears to already be making an impact on Akufo-Addo, who only stated that marriage equality will not come to Ghana while he is president.

Observers noted his simple statement indicated that he does not like the bill.

Experts suggested the real impact Ghana could face is pressure from international donors, the United States being the biggest, funding $210 million for projects in 2018-19, reported Reuters, and legal challenges for violating international conventions, including the Universal Declaration of Human Rights, that the West African country signed onto.

Reuters reported the European Union, the United Kingdom, and the World Bank provided a total of $265 million in 2018-19.

Sidi Mohamed Tunis, speaker of parliament for the Economic Community of West African States, cited "human rights concerns" and urged caution with the bill, reported Human Rights Watch. It also threatens Akufo-Addo's standing within his country as many Ghanaians support the bill that was authored by eight lawmakers, mostly from the opposition party.

"Just as some Ghanaians who have spoken against the hate bill, the international community is concerned about Ghana's democratic credentials being wiped out by this anti-LGBTQ bill," Danny Bediako, director of Rightify Ghana, a human rights organization, told Reuters.

Reid noted in an op-ed published by the Daily Maverick that the bill's authors took all the bad parts from anti-gay laws in Russia, Nigeria, Uganda, and Hungary that discriminate against LGBTQs and added to them. "This proposed law tramples on the most fundamental human rights. It is an affront to dignity, privacy and non-discrimination. It is an assault on freedoms of speech, expression, association, and assembly," Reid wrote.

Gay sex is already punishable with up to three years imprisonment in Ghana. No one has been prosecuted under the law for years, according to local LGBTQ activists. Currently, it is not illegal to promote LGBTQ rights in Ghana; however, it is socially taboo. The community regularly experiences discrimination, blackmail, and physical assault. The bill increases jail sentences up to 10 years for LGBTQ people and allies who promote homosexuality. It also criminalizes intersex people who do not undergo "gender realignment" surgery.

Reuters reported that some political analysts believe there is enough cross-party support for the bill to become law. Lawmakers undertook the bill's first reading August 2. It will now be reviewed by a committee before being sent back to parliament for a second reading.

The bill is expected to go before lawmakers for debate in October.

Under attack, fighting back
Ghana's crackdown on its LGBTQ community has ensued since the beginning of the year when Ghanaian authorities shut down the country's first LGBTQ center in Accra, the country's capital, in February.

In May, 21 LGBTQ advocates attending a training at a hotel in Ho, a city in the West African country's southeastern Volta region, were arrested when police raided their workshop. The training was geared toward best practices for properly gathering evidence, documenting, and reporting human rights abuses against LGBTQ Ghanaians. They were acquitted and released August 2.

"The court has today struck out the case based on the advice received, and the 21 have been acquitted and discharged," Chief Superintendent Akologo Yakubu Ayamga told reporters. "It means that the case is over, and they are free."

"That has always been our argument from the beginning of this case," she told reporters. "It has been a rough journey since May but thankfully the law has spoken."

Cameroonian transgender women attacked
A mob that dragged two transgender Cameroonian women out of a taxi and beat them for a half-hour earlier this month was caught on video.

Identified only as Patricia and Shakiro, the two were in a taxi around 1 a.m. August 8 in Douala, when their car was surrounded by people who "insulted and threatened them with death," reported the Washington Blade.

"I was stripped naked and hit everywhere on my body by several people. I was kicked and slapped. I had to play dead — it was the only way to survive," Shakiro told Human Rights Watch.

The two women fled the scene when police officers arrived. They later filed a report of the incident with authorities. A video of the attack circulated on social media, reported HRW.

Even with the video, Patricia and Shakiro do not believe they will get justice in Cameroon.

In February, Patricia and Shakiro were arrested and jailed for wearing women's clothing. They were charged with attempted homosexuality, public indecency, and failing to possess an identification card.

It is common in Cameroon for transgender people not to have their identification cards on them. The gender marker is often different from the gender they present. They were sentenced to five years in prison and fined $370 (200,000 CFA) in May.

The attack happened weeks after a court order released them pending an appeal on arbitrary "homosexuality" charges, reported HRW. They were released in July.

Patricia and Shakiro were assaulted and harassed by prison guards during their incarceration.

The women are being represented by Cameroonian human rights lawyer Alice Nkom. An appeal to their case is expected to be heard in September.

The coalition's goal is to investigate how the pandemic has affected LGBTQ+ communities globally to inform future advocacy approaches, institutional/organizational decision making, and policy/legislative reform agendas, according to an email announcement from Transgender Europe, one of the coalition partners.

The survey is open to LGBTQ people over the age of 18 and representatives of groups and organizations that are led by, or work with, LGBTQ people.

For more information and to take the survey, click here.