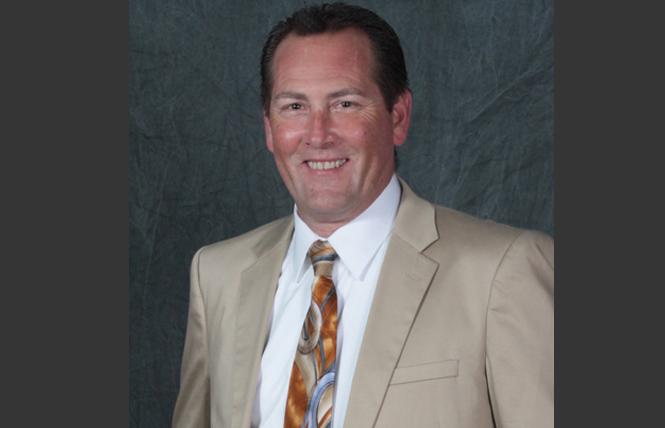 Ken Carlson, a gay retired Concord police sergeant who serves on the Pleasant Hill City Council, is looking to follow in the footsteps of his grandfather by serving on the Contra Costa County Board of Supervisors. Should he be elected next year, Carlson would be the first out LGBTQ person elected to the county board.

His grandfather, James Moriarty, was a county supervisor in the 1970s. Carlson, 58, is seeking the board's District 4 seat, as incumbent Supervisor Karen Mitchoff announced in 2019 she would not run for reelection in 2022.

The district includes Concord, where Carlson spent his early childhood; Pleasant Hill, where his family moved to in the early 1970s; Clayton; and much of Walnut Creek. As far as Carlson knows, he believes he is the first out candidate to seek a seat on the five-person board overseeing the sprawling East Bay county.

"I am tired of being the first," Carlson joked in a phone interview with the Bay Area Reporter ahead of his official campaign kickoff event Thursday, August 12.

Despite the region's liberal reputation, the Bay Area has seen few LGBTQ people elected to the nine county boards of supervisors. To date, only those in San Francisco, San Mateo, and Santa Clara counties have had out members.

Currently, there is one out county supervisor in the Bay Area: gay District 8 San Francisco Supervisor Rafael Mandelman. He is expected to seek a second four-year term next November, while transgender advocate Ms. Billie Cooper has filed to seek the board's District 6 supervisor seat.

On the Peninsula out San Carlos City Councilwoman Laura Parmer-Lohan is running for the open District 3 seat on the San Mateo County Board of Supervisors in 2022. Should Parmer-Lohan, serving this year as her city's mayor, be elected then she would become the first out woman to serve on the county board, likely its lone LGBTQ member, and the first mother on it in recent memory.

Having attended summits for out elected leaders held by the statewide LGBTQ advocacy organization Equality California, Carlson noticed an increasing number of out city leaders but a lack of out representation at the county level. With the race for his supervisor district being for an open seat, he decided the timing was right to mount a bid for it.

"We need better LGBTQ representation at the county level," noted Carlson, first elected to his council seat in 2012. "That was another motivator for me. You can do even more if sitting in that county seat."

Carlson spent 29 years with the Concord police department, retiring at the end of 2017. He is a former board president of the Rainbow Community Center, the LGBTQ center in Concord, and his husband, Jeremy, is interim executive director of the local chamber of commerce in Pleasant Hill.

Knowing his career in law enforcement will likely be a talking point in the supervisor's race, Carlson told the B.A.R. he is in favor of reimagining the duties of police officers so that calls dealing with mental health issues or social services are handled by those trained in those areas. As a supervisor, he would oversee the county sheriff's department budget.

"The reality is do you need as many cops out on the streets to do what they are tasked to do if there are other people who are better trained and qualified to provide those services," he said.

"We can build you a house but it doesn't do much good if you can't afford to live in it," he said.

Carlson pointed to his fiscal record as a councilman, noting that his council was able to survive the impacts of the COVID-19 pandemic without making drastic reductions to the city's budget reserves. And while other cities struggle to fund such basic services as libraries, he noted Pleasant Hill is building a new library set to open next year.

"If you look at my record of what we have accomplished in Pleasant Hill, that is what I am taking with me to the Board of Supervisors; that fiscal sustainability," said Carlson.

He is the second person to announce their candidacy for the supervisorial race, as Concord City Councilman Edi Birsan jumped into the race last month. Should no candidate win more than 50% of the vote in the June primary contest then the top two vote-getters will face off on the November ballot for the supervisor seat.

With more local leaders likely eying the race, Carlson wanted to also jump in early to raise money and attract endorsers. Already, the current mayors of the cities covered by the supervisor district have endorsed him, as has state Senator Bill Dodd (D-Napa).

Martinez Mayor Rob Shroder is among those on the host committee for Carlson's kickoff event, being held at 5:30 p.m. Thursday at Pleasant Hill restaurant WiseGirl, located at 1932 Oak Park Boulevard and owned by Angela Warren, president of the local chamber of commerce board.

Parmer-Lohan outraises supervisor opponents
In her race to represent the sprawling supervisorial district that stretches from the coastal towns along Highway 1 in San Mateo County to the suburban cities of Atherton, San Carlos, and parts of Menlo Park and Belmont, Parmer-Lohan is so far the top fundraiser among the four candidates who have filed to seek the District 3 seat. The incumbent, Supervisor Don Horsley, is unable to seek reelection next year due to term limits.

Should Parmer-Lohan, who with her wife has two sons — one in college, the other in high school — win the race then she would be the first out lesbian elected to a board of supervisors in a Bay Area county outside of San Francisco. Over the first six months of 2021 she raised $63,559 for her campaign.

"I continue to be humbled and overwhelmed by the community support I have received since announcing my candidacy," stated Parmer-Lohan. "With critical issues like wildfires, public health, and affordable housing, I feel a renewed urgency to hear from my neighbors about their concerns and priorities."

Fellow candidate Menlo Park City Councilman Ray Mueller netted nearly as much as Parmer-Lohan during the first half of this year. He reported $103,828 in donations, with nearly $90,000 in his campaign account.

Half Moon Bay resident Steven Booker, the International Brotherhood of Electric Workers' political director and community affairs liaison since 2014, raised $49,595 for his campaign and had spent close to $15,000 as of July 1.

The other candidate seeking the seat, San Mateo County Harbor District Board President Virginia Chang-Kiraly had raised $80,652.10, including $50,000 she loaned to her campaign. A resident of unincorporated Menlo Park, she reported $74,529 remaining in her account last month.

Their primary election will also be held in June, with the top two vote-getters advancing to the November ballot should no one capture the seat outright next summer.