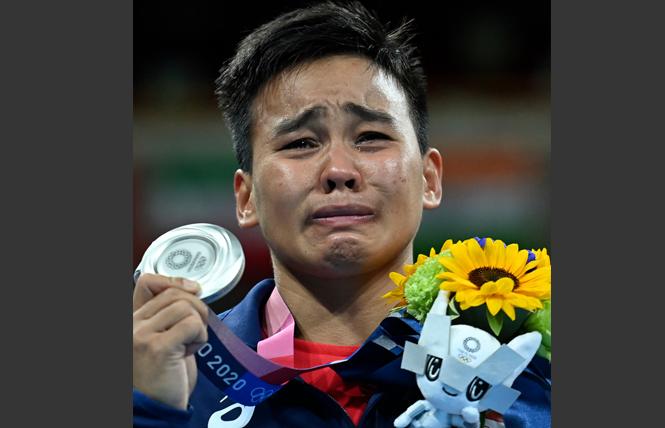 Notes on the concluded Tokyo Olympic Games as Japan figures out how much (if any) of the estimated $20 billion-plus it spent to stage the event it can recoup while the International Olympic Committee collects its $3 billion-plus.

• These Olympics were the biggest challenge to the heterosexist/gender-binary underpinnings of sports we've ever seen.

On the gross level there were projections that more than 180 LGBTQ+ individuals competed and won 32 medals — above the Netherlands and just shy of the total for Australia. That swamps the total "out" participation in all past Olympics, winter and summer. Highlights included gay British diver Tom Daley scoring gold and knitting a cardigan; nonbinary midfielder Quinn, who uses one name, becoming the first openly transgender athlete to strike gold, winning their medal with the Canadian women's soccer team; and out Filipina boxer Nesthy Petecio in tears after winning silver in boxing, saying, "I am proud to be part of the LGBTQ community. Sulong, laban! Para rin po sa LGBTQ community ang laban na 'to." Translation: "Let's go, fight! This fight is also for the LGBTQ community."

• All that historic queerness triggered predictably nasty pushback from the usual suspects. Russian media in particular referred to the gay men, lesbians, and transgender athletes in the Olympics with terms such as perverts, psychopaths, abomination, and smut. Reminded me of the campaign for California's Proposition 8 years back.

• Tass, on the other hand, was fairly mum on the topic. The Russian news agency spent its energy bewailing Russia's failure to win gold in rhythmic gymnastics. I mean, it was really, really worked up about it. It's practically threatening to take its ball and ribbon and leave the sport entirely.

• Hey, wait a minute: Weren't the Russians banned from the Olympics because of their institutional, pervasive use of banned performance-enhancing drugs?

No, not really. They were banned from competing as a nation, their flag was banned, and the national anthem was banned. What we got instead were a ton of Russians competing under the initials ROC (no, that didn't stand for the Republic of China, the official name of Taiwan, but Russian Olympic Committee), Tchaikovsky greatest hits for gold medal presentations, and the colors of the flag used to make a logo that looked a helluva lot like the Russian flag. As punishments go, this was about as mild as the wrist slap former judge Aaron Persky gave rapist Brock Turner.

• Belarusian sprinter Krystina Timanovskaya was ordered by team officials to return home early after she criticized coaches for asking her to run in a sprint for which she had not tried after it turned out that the national program, directly connected to the ruling family, had brought relay runners who hadn't passed mandatory drug tests. Belarus attempted to whisk her away to face criminal charges, but Timanovskaya refused and was granted asylum with Poland.

Wait for Tucker Carlson to broadcast a special from Belarus praising the government for its no-nonsense handling of unruly athletes.

• One of the dirty truths of Olympic sports drug testing programs is that allowable testosterone levels are based on studies of people of European ethnic descent. You know: white folk. This has in some cases hindered the eligibility of Asian and African runners.

Take Namibian sprinter Christine Mboma, who won silver in the 200-meter women's dash but was not allowed to run the 400-meter because she has a naturally high level of testosterone.

Why is the allowable limit of natural testosterone different for 200 meters than 400 meters? Because in order to block world champion sprinter Caster Semenya, who also has a high testosterone level, from competing, the international track federation cherry-picked her distances to require lower levels. Beatrice Masilingi of Namibia, Francine Niyonsaba of Burundi, and Margaret Wambui of Kenya have all been blocked from running by the rule. Track officials say they can run if they take medically necessary drugs to lower their natural testosterone.

Somebody hold my beer.

• Remember when the Olympics were on one free channel and you didn't have to do a full-press internet search to find when and where the hell you could view coverage of your preferred sport? Thank goodness we now have multiple channels and streaming services and web carriers to bring it all to us provided we had paid for the right subscriptions and remembered to pay for premium coverage.

In case you missed it in all of the confusion, do yourself a favor and search out video online of Gable Dan Steveson's gold medal match against reigning three-time freestyle wrestling world champion Geno Petriashvili of Georgia. Steveson, 21, is a relatively inexperienced freestyle wrestler who was seeded just 11 in the tournament, but did not give up a point en route to the final. Stick with the match all the way through and to the point Steveson literally flips out. Guarantee you've never seen anything quite like it and likely never will again.

Taiwan and the Hong Kong Gay Games
The Taiwan Gay Sports and Movement Association is a voting member of the Federation of Gay Games, which is the licensing body that sanctions the quadrennial Gay Games. Reports this month indicate it is unlikely Taiwan will be able to have much, if any, representation when the games make their first entry into Asia next year in Hong Kong.

"We have decided not to send a national delegation as we don't expect to be able to join as Taiwan and to ensure personal safety of the athletes," Yang Chih-chun, president of TGSMA, told Agence France-Presse. "We won't actively encourage individual participation since there's no guarantee of a player's personal safety. Under Hong Kong's national security law, arrests can be made under any excuse."

Yang Chih-chun said his organization would do what it could to help any Taiwan athlete who wanted to participate individually.

HK2022 organizers responded with a statement on the Gay Games website that said, in part, "Since the beginning of the Games in 1982, participants have been taking part in the games on an individual basis, transcending national and geographic boundaries. TGSMA is an official member of the Federation of Gay Games, the governing body of the Gay Games, and has participated in previous games. We are glad to hear they remain supportive of the Hong Kong Games and have announced they will assist any Taiwan participants interested in attending on an individual basis. We warmly welcome our friends from Taiwan to join us at the Hong Kong Games."

It is true that athletes and artists do not attend the Gay Games as representatives of nations. It is just as true that they march into opening ceremonies behind banners denoting the nations from which they come. In the 2018 Gay Games in Paris, organizers made them march behind a "Taipei, China" banner but the athletes themselves proclaimed themselves as being from Taiwan and carried their own signs and flags stating the same.

The mainland People's Republic of China has never had sovereignty over Taiwan but has made clear its intentions to impose its will on the island nation and has consistently pressured countries and corporations not to use the name Taiwan or allow the country's name or flag to be used at events.

Gay Games organizers have asked "participants and visitors to respect and observe local laws and customs during their stay in Hong Kong." Those laws do not include anti-discrimination protection for LGBTQ+ individuals, same-sex marriage, or direct democratic elections.

"We think the safety of Taiwanese athletes is a priority, and if our rights and safety cannot be fully protected, I'm afraid I must refuse to lead the team to participate in the Gay Games," Yang Chih-chun told Singapore-based Channel News Asia.

EuroGames 2021 get started
The 2021 EuroGames are scheduled to open next week in Copenhagen, Denmark and Malmö, Sweden in conjunction with WorldPride.

"We have approximately 2,000 athletes competing in 22 sports," EuroGames spokesman Steve Taylor said. "Tournaments begin Tuesday 17 August and run until Friday 20 August. We haven't had to change the sports program because of COVID-19 regulations, but it has impacted on the number of attendees. However, we're still super excited for a brilliant, diverse EuroGames welcoming athletes from more than 50 countries."

Jock Talk: I'm baaaaaack! Now, what did we miss?
Sign up!