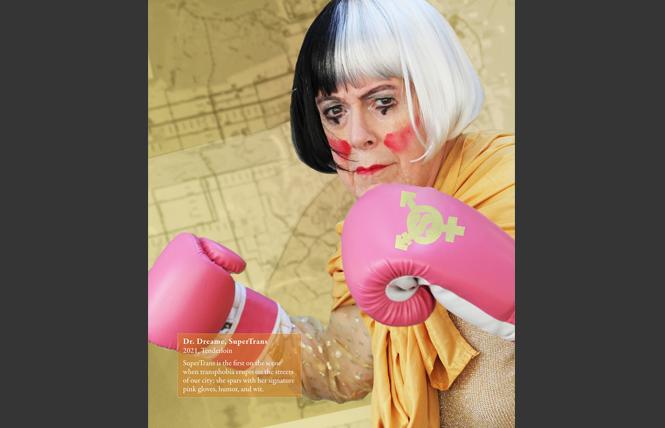 Dr. Dreame is SuperTrans in this poster that is part of Skywatchers' "The Opulence Project" for the San Francisco Arts Commission's Market Street Poster Series. Photo: Courtesy SFAC

The San Francisco Arts Commission invited artists to reconsider, respond to, and reimagine the idea of a public monument. In this second installment of the series, Skywatchers, a program of ABD Productions, expanded "The Opulence Project," using the highly visible posters to extend its mission of challenging the kinds of stories traditionally memorialized in monuments, a news release stated. For example, Wanda is the Goddess of Food, generously feeding her community. Dr. Dreame is SuperTrans, a superhero fighting transphobia on the streets. Joel is The Eternal Elegist, writing the grief of his community into dreams of resilience. Each of the nine portraits in the series uplifts the participant's desires, strengths, and joys. The release noted that portrait subjects worked closely with Skywatchers creative leads Gabriel Christian and Deirdre Visser, from conceptualization to the design of their image, crafting intricate stories alongside the portraits.

"The Skywatchers poster series is a powerful expression of a community that is often marginalized, grouped together as statistics, and denied their individuality," stated Ralph Remington, the city's director of cultural affairs. "The portraits give voice to each individual's dreams and vision of who they are by manifesting their heroic image and by having a hand in creating it, crafting the look and the story of who they are. It's a reminder that every person deserves to be venerated and to have their story hold space."

The project narrative notes that the coronavirus pandemic had laid bare the ways existing systems and stories have proved unable to protect people. "The need for new narratives is urgent, as old monuments and methodologies fall and fail," it states.

Pink Triangle Park seeks donations
The Eureka Valley Foundation, which oversees Pink Triangle Park and Memorial, has issued a call for donations as it needs ongoing funds for the maintenance of the small tribute to LGBTQs killed by the Nazis in World War II. The roughly 3,000 square foot triangular park is situated at the northwest corner of Market and Castro streets (bordered by 17th Street). It features a memorial consisting of 15 pylons created by artists Susan Abbott Martin and Robert Bruce.

According to an appeal from the foundation that was included in the recent Eureka Valley Neighborhood Association newsletter, funds are needed for the park's monthly water bills, replenishing the rose quartz in the central triangle, vandalism abatement, dog damage, irrigation repair and maintenance, and new drought tolerant plants.

Jason Poindexter, steward of the park, also stated that there are a couple of deferred maintenance items: a lighting system that hasn't worked in over two years and the granite pylons that are structurally failing.

"Neighborhood volunteers and I will continue maintaining and improving the memorial as best we can," Poindexter stated. "However, we cannot do this without ongoing financial support from the community. We need your help."

To make a monthly or a one-time donation directly to the park go to the PayPal page.

According to the district, "The goal of this survey is to learn about LGBTQ+ community members' experiences in the Castro district and how they feel about community representation in the neighborhood. We also seek to explore current perspectives about the rainbow flag, a common symbol used to represent the LGBTQ+ community."

In June, the cultural district's board voted that the Gilbert Baker-designed rainbow Pride flag that currently flies above the intersection of Market and Castro streets should be replaced with the Progress Pride flag. That nonbinding decision has reignited debate over the flag, which is maintained by the Castro Merchants Association. The merchants group announced that it would support a second flagpole that could fly the Progress and other LGBTQ community flags.

The cultural district's survey does not appear to ask any questions specifically about the flag. Rather, it asks about how people feel when they are in the queer neighborhood and whether they find the area welcoming.

"This survey explores LGBTQ+ community members' opinions to prepare for a community town hall discussion focusing on people's feelings about neighborhood representation and the future of the flag in the plaza," the survey states. "The authority over the flag in Harvey Milk Plaza lies with the Castro Merchants Association and San Francisco Arts Commission. We would like to gather broad community opinion, and this data will be used to inform neighborhood leadership and explore whether the community would like to see a shift in the ability to use that flagpole and how the flagpole is used."

A pre-conference takes place the first day, along with the Rainbow Connection. The following days include workshops, panels, and community building.

The featured keynote speaker will be Shakina Nayfack, who starred in NBC's "Connecting...". Nayfack is also the founding artistic director of Musical Theatre Factory, where she helped to develop hundreds of new musicals, including Michael R. Jackson's Pulitzer Prize-winning "A Strange Loop," and her own autobiographical glam rock odyssey, "Manifest Pussy." She is also a longtime LGBTQ harm reduction and public health advocate, and holds an MFA and Ph.D. from UC Riverside and a BA in community studies from UC Santa Cruz, where she focused on using theater and film for HIV and overdose prevention, sex worker wellness, and queer youth empowerment.

The conference theme is "Building Up Together," and the event will feature workshops, performances, and networking opportunities.

"We are experiencing reduced ways of interacting with each other for safety reasons, as well as decreased capacities mentally, emotionally, and financially," an online conference description states, referring to the COVID-19 pandemic. "There is no lack of work ahead of us, and building up together is one way forward. The need for solidarity with queer and trans BIPOC folks in our communities continues to include various calls to action, along with the need for us to support one another across communities, even more going forward."

Keynote speakers are Tobi Hill-Meyer (August 20) and B. Cole (August 21). An email stated that both are longtime Butch Voices participants and mentors in the community.

Tickets range from $10 to $25, and scholarships are available for 30 queer and trans bois of color who are under 30. To apply, click here.

Castro cultural district to have survey on Pride flag
Sign up!