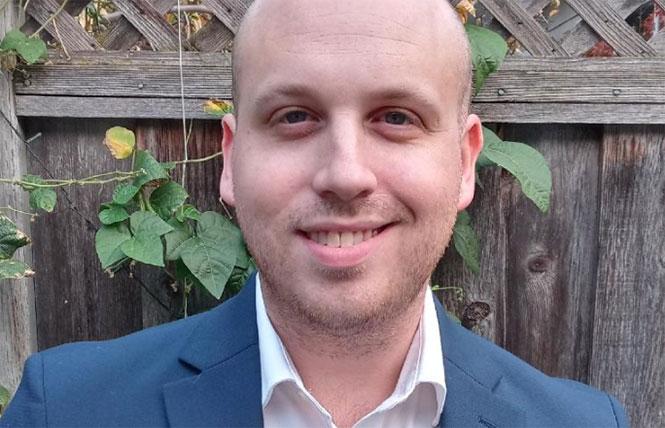 For years Santa Clara native Anthony Becker sought to have a say in the direction of the South Bay city. He ran unsuccessfully five years ago for a City Council seat then came up short in his 2018 mayoral bid.

Undaunted, Becker landed a seat on the city's planning commission and used that perch to mount a winning bid for council last year. His victory made him the first gay councilman in Santa Clara and only the second LGBTQ person to serve on the City Council. (Jamie McLeod-Skinner, a lesbian elected in 2004, was the first and served two four-year terms.)

Seven months into his first term Becker is still adjusting to his new role, going from making suggestions as a planning commissioner on various development projects proposed for the city to having final say on if they are approved or not.

"Being a council person, it is different," Becker told the Bay Area Reporter during a recent phone interview. "Basically, I am picking up where I left off on projects I was pushing for as a planning commissioner and deciding on them as a council person."

One such issue for Becker, who turns 36 this month, is allowing marijuana dispensaries to open in Santa Clara. The city's voters in 2018 passed a measure that would allow such businesses to operate and provide needed tax revenues for public safety services.

Three years later, however, and there are still no places in the city selling marijuana products as the City Council has yet to implement the voter-approved Measure M. Earlier this year Becker tried to convince his council colleagues to allow for up to three dispensaries to open but was unsuccessful. The council voted 4-3 to keep in place the moratorium against such businesses.

"There is still a lot of stigma, I guess, here in Santa Clara," said Becker, "yet the voters said yes."

With the city facing a $29 million budget deficit, Becker tried to make an economic argument for allowing marijuana dispensaries and growers to operate in Santa Clara. While he was unable to persuade a majority of his council colleagues on the issue, Becker said he intends to continue pressing the matter. He pointed to the economic benefits San Jose is reaping from its being able to tax pot sales.

"This is millions they are making," he said. "We are looking at cutting deficits."

Another vexing issue has been the city's oversight of the stadium built in Santa Clara by the San Francisco 49ers. The football team has repeatedly clashed with city leaders and staff about the facility, from how it is managed to what the city is owed in stadium rent, leading to ongoing legal disputes.

During last year's election team owner Jed York pumped millions of dollars into the council races to help elect Becker and several other council candidates. They were painted as being aligned with the 49ers, which Becker strenuously refuted at the time. But the accusations continue to be thrown at Becker and several other council members whenever issues regarding the stadium management are brought up.

Once such debate this year has centered on the seat license fees for 64 temporary seats the 49ers paid to install and plan to sell for $10,000. Becker and other council members have met with team officials about the issue, leading to criticism they are working on the 49ers behalf.

"As soon as you do, people think you are a sell-out," Becker said of whenever he or his fellow council members try to address stadium-related matters.

It is another area where Becker contends the city could be increasing revenues but isn't due to the animosity between city officials and the team.

"Anything positive that comes from the 49ers, they will shoot down immediately," said Becker, who would like "to find a common ground" that benefits both the city and the team.

With congestion already a concern around the stadium during game days and more development slated for the area, Becker is a proponent of seeing the planned BART extension into the city from downtown San Jose add a stop closer to Levi's Stadium. The current plans call for the line to end in downtown Santa Clara near the campus of Santa Clara University when it opens in 2030, according to the current timeline.

"I have asked if there are any plans for expanding the line. We are not thinking about the future half of the time," said Becker, who has also fielded concerns from constituents that the planned downtown Santa Clara BART station could be scrapped. "I am not in favor of getting rid of it. We need that stop, as it will be very beneficial not only for university students but also Santa Clarans because they will have access to downtown."

Bevan Dufty, a gay man who serves on the BART board, told the B.A.R. there is no talk he has heard of scrapping the Santa Clara Station. It will add to the success of the extension and help to boost ridership, he argued.

"We are very committed to it," said Dufty. "We don't think this line will get truncated."

By August, Becker expects to take part in his first in-person council meeting. He is pushing for the city to create a homelessness task force and remains optimistic he can come back with a revised proposal to allow for the opening of marijuana dispensaries that will garner majority support among the council.

And Becker, a freelance filmmaker who graduated from San Jose State University with a degree in radio film and television, would like to see the city create a film commission that could bring in additional revenues by attracting productions of movies and TV shows. It would not only be a budget windfall for the city but also benefit local businesses, he said.

"It will put Santa Clara on the map," said Becker.

Despite having to conduct most of his city business remotely due to the COVID-19 pandemic, Becker is proud of the fact he has still been able to address constituent needs. He pointed to one example where homeowners had fought for a decade with the city over maintenance of a tree that was rotting and causing problems with their sewer line. After he made some inquiries, the tree was finally removed.

"Within three days I get a phone call and email from the residents saying, 'Thank you so much,'" recalled Becker, whose grandparents first moved to the city in the 1950s.

As for serving as a councilman, Becker said sometimes it still hasn't sunk in.

"I would never trade it for anything. It is something I have wanted to do for years, since I was a kid," he said.