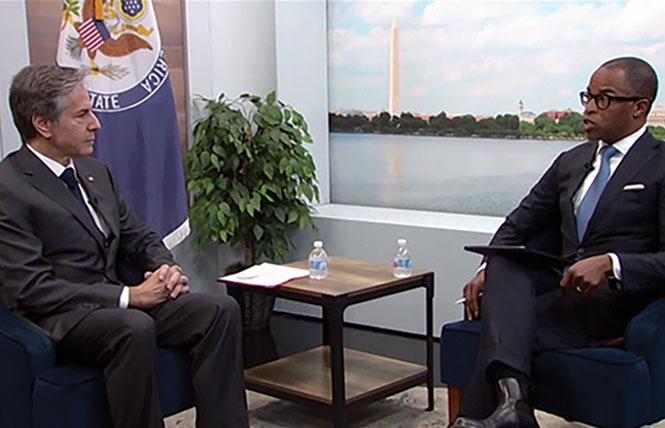 The two men opened the discussion, "Pressing for Equality: Engaging on LGBTQI Issues Around the World," noting the challenges and human rights abuses LGBTQ people around the world face daily. The interview was hosted by the Atlantic Council's Front Page Pride Edition Virtual Conversation June 21.

Blinken, 59, called LGBTQ rights "one of the leading human rights issues of our time," summarizing some of the ways queer people are affected by being targeted, scapegoated, and denied equal access to health care, housing, employment, and justice.

"For some, simply living openly as their true selves can be incredibly dangerous," Blinken said.

Blinken addressed the ways LGBTQ rights are being woven into the daily work at the State Department and throughout the foreign service, improving diversity issues within the department, and some pressing LGBTQ issues.

Blinken was fresh off his trip to Geneva, where he was with President Joe Biden as he met with Russian President Vladimir Putin. Just days later, Biden announced that he appointed veteran global LGBTQ rights leader Jessica Stern as a special envoy. (See related story.)

In February, gay State Department spokesman Ned Price expressed concern about two Chechen brothers, who were accused of being gay and hiding in Russia when they were arrested and returned to Chechnya. Chechnya has carried out a harsh systematic mass crackdown against LGBTQ people since 2017 that has been denounced by the European Union and human rights activists globally. Hundreds of people have reportedly been detained and tortured by police, and some have died.

It has led to a large-scale relocation action of queer Chechens led by the Russian LGBT Network with support from Canada's Rainbow Railroad and human rights activists around the world. Putin has denied claims and multiple investigations' findings of Chechnya's LGBTQ crackdown.

"We didn't get into specific cases in that meeting, but [Biden] made [it] very clear to President Putin that [human rights, including LGBTQI rights,] is fundamentally who we are, and who he is, and what we'll do, and will continue to do going forward," Blinken responded.

Blinked glibly responded, "You should ask the Russians," not wanting to "characterize" Putin's response.

Responded Blinken: "I think it's fair to say that there was at least an acknowledgment of that basic fact of life. This is what an American president should do. This is who we are, and this is what we represent to the world.

"When we're trying to advance, defend, support the protection of LGBTQI persons around the world, we want to make sure that we're doing this in a way that takes into account the specific situation, conditions in a given country," he continued.

He described the department's quiet daily work integrating LGBTQ rights in diplomats and staff's work across all bureaus, intricately dealing with issues country-to-country.

Advocates express concerns
During the event, Coco Lim, a program associate for Latin America and the Caribbean at Freedom House, expressed concern about the U.S. losing momentum on progress securing LGBTQ rights in Latin America.

Lim pointed to the recent murders of prominent Guatemalan transgender activists Andrea Gonzalez, 28, and Cecy Ixpata as an example of the fact that crimes against transgender women "often go unpunished and sometimes uninvestigated."

Killings of LGBTQ Guatemalans have been ratcheting upward, with 13 known so far in 2021, according to the National Observatory of LGBTIQ+ Human Rights.

Gonzalez and Ixpata were killed within days of each other in two separate attacks. The Washington Blade reported that their deaths happened less than a week after they were among 18 Guatemalan HIV/AIDS and LGBTQ activists who met with Vice President Kamala Harris June 7. The meeting happened during Harris' first trip abroad where she traveled to Guatemala and Mexico to address the migrant crisis.

Harris previously listed violence against LGBTQ people among the "root causes" of migration from Guatemala and other Central American countries. Protecting LGBTQ migrants and asylum seekers from violence is a global priority of Biden's administration, Price told the Blade last month.

Julie Chung, acting assistant secretary for the State Department's Bureau of Western Hemisphere Affairs, condemned the killings. On Twitter she called for an investigation and for the perpetrators to be held accountable.

Blinken said that he will speak about Gonzalez and Ixpata's killings at the United Nations during the State Department's first-ever sponsored side event on the rights of transgender and gender-diverse people worldwide, he said.

Lim wanted to know how the U.S. will help "revitalize efforts" to end violence, discrimination, and impunity against SOGI individuals in Latin America and address governments' hostile actions that are creating instability.

"We have in a whole host of countries efforts underway to push back against discriminatory legal frameworks and laws," Blinken said.

Last month, Harris announced the creation of a task force to fight corruption in Central America, particularly in Guatemala and in neighboring Honduras and El Salvador, by the Justice and State Departments.

Blinken noted that Lim put her finger on a "very stark and very powerful" reality about a "democratic recession" occurring around the world that has been happening for what he estimated to be 15 years or so and is "getting deeper" over the last few years.

LGBTQ people are one of the groups caught in the struggle for democracy as some governments revert to authoritarian and other dictatorial powers.

Blinken explained that correcting and making a U-turn on the trend "really starts with putting democracy and human rights, including the rights of the LGBTQI communities, at the heart of our foreign policy."

Blinken added it was "not like flipping a light switch," but actions taken in a "sustained, focused, and determined way," which is happening at the State Department, bureaus, and Foreign Service daily and through multilateral efforts, should yield results within the next few years.

He also spoke about the department's work with the Global Equality Fund, a public-private partnership celebrating its 10th anniversary, helping to catalyze and provide $83 million in emergency support to LGBTQ communities in more than 100 countries around the world.

We have a "tremendous opportunity" and an "obligation to make sure that we're doing everything we can to advance human rights and democracy more broadly and to support and advance and stand strong for LGBTQI rights more specifically," he said, noting that at the end of the day "we'll get judged by results."

"We're committed, we're focused, we're determined, and my hope, my expectation, is that over the course of these next few years, we'll actually make progress," he added.

Blinken said that efforts to stem the tide against democracy will start to bear fruit in the coming years.

"My hope is that over the next few years we'll actually start to turn the corner and see progress again, not regression," Blinken said.

Leading by example
Meghan Luckett, a public affairs officer from the U.S. Embassy in Malabo, Equatorial Guinea, and State Department employee Austin Richey-Allen, a transgender man who is deputy consular chief at the U.S. Embassy in Kathmandu, Nepal, addressed diversity issues within the Foreign Service.

The heat has been on Biden to nominate the country's first lesbian or transgender ambassador. As of June 15, there are 90 positions open and only 12 ambassadors have been nominated. Only one appointee, Rufus Gifford, is a gay man. The White House announced Gifford's nomination as chief of protocol May 28.

Luckett noted that all 13 of the LGBTQ ambassadors appointed since 1999 have been white gay cisgender men. She asked Blinken what the department was doing to ensure diversity, especially among LGBTQ and people of color, was reflected at the highest levels at the State Department.

Blinken would not go into specifics about ambassador appointments, stating when the appointments to senior positions at home and abroad are announced, "we'll be able to show a real reflection of the diversity of the community itself in those appointments."

"What you'll see will be an answer to that question," he added.

Blinken pointed to the State Department's newly drafted employee and management rights and responsibilities book for transgender individuals serving at the department and abroad published in April.

The manual was created in consultation with the Gays and Lesbians in Foreign Affairs Agencies, known as GLIFAA, he said.

He also said the department appointed its first-ever chief diversity and inclusion officer, who reports directly to him. The office has a team to help carry out "addressing and making progress on building a more diverse and inclusive" workplace that "we reflect the people that we represent."

Blinken also noted the talent drain among people of color, LGBTQ people, and diverse communities happening at the State Department.

"We've done a bad job in addressing the particular concerns and particular challenges faced by people coming from diverse communities that many of us are simply not in tune with or aware of," he said.

He outlined laying a foundation for inclusion, followed by recruiting, reaching out early in the pipeline, retention, development, and promotion of talented diverse staff, including LGBTQs; and accountability and disaggregated data to measure the department's progress meeting diversity goals.

"The strength, the power of our own example, the willingness to speak up, to speak out, to show the strength of our own diversity, including at our embassies, I think sends a hugely important message," he added.

The virtual event was hosted by the Atlantic Council, which is promoting LGBTI leadership throughout the foreign affairs and national security community through its LGBTI Advisory Council, LGBTI in Foreign Affairs Fellowships, and Out in Energy network. It was co-hosted by GLIFAA.

The video is below.

Out in the World: China's WeChat shuts down LGBTQ accounts
Sign up!