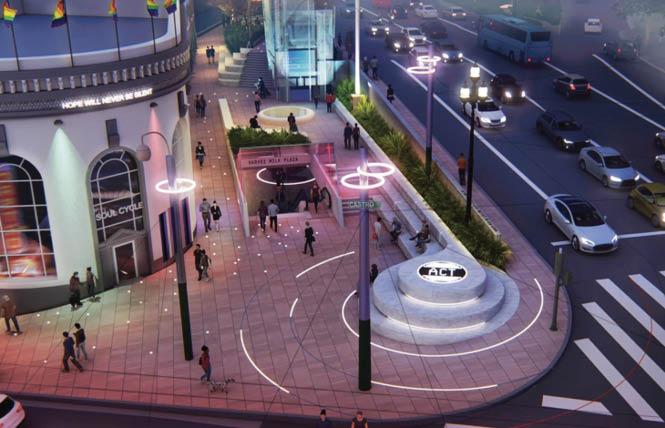 Harvey Milk's quip that "whoever can solve the dog shit problem can be elected mayor of San Francisco, even president of the United States" will be engraved in the Castro neighborhood plaza that bears his name if the preliminary design proposal for the space becomes reality.

The Friends of Harvey Milk Plaza revealed the proposal at two virtual presentations June 23 and 24, respectively, replete with features to evoke the memory of the late gay supervisor.

The jest, as students of San Francisco's LGBTQ history know, came when Milk spearheaded an ordinance to require dog owners to pick up after their pooches and carry a "suitable container" for disposing of their waste. (Obviously, the ordinance is oft-ignored.)

As the Bay Area Reporter reported last April, the friends group held two town halls to solicit community feedback about design proposals. That town hall saw respondents seeking a monument that focused more on the movement than the person and that was more unconventional than standard.

The plaza renovation is estimated to cost $10 million.

"First and foremost, people want to honor Harvey Milk," Brian Springfield, a gay man who is the interim executive director of the Friends of Harvey Milk Plaza, said. "But they also want the space to tell a broader and more inclusive story. ... Raising up Harvey allows us to raise up others at the same time."

Springfield said that after the April town halls SWA Group, an international landscape, architecture, planning, and urban design firm that is working on the project, took that into consideration as it came up with the preliminary proposal revealed this week.

"We've been meeting with community leaders, including members of the Castro LGBTQ Cultural District, and people who knew Harvey Milk," Springfield said. "The renderings you are going to see are photo-realistic, but remember this is a conversation and it's ongoing."

Daniel Cunningham, a gay man who is a landscape architect with SWA Group, walked the attendees through the memorial design.

"The project is inspired by hope and action," Cunningham said, adding that the intention of the designers is to "balance these two different things, overlaying them on the site."

Therefore, action will be most represented at the intersection of Castro and Market streets, "where everything is happening," Cunningham said. As people make their way to Collingwood through the plaza, the focus will shift to hope.

At the mouth of the plaza, at Castro and Market streets, will sit "an expanded plaza" and a pedestal, the latter of which symbolizes Milk's activism.

Cunningham said that the pedestal can also serve as a ligation for sightseeing, touting it as potentially "a location for tourists to take in that view but also an opportunity for us to take in the beauty of the Bank of America [SoulCycle] building and the Castro Theatre."

SFMTA issues
Yet, the design will have to take into account the San Francisco Municipal Railway station below, which is why Cunningham and Springfield spoke with Jeffery Tumlin, a gay man who is head of the Municipal Transportation Agency, about his thoughts.

Eric Heiman, who is working on the project, said that "in the macro sense, we see it as the beating heart of the memorial because we see Harvey in pictures and words most clearly" there.

"In addition to the monument of dynamic content," Heiman said, there will be "the fixed content on transparent glass ... that changes color."

Further along, the proposal would raise the garden end of the plaza, both to make it more accessible and to prevent people from doing things there that "they shouldn't be doing in public," Cunningham said.

"This design allows for a wheelchair to go from Collingwood to Castro," Cunningham added.

The memorial grove will include 11 trees, of different kinds, symbolizing Milk's 11 months in office before his November 27, 1978 assassination by disgruntled ex-supervisor Dan White, who also killed then-mayor George Moscone. The last feature of the plaza will be a "hope grove," symbolizing the candlelight vigil that took mourners from the Castro to City Hall after Milk and Moscone were slain.

"Sometimes our community needs more hope, and sometimes we're more active-focused," Cunningham said, explaining different parts of the plaza can be lighted differently depending on what's happening in the neighborhood.

It is at the hope grove that Milk's "dog shit" quote will be etched, Cunningham said. A station to assist dog owners and walkers in cleaning up after their canine companions is also proposed to be installed at the area.

The renovation of the plaza is taking place concurrent with, but separately from, SFMTA fixes to the space. SFMTA's Castro Accessibility Project will include a four-stop elevator, as the B.A.R. recently reported. SFMTA's website states construction is slated to start this fall on the $14.5 million project. It is scheduled to be completed in 2024.

Tina Valentin Aguirre, the manager of the cultural district, expressed approval for the preliminary design.

"I'm very happy with the new design because it is the result of many conversations with LGBTQ people of color, transgender leaders, youth leadership, and powerful lesbians," Aguirre stated.

"The imagery of us represented as critical parts of the LGBTQ movement is clear and important. The legacy of Harvey Milk is that of a multitude of voices from activists that effect change, from the days of Gay Liberation Fronts and radical lesbians to Black Lives Matter and Transgender leaders of today."

But Howard Grant, who designed the plaza in the 1960s along with the Castro Muni station and others located along Market Street and came out as gay years later, was unimpressed. Grant has been opposed to the plaza redesign from the beginning.

"Upon reviewing the latest plaza redesign plans presented by the Friends of Harvey Milk Plaza last evening on Zoom, I am appalled at the lack of civic responsibility by all parties involved in the FHMP project," Grant stated in an email to the B.A.R.

"The issue isn't how imaginative SWA's proposed design is; they are a well-respected design firm for a reason," Grant stated. "But continuing to repeat Harvey's 'Keep Hope Alive' and engraving 'HOPE' on granite does not obscure the fact that this project is environmentally and socially irresponsible. As we have asked from the beginning: What would Harvey do?"

He listed several concerns, including tons of concrete waste sent to landfill if the plaza is redone; and the anywhere from $10 to possibly $20 million the plaza friends group may need to raise at a time when the Castro is experiencing homeless and social issues; and that the presenters failed to mention the fact that local planning officials found the plaza site to be historically important.

Tumlin did not respond to immediate requests for comment.