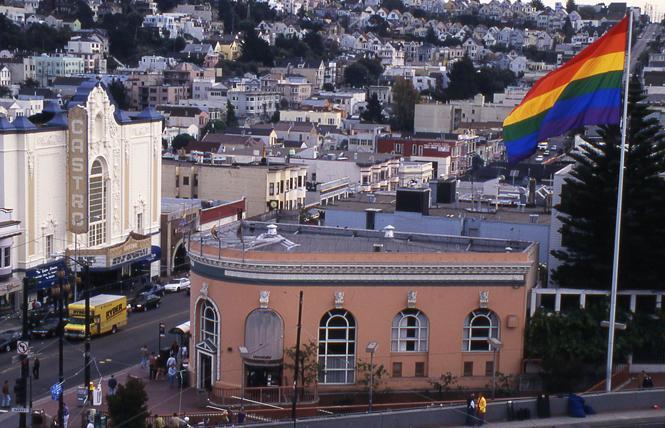 The Castro Merchants Association, which maintains the giant rainbow flag at Castro and Market streets, has proposed a second flagpole in the LGBTQ district so that other Pride flags can be flown. The move came after the Castro LGBTQ Cultural District board voted in favor of replacing the Gilbert Baker-designed flag. Photo: Rick Gerharter

The Castro Merchants Association is seeking to install a second flagpole in the Castro neighborhood to fly another design of the Pride flag, the group announced in a late-night news release June 23.

The move comes after the Castro LGBTQ Cultural District Board of Directors voted that the Gilbert Baker-designed rainbow Pride flag that currently stands above the intersection of Market and Castro streets should be replaced with the Progress Pride flag, the merchants stated in the release.

According to preliminary minutes from the cultural district board, the vote on the motion "That the Castro LGBTQ Cultural District recommend that the flag be changed at Harvey Milk Plaza" was seven in favor with two opposed, with members Stephen Torres and Steven Bracco voting against, and members Cesar Cadabes, Ms. Billie Cooper, Carnell Freeman, Elizabeth Lanyon, Levi Maxwell, Sacred Mitchell and Tahirah Rasheed voting in favor. (Bracco writes for Hoodline.)

The vote is unenforceable, the merchants stated, since it is the merchants association and not the district that "does pay for and maintain" the flag, but the merchants suggested the second flagpole as a "counterproposal."

"We propose to leave the internationally recognized, beloved, and historic symbol where it is and explore locations in the Castro to install a new flagpole," the release states. "We believe the creation of an alternative space would best reflect our two sincere beliefs: symbols can change over time yet queer history matters."

The release does not give a prospective location for the second flagpole. The merchants did not respond to an immediate request for comment.

The merchants group has long sought to maintain the flag that is currently there, in spite of the new rainbow flag designs that have been adopted elsewhere in recent years. As the Bay Area Reporter reported last June, San Ramon, Dublin, and Sacramento have flown alternative flags that are intended to be more inclusive of marginalized communities; specifically the Progress Pride flag (which includes a chevron with the colors of the transgender flag, as well as brown and black stripes), in the case of the latter, and the Philadelphia Pride flag (which features black and brown stripes on the top), in the case of the two former municipalities.

The Progress Pride flag was unveiled in June 2018 by nonbinary designer Daniel Quasar. The Philadelphia Pride flag is so named because it was first adopted there in June 2017 after being designed by the marketing firm Tierney.

Many cities in San Mateo and Alameda counties this month are flying the Progress flag in front of their city halls at the request of LGBTQ residents. San Francisco officials for the first time raised a Progress flag sent from sister city Cork, Ireland at City Hall Sunday, May 16, ahead of the International Day Against Homophobia, Transphobia, and Biphobia, which is annually observed May 17 in scores of countries around the globe.

The B.A.R. last August editorialized in favor of "a flag design that expands inclusivity" being flown from the Castro flagpole. Several online petitions at the time collected signatures in favor of replacing the flag as well. One, started by San Francisco resident Gage Lennox, urged that the Pride Progress flag replace the Baker flag, and received 473 signatures. Another, launched by San Francisco resident Joel Sierra, urged the Pride Philadelphia flag be the replacement, and it garnered 696 signatures.

In a Guest Opinion following up to that editorial, Castro Merchants President Masood Samereie stated that "we would support any community effort to erect an additional flagpole or some other installation in a significant location in the neighborhood to fly flags that symbolize the diversity of our LGBTQ+ residents and visitors, and would use any influence we have with the city to push this through."

That is now what appears to be happening.

"We also see, hear, and acknowledge that there is a real desire by some members of the Castro community to continue to fly the rainbow Pride flag," the merchants stated June 23. "Hundreds of thousands of gay, bisexual, trans, and queer people in the United States died of AIDS while activists — many of whom themselves succumbed to the epidemic — fought, pleaded, lobbied, petitioned, marched, and protested (and continue to do so all over the world!) while carrying this flag and its predecessors, all designed by Gilbert Baker."

The Baker flag came about when late gay supervisor Harvey Milk had urged Baker, a gay artist, to design a symbol for the 1978 parade. With the help of his friends Lynn Segerblom, who now lives in Southern California, and James McNamara, who died of AIDS-related complications in 1999, Baker came up with a rainbow flag design that had eight colored stripes, with one version also sporting a corner section of stars to mimic the design of the American flag.

Baker would go on to reduce the number of colored stripes to just six and turned the rainbow flag into an international symbol of LGBTQ rights. He died unexpectedly in 2017, and the foundation created in his name recently donated a segment from one of the first rainbow flags that flew in front of San Francisco City Hall during the 1978 Pride parade to the GLBT Historical Society Museum in the city's Castro district, where it is now on public display.

Tina Valentin Aguirre, the manager of the cultural district, stated in an email that the district has no comment at this time.

The Gilbert Baker Foundation confirmed via email that it is not responsible for paying for or maintaining the current flag at Castro and Market streets above the Castro Muni Station. The flagpole itself was dedicated on November 7, 1997.

Since then the business association for the neighborhood has overseen the use of the flagpole and replacement of the flag each year, normally paid for by proceeds from the Castro Street Fair, normally held the first Sunday in October, and other donations.

In 2000 the leather community successfully petitioned to have the rainbow flag be replaced by the leather flag and flown the week leading up to the annual Folsom Street Fair in September. Eleven years later the merchants group agreed to fly the bear flag over Presidents Day weekend in February to mark the end of the International Bear Rendezvous event after a 17-year run. When local organizers launched a smaller get-together in 2012, Castro Merchants (then the Merchants of Upper Market and Castro) agreed to again fly the bear flag.

The 20-by-30-foot flag has stood at half-staff less than a dozen times over the years to mark the passing of a significant member of the LGBTQ community. Requests to lower it to mark the 10th anniversary of the 9/11 terrorist attacks and to fly the transgender flag led to heated debate over how the flagpole should be regulated and who should control such decisions.

The merchants group tried to address the issue by adopting a policy in 2012 for how community members could make requests to either lower the rainbow flag or fly other commemorative Pride flag designs. But it ultimately decided to no longer replace or alter the oversize rainbow flag and keep it at full staff 365 days a year.

More recently making the flagpole a city landmark has been floated. While the office of gay District 8 Supervisor Rafael Mandelman has told the B.A.R. it's receptive to the idea, no formal request to start the landmarking process has been submitted to city officials.

Updated, 6/24/21: This article has been updated with a comment from the Castro LGBTQ Cultural District and with information on the cultural district board's vote.