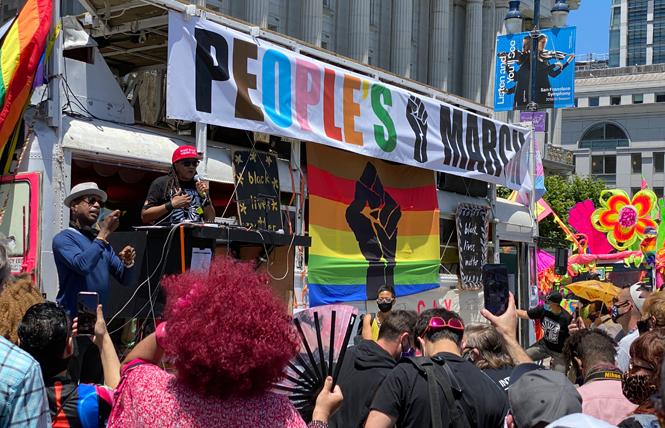 For the second year in a row, there won't be an official Pride parade up Market Street this year. But there is by no means a dearth of activities for revelers and activists alike in San Francisco this weekend to commemorate the annual anniversary of the 1969 Stonewall riots.

The urban global village stage powered by Soul of Pride will be setting up on 18th Street, between Collingwood and Castro streets, Saturday, June 26, at 12:30 p.m., according to Joshua Smith, the co-producer of the stage.

This event is independent of the San Francisco LGBT Pride Celebration Committee, though the stage is usually at the Civic Center celebration that occurred in pre-pandemic times.

The stage will be in front of the GLBT Historical Society Museum, Smith said, and there will be DJs, masters of ceremonies, community speakers, and "a number of community villages and stages from SF Pride" including people from the women's stage and Club Papi.

Smith said that things will wrap up by 6:30 p.m., when that stretch of 18th Street reopens to traffic. He stressed that "this is a Black and Brown-led stage and the global stage has always been about holding space for Black and Brown folks in the Castro who have been 'othered,' which is one of the reasons we've brought this stage on Pride weekend."

This being San Francisco, however, the weekend doesn't come without controversy.

The second annual People's March and Rally has scrapped plans to come to the Castro neighborhood as the Bay Area Reporter originally reported, according to organizer Alex U. Inn, after Inn said people associated with the Castro LGBTQ Cultural District linked the march with people who vandalized the neighborhood last year.

As the B.A.R. reported last June, the inaugural People's March began at Sacramento and Polk Streets (where the first Pride parade in San Francisco, 50 years earlier, also started) and made a stop at Civic Center before heading up Market Street to the Castro.

At the same time, groups of revelers and demonstrators from other parts of the city showed up in the LGBTQ neighborhood. Some individuals, whose identities were in various stages of concealment, graffitied buildings in the neighborhood, such as the Bank of America and the Walgreens at 18th and Castro streets, the adjacent bus stop, the CitiBank on Castro Street between Market and 18th streets, and several storefronts that are now vacant on that same block. The Starbucks on 18th Street between Castro and Hartford streets had two windows smashed.

"The cultural district started using language associating the People's March with the damage of last year, asking if we were going to have safety crews," Inn said in a phone interview. "When the damage happened last year, it had nothing to do with Black, Brown, and Indigenous people, but they treated us like it was us, so I said 'enough.'"

Inn said that the original plan was to occupy the Castro — which, to echo Smith, has long faced concerns about how inclusive it is to people who aren't white, gay, cisgender men — to show the neighborhood the diversity of the LGBTQ community.

"Seldom do you have Black, Brown, and Indigenous bodies in the Castro, and we wanted to take over the Castro once a year so we can be seen, so the merchants can see us, and what we can bring to the Castro," Inn said. "We're just not going to boost the Castro that day."

Inn said that Tina Valentin Aguirre, a genderqueer Latinx person who is the manager of the cultural district, had asked Inn about safety plans.

When reached for comment, Aguirre stated in an email: "The staff and advisory board members of the Castro LGBTQ Cultural District had questions about plans for safety because we want to make sure that residents, businesses, and visitors are safe in the Castro. We celebrate that Pride is a protest and continue to share the values of promoting LGBTQ culture in all its diversity in terms of racial, gender, and queer equity."

Nevertheless, the rest of the People's March will go on as originally intended, beginning at 11 a.m. Sunday, June 27, at Sacramento and Polk streets and making its way down to Civic Center for a noontime rally.

"We will show up in droves with amplified voices to advocate for the George Floyd Justice in Policing Act, denounce and condemn police violence against our communities, and raise awareness for the need to defund police departments, which will allow for funds to be reallocated to social services, mental health care providers, and social justice organizations," a news release states.

"We want to take Pride back to our roots," Inn said. "We don't need our trans and undocumented people to be afraid to come to a Pride event. We want our community well-represented on this day of celebration."

"There's more folks who are going to speak and perform but because they haven't officially confirmed I didn't want to embellish," Inn said. "We have a full lineup of speakers and performers."

Inn wanted to thank the LGBTQ community for their offers to support the People's March.

"I'm so happy to see people are out asking 'can this happen again?'" Inn said. "It's been massive. Our community steps up, and it's such a treasure."

The People's March is raising money to cover costs through GoFundMe. As of press time, the fundraiser has raised $1,165 of a $5,000 goal. 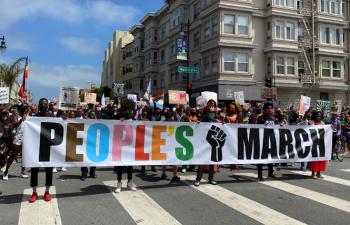 Oakland event
Across the Bay, Black Oakland Pride has a whole weekend of events scheduled, as the B.A.R. reported last week. The group is seeking volunteers.

"Volunteers are needed on June 25, 26, and 27 to help with a pub crawl, queer expos, a kickball tournament, evening parties, and even a Slayers Ball," SF Pride's volunteer team stated in an email it sent on behalf of organizers of the East Bay event. "Please consider volunteering to support the legacy of Blackness and queerness in the Bay Area!"

Castro welcomes visitors after pandemic year
Gay District 8 Supervisor Rafael Mandelman, who represents the Castro on the San Francisco Board of Supervisors, told the B.A.R. that the city is well aware LGBTQs far and wide are itching to flock to the neighborhood this weekend.

"I think the city is trying to be prepared for any and all eventualities," Mandelman said, stressing how rapidly different plans are being bandied about, starting, or being scrapped. "We are trying to set up Porta Potties in the Castro and at [Mission] Dolores Park."

Mandelman said it is his understanding that the San Francisco Dyke March (usually the Saturday of Pride weekend in the late afternoon/early evening) was not scheduled to occur as of the time of the interview, but that a spontaneous march may occur.

The Dyke March did not respond to multiple requests for comment.

As the B.A.R. previously reported, the Trans March is set for Friday, June 25 (without a planned in-person march), with both online programming and in-person events, including a brunch at 10 a.m. at 726 Jones Street presented by Openhouse, Lavender Youth Recreation and Information Center, the San Francisco AIDS Foundation, and the San Francisco Community Health Center, and a resource fair from 11 a.m. to 4 p.m. on Dolores Street between 18th and 19th streets, according to the Trans March Facebook page. It will return as a march in 2022.

Tom Temprano, a gay man and aide to Mandelman, said June 21 that it is expected "that even if there isn't a formal trans march, [a spontaneous physical march from the resource fair] is possible, if not likely."

Trans March organizers did not respond to a request for comment regarding this possibility.

Rachel Moran, the captain of the San Francisco Police Department's Mission Station, told the B.A.R. June 21 that the department plans to "beef up patrols in the Castro and Dolores Park" this weekend and "definitely increase staffing."

Nik Blanchet, the community liaison for the Castro Merchants Association, stated to the B.A.R. in a June 22 email that the group is glad for the economic support its members are receiving as they try to recover from the downturn in business due to the COVID-19 pandemic lockdowns and restrictions. The state, of course, and many Castro businesses fully reopened June 15.

"Castro Merchants shares in and welcomes Pride and is looking forward to a full recovery from the pandemic," Blanchet stated. "We appreciate support from LGBTQ+ and allied communities for our small, mom-and-mom-style businesses during the celebratory and politically relevant Pride season."

The bars and nightclubs in particular, more impacted than many other businesses, are glad to be back.

Chris Hastings, the owner of the Lookout at the intersection of Noe and Market streets, stated in an email to the B.A.R. that "the energy has been fantastic" since June 15.

"It's been really wonderful to see all of our regulars again and to have people back inside Lookout," Hastings stated June 21. "People are ready to be out and see their friends. Everyone has been in such a good mood since Tuesday's re-opening. ... We are expecting a very busy Pride weekend and welcome being able to celebrate with everyone."

Hastings wants people in the nightlife industry to be aware of the Pride Recovery party, which starts at 2 p.m. June 28.

"The one thing I'd like to call out specifically over the weekend is our Pride Recovery Party, that we throw on Monday afternoon," Hastings stated. "It caters to the industry people who worked all weekend to make Pride happen, the DJ's, performers, promoters, and hospitality/nightlife employees. ... Phil B will be DJing and Pollo Del Mar will be hosting. There is no cover charge for this event."

Promoters are capitalizing on the loosening of restrictions with the first large dance parties since the beginning of the COVID-19 pandemic last year.

Cecil Russell, a gay man who is the head of Cecil Russell Presents and Gloss magazine, told the B.A.R. June 21 that he has four dance parties scheduled at the Great Northern in Potrero Hill, 620 Jones downtown, and 316 11th Street South of Market.

Russell said that these were planned with fingers crossed.

"The deal with the venues was that everyone would be vaccinated and we'd get the mayor's clearance," Russell said. "So, there was a chance it wouldn't happen, but we got the vaccines out quickly enough and are close to herd immunity here [in San Francisco]."

Russell added he is pleased he can sell tickets up to 100% capacity; there'd been concerns that perhaps dance venues would have to be open with fewer attendees, until the city laid those to rest early this month.

"San Francisco has done so well," Russell said. "It feels great. Everyone needed this — to come together, to have fun, and then return to normal. We all did our part."

Longtime San Francisco DJ Steve Fabus said he will be spinning at the Monarch nightclub South of Market for a Pride party Saturday night. He, too, was initially uncertain what kind of festivities would be allowed by the end of June.

"It just so happened that by Pride we actually have our nightlife back," Fabus told the B.A.R. June 21. "Even though we were thinking it could happen that way, at first it was like 'is this happening?'"

Fabus said that "at this point it's about as 'back to normal' as you can get."

"Almost all the promoters in the scene are producing parties for Pride," he said. "A lot of us in the gay community felt we've done a pretty good job with masking and following the rules for over a year. We don't have a parade, but we're going to have a great Pride."