by Matt Haney and Rafael Mandelman 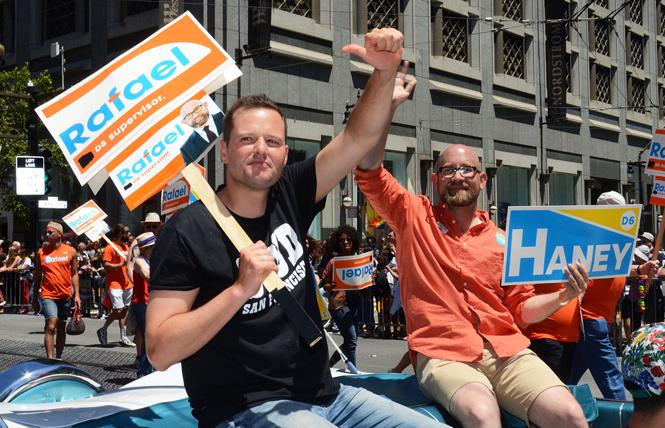 This Pride week the San Francisco Board of Supervisors has been busy finalizing our city's budget with big investments in our LGBTQ+ community.

A budget is a statement of values, and coming out of the pandemic, San Francisco has a responsibility to use our budget to lift up the most vulnerable and support an equity-first recovery in San Francisco.

The queer community has been disproportionately impacted by COVID-19. LGBTQ+ people have been shown to be at greater risk of developing health complications from COVID-19 infection. LGBTQ+ people are also reporting that the pandemic has had a negative impact on their mental health at significantly higher rates than their non-LGBTQ+ peers.

Many of the city's most cherished LGBTQ+ small businesses, nightlife venues, and institutions have found themselves in deep debt or on the brink of closure. LGBTQ+ workers are more likely to have experienced loss of income due to the pandemic, as they are more likely to work in highly impacted industries such as the service industry, retail, and K-12 education.

Even before the pandemic, LGBTQ+ people experienced significant disparities, which were exacerbated over the last year. LGBTQ+ Americans are more likely to live in poverty than their straight and cisgender counterparts, with Black and Latinx transgender adults being the most heavily affected. LGBTQ+ youth are 120% more likely to experience homelessness, and here in San Francisco, fully half of the unhoused youth who live in our city identify as LGBTQ+.

In this year's budget, we have the opportunity to invest in supporting the recovery of our LGBTQ+ residents and small businesses, closing these disparities and making San Francisco a more equitable place for queer and trans people.

For that reason, we are hugely supportive of the historic investments in the LGBTQ+ community proposed by Mayor London Breed in her budget, including the world's first basic income pilot for trans people, housing subsidies for trans and HIV-positive San Franciscans and $12 million for the acquisition of a home for the country's first LGBTQ+ museum. The proposed budget also enhances funding for arts and culture, leadership development, on-site school initiatives for queer youth, and new services for LGBTQ+ seniors experiencing mental health and isolation issues during the pandemic. We thank Mayor Breed for her leadership on these critical efforts, and we will continue to champion these investments through the budget process.

Even with these much needed investments, there are still further unmet and urgent needs for the LGBTQ+ community. As the budget chair and the sole LGBTQ+ member of the Board of Supervisors, respectively, we are committed to deepening this investment by an additional $2 million: $750,000 in culturally competent health care services for queer and trans folks; $500,000 in expanding rental subsidies for the trans community; $250,000 in new trans-focused economic development and recovery initiatives; $250,000 to increase access to mental health services for long-term survivors of HIV; $150,000 in support for LGBTQ+ community building through arts and culture; and $100,000 in capacity building efforts to establish a new world class LGBTQ museum.

We are excited to make these additions to San Francisco's budget toward LGBTQ+ housing, healthcare, mental health services, economic development, and arts and culture with the hope that we may be able to build on these commitments as the city's budget process plays out. Approving a city budget with such bold and robust investments in the LGBTQ+ community is a proud moment for all of us.

Guest Opinion: Queer, disabled, and running for office
Sign up!