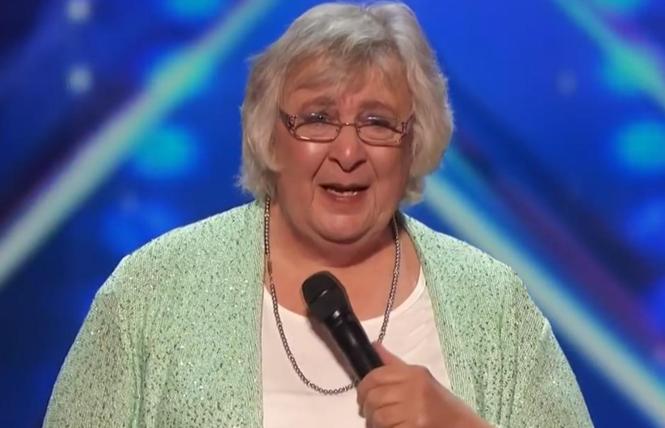 Caleb Hearon, Shelby Wolstein, and Julia Scotti have a lot in common. All are pursuing careers in comedy and all are out. Hearon, a gay man, and Wolstein, a queer woman, are the co-hosts of "Keeping Records," a lighthearted podcast in which they ask their guests what they would send into space to paint a portrait of humanity and the world.

Scotti is a transgender woman who's an acclaimed stand-up comic. She transitioned in middle age, made a splash on "America's Got Talent," and is the subject of "Julia Scotti: Funny That Way," a 2020 documentary about her transition and her life.

The Bay Area Reporter spoke to all three about their work, how they find humor amid the COVID-19 pandemic, and what Pride means to them.

"Funny That Way" is an entertaining film in which Scotti talks about her life-altering transition, her comedy, her relationship with her children and with her ex-wives, and her more recent quadruple bypass surgery. For many years she was known and performed as Rick Scotti, taking a break from comedy to undergo her transition. Unlike many transgender people, Scotti is very open about her pre-transition name and identity, and in fact, the film includes footage of her performing in her male persona.

"I get that," she said of other trans people who prefer not to reveal who they were in their previous lives. "I get that they don't want to do that, I totally, totally get that, but, having said that, I'm in a very public job, so there's really no way that I can hide who I was. You don't have to dig too deep in the Google machine to find out who I was before. So I felt, what's the point in hiding it, it made me who I am today, and the person I am today I kind of like."

Scotti, who's in her early 60s, gave high marks to director Susan Sandler.

"It's hard to be objective," Scotti said of the film. "But I think Sandler did a wonderful, wonderful job. It's scary to put your life in someone's hands like that, there's a lot of trust involved that they're not going to screw it up. She's a very talented writer, she's a professor, she teaches screenwriting, so she has a real good sense of the narrative of film." (Sandler is a professor at New York University's Tisch School of the Arts.)

Scotti doesn't know if her ex-wives have seen the film, as she doesn't talk to them. She's not sure if her children have seen it, though her kids are in the film. Scotti was estranged from her children for many years after her transition, but they have since reconciled with her. It was a reconciliation that touched her deeply.

"I never thought it would happen," she said. "They grew up, and they got out in the world a little bit, and they saw that not everyone's the same. I give them so much credit for being the mature, wonderful human beings that they are."

At one point during the pandemic, with all her gigs canceled, she found herself doing deliveries for DoorDash just to make a little money. Now that things are reopening, she's getting work again, and she's also teaching a comedy class online.

"I spoke to a number of colleagues," she said. "We all said the same thing, our brains got petrified. We need that constant stimulus, we couldn't write about stuff. I wrote a play, I just took the time and wrote a play. It's only now that I'm starting to write material again now that I'm out in civilization."

Her play is about an Italian American family and their gay daughter in New Jersey in 1969. She said that she was very happy with the play and is now looking to get it produced.

Scotti recalled that after her 2016 appearance on "America's Got Talent," she was "bombarded" with positive messages from within the trans community, many of whom were very happy to see someone like themselves on TV. Though her being out is a political statement of sorts, Scotti prefers not to get too political, though she did briefly address the deluge of anti-trans laws now being introduced and passed by conservative lawmakers in states across the country.

She often performs at Pride festivals, and noted that Pride means a great deal to her.

"I love seeing the celebrations," she said. "I love the assertion that we're here, and more and more people accepting us and just letting us be. I love it all. I haven't been to a Pride Month in San Francisco, but I sure would like to. It would be a wonderful place to go." 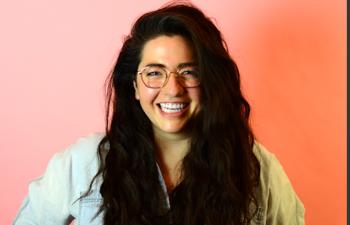 The podcast life
"Keeping Records," the podcast co-hosted by Hearon and Wolstein, is also an entertaining work. The two are best friends and roommates, and often finish each other's sentences. Their personas are lighthearted and upbeat as they kibbitz with each other like morning drive-time radio hosts — albeit with four letter words! They met in Chicago where they were both doing comedy. They are now in Los Angeles.

"We are both queer, but if we could be straight for each other, God, we would do it," said Hearon.

"In a heartbeat," added Wolstein.

Hearon, 26, added that he prefers the word gay in reference to himself, but that Wolstein, 27, goes by queer.

"I have to say queer or it gets confusing," she said, "because I'll date anyone."

It was important to them that the podcast they started be an idea, and not just the two of them talking about whatever came up. Then Hearon had a phone conversation with a friend in North Carolina who was reading about the Golden Record, which were recordings that space agency NASA sent on Voyager in 1977 as a record and portrait of life on Earth.

"I thought it was ridiculous, I had never heard of it before," said Hearon.

"And I had never heard of it either, which is surprising, because my sister is big into space," added Wolstein.

And so they came up with the idea of asking guests about what they think are the most important things in culture and on earth. So far they've done 27 episodes.

"Some guests send 20 things, some send three, we aim for at least five," said Hearon. "Then we just get into it with them and talk about why they love this music."

"Or why they would include it," said Wolstein, "because sometimes it's not that they love it. The person who put on Disney was putting it on because she thinks it says a lot about humanity."

They also talk about what Hearon called "cool things," like sex and drugs. Wolstein noted that they get many private messages through their Instagram and Twitter accounts, and that they do engage with listeners. 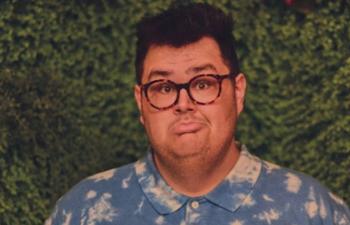 "Unless we do make contact with aliens and then we'll have to stop the pod," quipped Wolstein.

Like everyone, Hearon and Wolstein had to deal with the pandemic. The pair had a busy year in spite of COVID, moving as they did from Chicago to Los Angeles, then moving within Los Angeles.

"We're sort of like exploring a new city in a post-apocalyptic way," said Wolstein. "Now we're getting to see it in its more normal way, but for awhile it was driving the 101 and you're the only car there, which is just like really disorienting, and there's humor in that. There's humor in sitting at home with one person for six months. There's humor in all of it, there's obviously the tragedy of it all."

Hearon pointed out that there's always something happening to make doing comedy difficult.

"And you just choose to do it anyway," he said. "And that's what we did during the pandemic."

Both are now fully vaccinated. Both spoke a bit about Pride Month.

"I'm a late life queer," said Wolstein. "I came out when I already had an entire queer group of friends, and I've been very, very fortunate."

"You let the rest of us do the work," said Hearon as they both laughed. Hearon added that he thinks Pride should be a political protest against racism, transphobia, and the police.

"When I think about Pride I often think about it as a juxtaposition," said Hearon. "I grew up in rural Missouri in the closet and I didn't know a single out gay adult at all, period. So when I think about that part of my life, and this part of my life, where all of my friends are queer to some extent, so Pride to me is the ability to have a community where you feel like you are just truly able to be yourself.

"It doesn't even feel like a question anymore, when I was growing up I never imagined that I would get to live like that," he added. "And now I'm shocked if I ever have to explain something about my sexuality because it feels so understood, and that to me is very much the feeling of Pride."