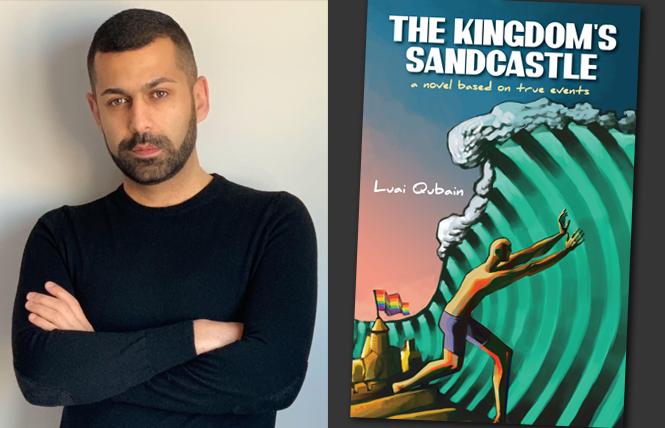 Sitting in the Denver home that he shares with his husband, gay first-time novelist Luai Qubain is free, living his dream, and heading into his future. His freedom was not without a price, however, and it was painfully hard won.

The 35-year-old former oil and gas engineer's pain and struggle for his liberty is detailed in his first English-language autobiographical novel, "The Kingdom Sandcastle," which was published in April.

Qubain's life in Jordan was made for fiction, he said, stating that 95% of the book was drawn directly from his life. There was no need to make up dramatic plots, betrayals, or Earth-shattering discoveries; the story was already embedded in his own experience.

His life was so unbelievable that when friends and people heard his story, they encouraged him to tell it.

"Everyone I told the story to was super-amazed by everything," Qubain said during a Zoom interview with the Bay Area Reporter.

He said that it was painful sitting down to write his story; it took effort to unlock the memories he put away deep within his mind, he said, and to put to words to his experience.

For 13 years, he denied seeking help for himself after a therapist in Jordan betrayed him by disclosing conversations from his therapy sessions to his aunt.

A suicide attempt landed him in the emergency room and back in a therapist's office.

Qubain said that he now has the tools he needs to manage his anxiety, depression, and bipolar and post-traumatic stress disorders. It didn't make excavating his memories for the book any easier, he said.

His PTSD flared up and he ended up developing an eating disorder after he finished writing the book, he said.

The book
Qubain draws readers directly into his story through fast-paced dialogue and without elucidating long drawn-out descriptions.

"I want[ed] to write the book in a way where if I was sitting in front of you and talking to you," Qubain said. "I want to leave room for the reader's imagination to do some work."

He purposefully wanted to provide "just enough details" to "build an image" in the reader's mind," he explained.

People's names in the book were changed to protect their privacy. The end was fictionalized, he said.

The novel has already received acclaim, and Qubain has been fielding messages from LGBTQ people around the world thanking him for sharing his story, he said.

"I wanted to inspire other people who are still in societies that just do not accept them for who they are," said Qubain. "I want them to know that there is a better way for them in the world. They have to fight for it, but it is possible to get there."

His story
Qubain grew up Catholic in Amman, the capital of Jordan. In 2004, he got his first taste of freedom in the United States at UC Santa Barbara. But two months later his father, due to false rumors spread by family members, quickly snatched that away from him.

"My dad made me [return to Jordan]," Qubain said, recalling the phone conversation a world away. "He said, 'If you're going to be in the U.S. I am not supporting you.'

"I'm like OK, I have never worked in my whole life before, so I have no choice but to go back home," he said, explaining he was unaware of financial aid options that could have helped him stay in the U.S. at the time.

Qubain returned to Jordan, where it is legal to be gay but socially taboo.

Middle Eastern people "look at you as if you are not human if you're gay," he said.

"You are a sin that's walking around," he continued, and that sin, "needs to be cleansed by either committing an honor crime, being sent to conversion therapy, [being disowned], ... or something else.

Qubain said there are many LGBTQs in the region. "The LGBTQ community in the Middle East is huge," he said. "Everybody's closeted."

He talked about how men hook up through masked profiles on dating apps, which makes them easy targets for entrapment by anti-gay men and police where they can be blackmailed, assaulted, or both.

Fear ruled his life, holding him prisoner in an unhealthy relationship and family environment. His former lover raped him daily for 18 months, he told the B.A.R.

"I couldn't do anything about it," said Qubain. "I knew if I told my family, A) I would be coming out, then B) I'm a rape victim. What's going to happen? A plus B equals I'm going to get either killed, disowned, or something else."

This is one of the many reasons why Qubain does not blame LGBTQ people in the Middle East and the diaspora for not coming out. He knows they will be disowned, tortured in conversion therapy, or become victims in honor killings. He also understands their financial and social dependency on their families.

It does not matter where in the world they live. The familial bond is strong and any good or bad news about a family member travels fast in gossipy family circles, he said.

For three years after returning to Jordan, he savored the freedom that California and the U.S. left in his memory. It helped him through his mother's death and his own ordeals before he returned to the states permanently.

"I've always wanted to become an American," said Qubain, who became a citizen in 2015.

"I love Jordan as a country," he said, reminiscing about the food, especially his grandmother's cooking; the summer nights; and the Dead Sea and Petra, two of the country's famous sites.

"Jordan is so rich in history and culture, I just wish it was a gay-friendly place," he said.

Life or death
Qubain finally came to a breaking point.

"There was no other way than literally killing myself to relieve myself from this torture or start over again from somewhere far away where [his former lover] could not reach me," Qubain said.

"I promised my mom the last time I hugged her ... I'm always going to be great. I'm going to do good in life. As long as I'm alive, you are going to be living through me," he said, "So, suicide was not an option."

Qubain chose to go far away. In 2007, he got on a plane to Oklahoma City to meet a man, named Adam in the book, whom he met through a close friend.

"He literally saved my life," said Qubain, who boarded the plane in Jordan and did not look back.

Qubain and his husband, Misha Belfer, a hairdresser, are still friends with Adam today, he said. Qubain and Belfer started dating in 2014 and married in 2017.

The freedom to be "yourself in public and to express yourself without worrying [about being] rejected, discriminated against, or even being killed ... that's a huge thing," he said.

He also expressed the importance of U.S. embassies raising the rainbow flag during Pride Month. The State Department approved that earlier this year, scrapping a Trump-era policy of not flying Pride flags at U.S. missions.

"Can you imagine Islamic countries seeing that big, huge rainbow flag ... that makes a statement. That tells the world that the U.S. is going to protect LGBTQ [rights]," he added. "The administration is going to work hard to make these rights available not just for Americans but everyone in the world."

Qubain, who is working on his second novel, a sequel, hopes that readers will walk away from his first book sensing, "Don't take your freedom for granted. It's very special."