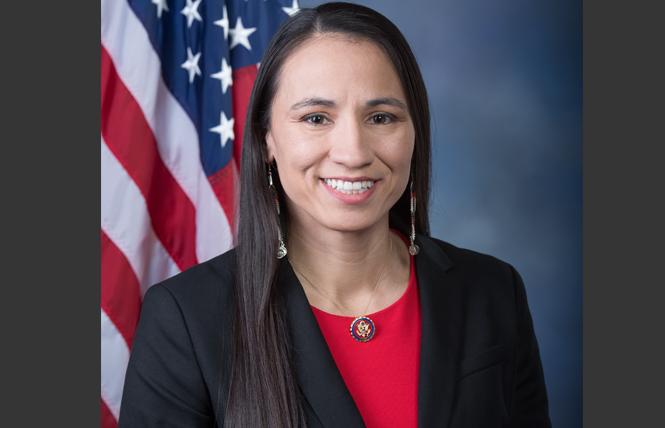 Congresswoman Sharice Davids (D-Kansas) made history in 2018 by becoming the first out member from Kansas and one of the first two Native American women elected to Congress. The lesbian lawmaker flipped her 3rd Congressional District blue, helping Democrats retake control of the House.

Her shattering of the dual political glass ceilings has drawn national attention to Davids both in Democratic circles and the LGBTQ community. And over her two and half years serving in the House, Davids has won praise from her Democratic colleagues.

"She's worked tirelessly to make health care more affordable and accessible, and curb the influence of special interests in Washington. (Oh, and she's one of the best hitters we've got on the Congressional Women's Softball Team)," gushed Senator Kirsten Gillibrand (D-New York) in an emailed invite for her Pride Month Celebration and fundraiser earlier this month that featured Davids and Congressman Mondaire Jones (D-New York), the first openly gay, Black member of Congress.

The LGBTQ Victory Fund recently named Davids one of its Game Changer Incumbent Candidate endorsees for next year. Ahead of her seeking reelection to a third term during the 2022 midterm elections, Davids, 41, has now turned her life story into a children's book titled "Sharice's Big Voice: A Native Kid Becomes a Congresswoman" (HarperCollins, $17.99).

Published June 1 with illustrations by Joshua Mangeshig Pawis-Steckley, an Ojibwe woodland artist and member of Wasauksing, First Nation, the book includes a history of the Ho-Chunk Nation, to which Davids' family belongs as part of its warrior clan, written by former Ho-Chunk president Jon Greendeer. There is also a personal note from Davids, who worked with author Nancy K. Mays, an adjunct professor of journalism at the University of Kansas, to write the book. In it Davids conveys how important it is to make choices in life that are "true to your own journey."

The Political Notebook spoke to the lawmaker and lawyer via Zoom in late May about her book and the current landscape for LGBTQ rights across the country. In February, Davids was part of the bipartisan 224-206 vote in the House that passed the Equality Act, which would amend the 1964 Civil Rights Act to extend protections to include sexual orientation and gender identity.

Despite pleas from President Joe Biden for congressional leaders to send him the bill to sign within his first 100 days in office, the legislation remains stuck in the U.S. Senate. Most political observers believe it is unlikely to be passed since Democrats are well short of the 60 votes they need to overcome a Republican filibuster of the bill.

Asked about the impasse, and a recent headline in the Washington Blade LGBTQ newspaper that said the Equality Act is basically dead this year, Davids expressed optimism that a path to passage could still be found for the bill.

"One of the things I would say is I am an optimistic person. I wouldn't have run for Congress if I weren't," said Davids. "I don't walk around with rose-colored glasses on; I feel I try to be realistic with my optimism."

What is keeping her hopeful about the Equality Act, she explained, is the support it attracted from three of her Republican colleagues in the House and the continued focus on the need to enact the legislation by community groups.

"We know folks said the negotiations continue. I think now that we have majorities in both the House and Senate, I think, I think we should keep our minds open about what is possible," she said. "I think there is certainly room for bipartisanship on this bill. The fact we have seen it in the House, to me, is something to make my optimism feel more realistic." 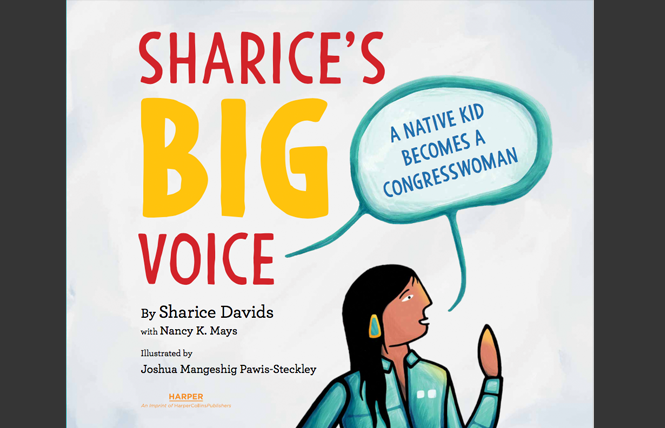 A theme of possibility imbues her autobiographical illustrated book that takes readers on a journey through her childhood, moving across continents due to her mother's Army career, becoming a martial arts fighter, graduating law school, and being elected to Congress. Davids had nothing but praise for how Pawis-Steckley illustrated her in the book, saying her biggest concern was how he depicted her mother.

"The only thing I will say is the first time I saw any of the illustrations he sent over, I loved them immediately. It wasn't, 'Oh, can you change me this way or that?' The only thing was I wanted to make sure we had a good reflection of my mom," said Davids. "And the way we did that was we just sent him pictures of when I was a kid with my mom and we sent some images from my election night so he had something to work off of."

While the book includes references to her being lesbian, there is no panel about her coming out of the closet. The omission was purposeful since Davids didn't have a traumatic coming out story to tell due to her mother's acceptance of her sexual orientation.

"I never felt like I was at risk or in danger of having my mom treat me differently or not accept me because I am a lesbian," said Davids. "I know a lot of people don't have that experience, and I didn't ... I feel like I want this book to be as authentic as possible and also I could only include so many stories."

Outside of the context of her book, Davids said she has prioritized mental health and behavioral health access and trauma care on Capitol Hill largely due to the high rates of suicidal ideation among LGBTQ youth and Native American children, as both groups of young people continue to face stigma and discrimination. This year alone state legislatures have passed numerous bills attacking the rights of LGBTQ youth, she noted.

If anything comes from her publishing her book, Davids said she hopes it is that an LGBTQ or Native American child feels a sense of visibility and/or validation from reading about her own experiences growing up.

"In big and small ways we can help our young people see that their experience is valid, that their voices deserve to be heard, that they deserve to be seen and feel seen," she said. "Hopefully that's at least maybe a little part of what people take away from this book."

Until fairly recently there weren't any children's books featuring the Ho Chunk Nation; Davids couldn't recall seeing or reading any when she was a child. Only recently did she learn that 1% of books for kids have any Native American representation, a fact she found to be "pretty staggering."

"It makes me maybe realize that's probably part of why I don't ... why, one, I didn't see them because they didn't exist to a large extent when I was a kid. It was staggering to me in a way," said Davids. "My hope is that when people see this book, they will be able to see — I don't know if I want to use the word representative, I usually say reflective — I think a lot of us, probably all of us, know what it is like to feel invisible, or not seen or not heard."

During her childhood Davids said she "definitely felt" unseen at different points.

"Some of it might be when you don't see stories that either aren't reflective or are not accurate, that sort of thing, that can add to that feeling of invisibility and not being heard," she said. "I think that my experience is actually not an uncommon experience."

Thus, Davids said she is especially proud of being able to include the special section about the Ho-Chunk Nation in her book. Few people know of its history or much about its culture and how it differs from other Native American tribes.

"I feel like there is a lot of, we will call it misunderstanding or misconception maybe about tribes and tribal history and that sort of thing," she said. "Tribes across the U.S. are very diverse in experience and traditions and culture. I think it is important for folks to recognize that each tribe has its own history and language."

Stressing that her book shouldn't be seen as a "how-to guide" for seeking a seat in Congress, Davids said it is meant to illustrate that each person has their own path to walk in life and will be confronted along the way with countless choices to make. And as she points out in the book, it is those choices that will change one's life.

"The book really highlights every single one of our journeys is different," said Davids.