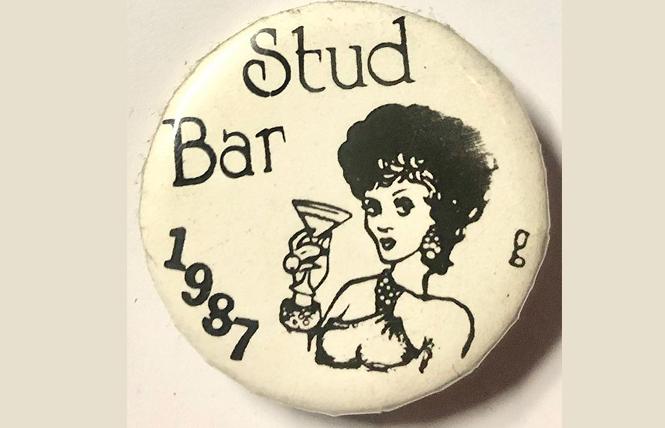 One of the many pins from the Stud Archive celebrates 1987. Photo: Courtesy HSAC

The Haight Street Art Center is now showing "Queer Visions," an exhibition that brings together LGBTQ+ artists and institutions to explore the role of nightlife in the creation of the queer community in San Francisco.

Anchored by a display of pinbacks from the Stud Archive, the exhibition looks at iconic taverns and gathering places in the city that have provided haven and joy for the queer community since the 1960s, a news release stated. The exhibit also includes work by young queer artists considering the role of their queer families and role models in their sense of self.

Harris stated that the exhibition showcases celebration, organizing, and social change through time.

The Stud Collective added that it's happy to participate in the exhibit.

"The Stud bar opened on Folsom Street in 1966, and survived a move to Harrison Street in 1987. While we were forced to close that location due to COVID, the Stud Collective is actively looking for a new space and hopes to reopen by the end of the year," the collective stated.

The exhibition runs through August 15, and is free to all visitors at 215 Haight Street (near Muni line 7). It will be open from noon to 8 p.m. Thursdays and noon to 6 p.m. Fridays through Sundays. COVID protocols will still be followed, including mandatory masking and regulated entry. The center and outdoor garden is fully wheelchair accessible by ramp.

For more information, go to https://haightstreetart.org/

In the weeklies category for circulation of 11,001 to 25,000, Bajko took second place in COVID-19 reporting for his article on LGBTQs living with disabilities. He took third place in the coverage of local government category for his article last year about cities in Contra Costa and San Mateo counties flying the Pride flag.

Two of Bajko's Political Notebook columns were recognized. He received fourth place for his column on Sacramento losing gay elected leaders, and fifth place for a column about then-Assembly candidate Alex Lee, who went on to win and become the first out bisexual Assemblyman in the Legislature.

"I'm proud of Matthew for being recognized in achieving four awards," said B.A.R. publisher Michael Yamashita, who's also on the CNPA board (but did not vote in the contest). "He's an asset to the Bay Area Reporter and the LGBTQ community, so it's nice to see his work being recognized. And I'm grateful that CNPA is recognizing the unique work of LGBTQ journalists."

People should meet at noon at Market and Castro streets near the rainbow flag. From there, participants will march to Baird's Castro home and wave signs and banners to let him know his work is recognized and meaningful. The event is supposed to be a surprise for Baird, organizers stated in a news release.

Baird, 89, is a straight ally who was a Teamster leader when he worked with the late gay supervisor Harvey Milk to lead the Coors boycott that began an era of collaboration between the organized labor and the LGBTQ communities.

It began in 1977 in part as a response to the Coors company's 178-question employment application form, as Nancy Wohlforth explained in 2017 on the International Brotherhood of Teamsters' website.

"Baird, then-president of Teamsters Local 921, along with local organizers like the late Howard Wallace, an openly gay Teamster truck driver, understood the power of the LGBT community in the Bay Area," the Teamsters site states. "Organizers approached a gay distributor who in turn approached colleagues and political activists" such as Milk.

The result was a gay bar beer boycott of Coors organized by a new labor-LGBT alliance, the website noted. And it worked, said Wohlforth: "The gay bartenders marched out with the bottles of beer and dumped them in the sewers. Coors was anti-gay, and racist and anti-Latino. And to this day, you can't find Coors in a gay bar in San Francisco."

Milk, of course, was assassinated November 27, 1978, 11 months into his term, by disgruntled ex-supervisor Dan White.

In a recent phone call with the B.A.R. to talk about the paper's 50th anniversary, Baird fondly recalled the time when then-publisher Bob Ross let him run an ad in the paper on the boycott and only charged him $5. (Milk was a onetime political columnist for the paper.)

"Harvey had me go meet with Bob Ross one day," Baird said, adding that he gave Ross a leaflet about the boycott.

Gay activist Cleve Jones, a confidant to Milk and a longtime labor organizer who's now with UNITE HERE, is organizing the event. People are encouraged to bring union banners and signs.

In an email sent to supporters, Jeff Cotter, a gay man who founded and leads the all-volunteer organization, said that the agency's rainbow bus will be parked in the Castro on Sunday, June 27, from 10 a.m. to 6 p.m. The bus has a lounge interior and will be open for visitors. RWF will be raising funds for the many programs it supports that help LGBTQ refugees.

Volunteers are needed to be hosts in the lounge and at RWF's information table. Shifts run from 90-minutes to two hours. To sign up, send a message via the group's contact page.

LGBTQ group gets gift from philanthropist
Funders for LGBTQ Issues, a national organization based in New York City, announced that it is among the many groups that received grants from MacKenzie Scott in her recent round of awards. Scott, the ex-wife of Amazon founder Jeff Bezos, has given away hundreds of millions of dollars to nonprofits.

Funders for LGBTQ Issues stated on its website that it received $3 million and was one of 286 high-impact organizations that received grants.

The gift, the agency stated, "will have a profound impact on our ability to increase the scale and impact of philanthropic resources aimed at enhancing the well-being of lesbian, gay, bisexual, transgender, and queer communities, promote equity, and advance racial, economic, and gender justice."

"This award serves as a powerful validation of the relevance of the mission and work of Funders for LGBTQ Issues, and the persistent need for increased philanthropic investment in LGBTQ communities," stated Rebecca Wisotsky, national director of philanthropic outreach at the organization. "It comes with a clear mandate to bring bold approaches to the way we invite philanthropy to be more accountable to the LGBTQ community over the next decade."

Funders for LGBTQ Issues is a network of more than 85 foundations, corporations, and funding institutions working to increase the scale and impact of philanthropic resources aimed at the LGBTQ communities. For more information visit its website.

Updated, 7/2/21 The Haight Street Art Center item has been corrected; the Stud moved to Ninth and Harrison streets in 1987.