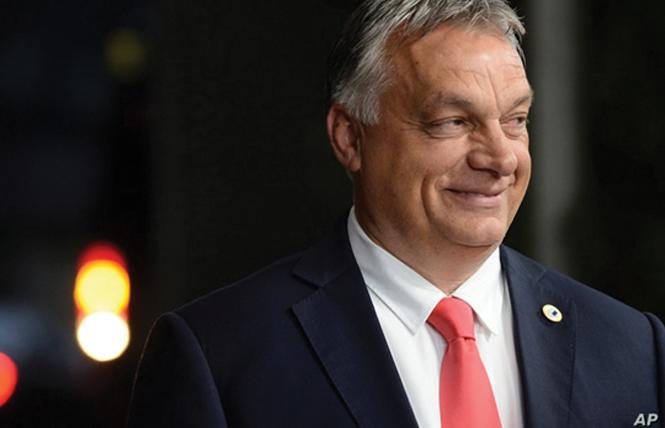 The bill would ban showing educational materials, advertising, and other "promotion" of same-sex relationships, and/or gender identity to anyone under 18 years of age. It prohibits pornographic material.

LGBTQ and human rights advocates immediately condemned the bill, calling it a tool that will create more discrimination and further stigmatize LGBTQ people in an already hostile environment. They called for the bill's withdrawal before parliament's vote.

Luca Dudits, an executive board member with the Háttér Society, a Budapest-based LGBTQ rights group, was worried about the outcome of the bill.

Dudits told the Associated Press there is no similar law anywhere in the European Union "that is so hostile" to LGBTQ people.

Foundation for Rainbow Families representative Marton Pal and his same-sex partner were shocked by the new bill and angered by it last week. The couple has adopted children.

"Yesterday was a hard day. We went to sleep with a lot of anger," Pal told Hungarian TV channel RTL. "When we read these amendments to the law, we gasped for air at what is happening around us, and why there is this stigma. We are trying to process what opportunity this law creates for power."

Human Rights Watch called for the bill's rejection, citing its "sweeping consequences for health providers, educators, and artists, among others," according to a June 11 statement from the organization. HRW associate LGBT rights director Neela Ghoshal called the Fidesz party's reasoning for the bill as "cynically deployed."

She said the efforts to "scapegoat" and trample on LGBTQ rights in the name of children's rights are "part of a wider strategy to sidestep human rights obligations and cement Orban's brand of authoritarianism."

"Children do not need to be protected from exposure to diversity," Ghoshal, who identifies as a queer pansexual, stated. "On the contrary, LGBT children and families need protection from discrimination and violence."

"True liberalism is when children are left alone with questions about their sexual orientation until the age of 18," Selmeczi, who was among the team that introduced the legislation, told AP.

Orban and the Fidesz party, which promotes a strongly Christian-conservative agenda, have ramped up their attacks against the LGBTQ community ahead of Hungary's 2022 elections.

Orban has won three consecutive landslide elections since 2010. However, Reuters reported that for the first time, opposition parties have caught up with the leading party in opinion polls.

Study finds Gen Z the most gender fluid generation
Generation Z is the most sexuality- and gender-fluid generation, according to a new global survey. The generation is broadly defined as people born between 1997 and 2015.

Ipsos' LGBT+ Pride 2021 Global Survey found 1 in 5 young adults identify as non-heterosexual and non-cisgendered and 4% identify as gender-nonconforming. More than 19,000 individuals aged 18 to 74 from 27 countries around the world participated in the global survey conducted on Ipsos' Global Advisor online platform April 23 to May 7.

"The patterns that we see in the U.S. are definitely not unique to the U.S.," Boyon told NBC News, referring to other studies that similarly observed the higher rate of gender and sexual fluidity among Gen Z. "It's a global phenomenon."

Ipsos' findings echo results from other surveys, including a 2020 Gallup poll that discovered 5.6% of U.S. respondents overall identified as LGBTQ, while 16% of Gen Z reported identifying as LGBTQ, reported NBC News. (The Gallup poll was released in February.)

Published June 9, Ipsos' results discovered sexual orientation and gender fluidity is increasing from one generation to the next, with 87% of baby boomers identifying as heterosexual compared to 84% of Gen Xers, 78% of millennials, and 68% of Gen Z. The biggest increases in sexual orientation were among gay- and lesbian-identified individuals that gradually increased by 1% with each generation, from 1% of baby boomers to 4% of Gen Z. People identifying as bisexual increased dramatically from baby boomers (2%) to Gen Z (9%).

For gender-nonconforming individuals, 4% of Gen Z identify as "transgender, nonbinary, nonconforming, gender-fluid, or other than male or female" compared to 1% among all adults, according to the survey. The survey also found that exposure to and engagement with LGBTQ people varied around the world. For example, 66% in Brazil report having a gay or lesbian relative, friend or colleague versus 7% in Japan and South Korea, according to the report.

Acceptance of LGBTQ people's visibility varied from public displays of affection (37% support versus 27% opposition) to LGBTQ characters in media (35% support versus 25% opposition) the survey found. A majority of people around the world support LGBTQ rights from anti-discrimination laws to marriage equality, with a few countries that are in hardline opposition.

The survey found that 72% say same-sex couples should be allowed to marry or to obtain some legal recognition, while 15% oppose any legal recognition. The same percentage agree that same-sex couples should have the same rights to adopt children as heterosexual couples do as opposed to 22% who disagree. A high percentage of respondents (60%) support laws banning discrimination against LGBTQ people when it comes to employment, access to education, housing and social services, while 21% oppose them.

ORAM is hosting its annual #RefugeePride to support its work in Kenya and at the Mexico-U.S. border Thursday, June 17, at 5 p.m. Pacific Time on Facebook Live and YouTube.

LGBTIQ asylum seekers and refugees will also tell their stories, and ORAM's team will talk about the work the organization is doing to support LGBTQI refugees and asylum seekers during the global pandemic.

On June 20, at 10 a.m. Pacific Time, RDJ Refugee Shelter will host another opportunity to celebrate and support LGBTQ asylum seekers.

Rainbow Railroad client Amin, who survived the purge in Chechnya and is only identified by their first name in the announcement, will tell their story, along with a host of other refugees and asylum seekers.

Immigration Equality paralegal and legal assistant Ricardo Medina will speak about their clients' experiences and the organization's work. The event includes a performance by violin-viola ensemble Duo Cenoria.

The event is being sponsored by the Rainbow Railroad, Immigration Equality, All Out, QDEP, Parity, The Brooklyn Community Pride Center, and Lab Shul.

Dublin-based Unthink designed the international and domestic rainbow stamps with input from LGBTQ representatives for An Post to celebrate Ireland's Pride movement, reported the Meath Chronicle.

"We are delighted to join with our staff and customers in celebrating Brod (Pride) and the Irish Pride Movement," An Post CEO David McRedmond told the newspaper.

Ireland decriminalized homosexuality in 1993. Ireland was the first country in the world to legalize same-sex marriage through a referendum with an overwhelming 62% yes vote for marriage equality in 2015.

The Irish stamps are available online, along with other Pride merchandise. Proceeds from the stamps will benefit Irish LGBTQ organizations BeLonG To and LGBT Ireland.

Got international LGBTQ news tips? Call or send them to Heather Cassell at WhatsApp: (415) 517-7239, Skype: heather.cassell, or oitwnews@gmail.com

Out in the World: EU leaders lash out at Hungary, launch legal action
Sign up!