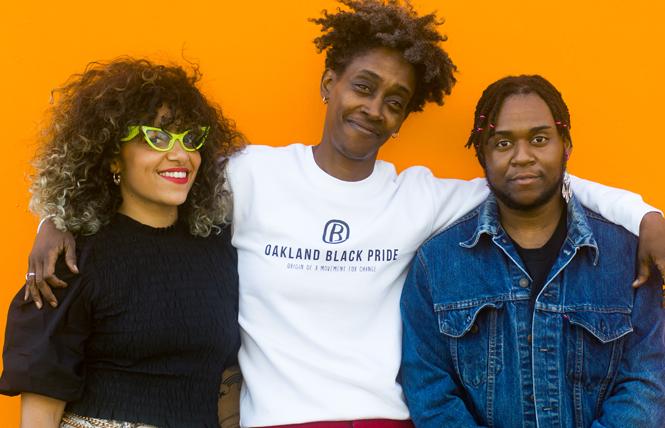 Executive Director Olaywa K. Austin, who is queer, spoke with the Bay Area Reporter to tout the major festivities — including the Queer Expo, Skate for Pride Party, and a grand finale Slayer's Ball at the waterfront Bridge Yard event venue between the MacArthur Maze and the Bay Bridge Toll Plaza.

Austin likened the ball, scheduled for 8 p.m. to 1 a.m. Sunday, June 27, to those portrayed in the FX series "Pose," which ended its run earlier this month.

"We are going to have a ball, both literally and figuratively," Austin said. "We have music, kick-ass DJs, all from the queer community. There's room enough for folks to be spread out, have a good time, and be in community. A lot of what Pride is is being able to be in community."

Being in physical community was obviously dangerous last year, at the height of the COVID-19 pandemic.

Austin said that the effect of the disease on the Black and LGBTQ communities spurred her on in the creation of the Oakland Black Pride nonprofit that is putting on the celebration "in partnership with the City of Oakland and the Oakland Parks, Recreation and Youth Development Department," according to a news release.

"It's with great pride that we welcome the Inside/OUT! Black Pride Celebration to the 'town' of Oakland," Mayor Libby Schaaf stated in the release. "In a continued effort to combat the effects of racial and gender inequality, we stand with Oakland Black Pride in honoring the unique and beautiful contributions of the Black LGBTQIA+ community."

The festival was "something as an idea I had for a while," Austin said. "A lot of what I saw [at Pride events] around my immediate area didn't look how Pride started — didn't look as Black, as transgender, as riotous, as inclusive as it had started.

"I'd been thinking about that, and then COVID hit," Austin continued. "Faced with a pandemic, a lot of the needs of myself and the Black, queer community were exhausted. A lot of our needs — the things we struggle to get anyway — were in jeopardy. So I started working on a project based on my needs and the needs of my immediate community, and three months later I had a nonprofit. This organization was a survival tactic of ours. Fast forward to now, it's Pride Month, and we have an organization with a full schedule for our community."

Also on the schedule is a Queer Expo that will take place over two days. The first day of the expo is set for Saturday, June 26, from 11 a.m. to 4 p.m. at The Lot at Tribune Tower downtown. On Sunday, June 27, from 10 a.m. to 4 p.m., the expo takes place at Raimondi Field in West Oakland.

"We have a little bit of everything," Austin said. "We have a lot of vendors — someone who makes cannabis cream, our own LGBTQ Center is handing out HIV/AIDS information, trans caterers, food trucks, a bunch of creators and makers of earrings and jewelry, arts and crafts, things like that."

Austin said that in planning the expo, "it was important to have representation of pretty much everything. In true exposition form, we've got to have a lot of queer and LGBTQIA vendors.

"Historically, I don't know if this has ever been done — an expo full of queer vendors for our community," Austin continued. "This is what I'm most excited about: putting people in the position to thrive economically."

Joe Hawkins, a gay man who is the executive director of the Oakland LGBTQ Community Center, told the B.A.R. that "we have a booth and are very supportive of what they're going to be doing."

"I literally saw the promotion in my feed and wanted to be a part of it," Hawkins said. "Many years ago, I was involved in Bay Area Black in the Life and the Oakland International Black LGBT Film Festival, so it's really great to see someone taking up the mantle and taking Black Pride to a new level."

As the B.A.R. reported in 2005, the film festival at the now-defunct old Parkway Theater was "one of the central events" of the Bay Area Black in the Life Pride Week. (The Historic Parkway Theatre on Park Boulevard is now shuttered. The New Parkway Theatre is open in Oakland's Uptown neighborhood.)

Hawkins said that at the booth the center is planning on presenting information about its resources, new clinic, sexual health services, and youth services.

"We want the community to be aware of all the services we have at the center," Hawkins said.

The center will also be providing COVID-19 vaccinations and sexually transmitted infection testing, which people can make an appointment for on its website or call 510-882-2286.

"We do have walk-ups but prefer people make appointments," Hawkins said.

The center's booth will also be offering $30 gift cards to Black and Latino gay, bisexual, or transgender individuals who come to test for HIV.

"Any Pride is a huge undertaking but more than ever we need spaces and events like Black Pride to empower our community," Hawkins said.

Other in-person events will include a Pride benefit dinner at 6 p.m. June 24 at Sobre Mesa near Lake Merritt; a queer pub crawl at 5:30 p.m. June 25 at various locations; Skate For Pride at 6 p.m. June 26 at 7th West in the Acorn Industrial neighborhood; and the Queer Kick Ball Tournament and Black Pride Family Reunion at 11 a.m. June 26 at Raimondi Field.

For more information, go to https://www.oaklandblackpride.org/

No parade, but SF gears up for post-reopening Pride weekend
Sign up!