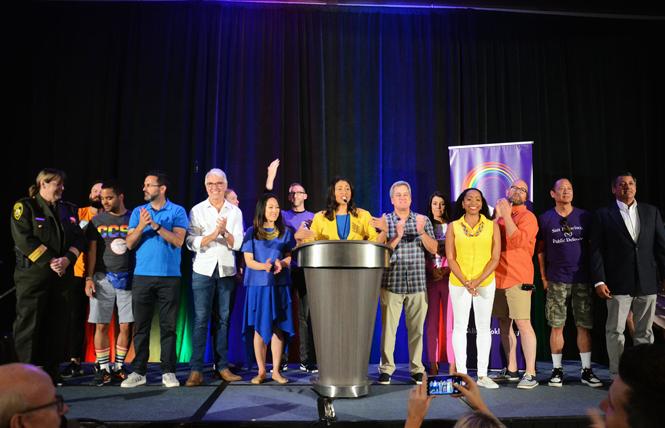 At its launch in December 1971 San Francisco's oldest LGBTQ Democratic Club operated with a "wink, wink" as being a political group for the city's LGBTQ community. It was merely known as the Alice B. Toklas Memorial Democratic Club.

Founder Jim Foster and the other 19 original members of the group chose the name of writer Gertrude Stein's partner as a code to protect their confidentiality. As former club board member Nathan Purkiss noted in an online history he created of Alice, saying one was a "member of Alice" signaled you were LGBTQ in political circles without having to directly come out of the closet.

It would take until 1980 for the club, under the leadership of then-president Connie O'Conner, to update its name to the "Alice B. Toklas Gay Democratic Club." Four decades later it expanded its name to include the full LGBTQ acronym.

And just as its name became ever more inclusive of the LGBTQ community, so has the Alice club become ever-more progressive over the years. When Alice failed to back Harvey Milk in his historic 1977 campaign to become the first out person elected in the city, instead backing a more moderate gay candidate, Milk and his allies formed their own political club called the Gay Democratic Club. (It was renamed in his honor after his assassination in 1978 and is now known as the Harvey Milk LGBTQ Democratic Club.)

Alice was long seen as the more moderate of the two queer Dem clubs, routinely snubbing progressive candidates, whether LGBTQ or straight, and endorsing ones more in the political middle. In recent election cycles, that has been far less the case.

"Who is Alice and what do we do?" posed former club co-chair David Fujimoto in his farewell message in December. "My answer has not always been the same over the past 13 years on the board. 'The more moderate LGBTQ Democratic club.' 'A progressive, yet not as progressive as Milk, club.' There's a certain complex that comes with being the older sister of the younger brother with more name recognition."

His conclusion was that Alice has become "a diverse, independent Democratic LGBTQ organization that works within the levers of power to try to make progressive change."

Take, for instance, when the Democratic Party held its presidential convention in San Francisco in 1984. Alice helped elect 18 of its members to be delegates, "more delegates than many states had," recalled then-chair Sal Rosselli, a gay man who is now president of the National Union of Healthcare Workers.

The club also produced and printed 20,000 copies of its tabloid-like newsletter "Alice Reports" each day for two weeks and had hundreds of volunteers deliver it to the hotel rooms of convention attendees as well as the national news media in town to cover the political gathering. Rosselli credits Alice's doing so with landing him several interviews on cable news.

"We got national press for the first time," recalled Rosselli, who has been an Alice member since 1979. "I remember doing CNN and one of the interviews was about the AIDS epidemic. We did a march on the floor of the convention to bring attention to the AIDS epidemic."

Over its history the club has weathered its share of "ups and downs," said Rothschild, with the AIDS epidemic being an especially dark time in its history, taking the lives of numerous members. In 1997, the club said goodbye to Jo Daly, who in 1973 became the first woman to chair Alice and its third president, after she died following a long battle with cancer.

Another blow came in August 2002 when gay political consultant Robert Barnes, an influential member of the club who also served as chair, died at the age of 42 following a seven-week battle with Guillain-Barre syndrome, a neurological disease similar to multiple sclerosis.

"I think Alice has always been a family," said Rothschild, a lawyer with the city attorney's office. "I always felt it was my political family."

Rebecca Prozan, currently Google's West Coast head of government affairs and public policy, joined Alice in 1995 as a member and became one of its many lesbian co-chairs in 2006, serving a two-year term. She pointed to the club's elevating diverse leaders over its history, in particular Theresa Sparks as its first openly transgender co-chair and as its first Black co-chair one of her fellow male co-chairs, the late attorney Julius Turman, a gay man who like Sparks served on the city's police commission.

As the club turns 50, Prozan said, "It makes me think of what an agent of change Alice has been, from having Elizabeth Edwards announce her support for same-sex marriage (at the club's 2007 Pride breakfast during her husband's presidential campaign) to changing the course of San Francisco history when they endorsed Willie Brown for mayor in 1995 (when he defeated lesbian former supervisor Roberta Achtenberg) and all the times Alice advocated for LGBTQ+ equality in the Democratic Party platform."

Current and formerly active members of Alice's family will come together to mark the club's 50th anniversary for an online "Pride Dinner" from 6 to 7:30 p.m. Thursday, June 24. The virtual event is in place of the club's normal in-person breakfast fundraiser usually held the morning of Pride Sunday at the end of June. (Canceled this year and last due to COVID, the early morning fete will return to the Hyatt Regency Hotel June 26, 2022 for its 25th anniversary.)

Its theme "LGBTQ Activism Through the Years," the dinner will feature a lineup of special guests that speaks to Alice's transformation over the years and the power it wields in local politics. Milk confidant and longtime gay progressive activist and union leader Cleve Jones will keynote the dinner, while House Speaker Nancy Pelosi (D-San Francisco) and Governor Gavin Newsom, a former San Francisco mayor and supervisor, are among those set to give remarks.

Also set to speak are onetime political rivals and former state Senators Mark Leno, a gay man with long ties to Alice, and Carole Migden, a lesbian who was a former leader of the Milk club. Another pair of former political opponents will also give remarks: gay state Senator Scott Wiener (D-San Francisco), a one time Alice co-chair, and gay District 8 Supervisor Rafael Mandelman, a former Milk club president who lost his initial race for the board seat in 2010 to Wiener.

The rivalries over the years between the Milk and Alice clubs, which also have worked collectively on myriad campaigns and causes, are remarked on by several people in their testimonial videos taped for the event, noted current Alice co-chair Gary McCoy, a gay man who recently left Pelosi's office to handle government affairs for the nonprofit HealthRIGHT 360.

"I really appreciated how a handful of folks have referenced the historical sort of rivalry between Alice and Milk," he said. "Everybody sort of comes back to a common theme of unity and also how the importance of that rivalry for many years brought out more queer people to vote."

Leno, a member of both the Alice and Milk clubs since the 1980s, drew inspiration from Foster as well as the late lesbian couple Del Martin and Phyllis Lyon, who were also active members in the early days of the Alice club.

"Clearly a historic occasion, which should not be understated in its significance," said Leno. "We take a lot for granted these days, as we made significant strides in our equal access to and protection under the law. But 50 years ago it was a very different time."

Alice leadership had to scrap much of their plans for marking the club's golden jubilee this year due to the health crisis, though it has continued to conduct its regular business virtually since last March.

"It's great to be part of a club or any organization that can turn 50," said McCoy. "It is a pretty big feat, let alone for an LGBTQ organization."

It will be turning its attention later this year toward the 2022 midterm elections and local races on the November ballot next fall as it lays the groundwork for its next five decades. The need for the Alice club and other LGBTQ organizations has not dissipated but only grown since its founding, noted Rothschild.

"I think it is important that we have openly queer candidates and people at the table and continue to break barriers, especially for queer women and transgender individuals," he said. "The struggle is not over, I hate to break the news. We still have to fight."

The cost to attend Alice's 50th Anniversary Pride Dinner begins at $50 per person. To purchase a ticket online, click here.

Pot for LGBTQ political clubs
The San Francisco cannabis store Berner's on Haight, whose owners include Conor Johnston, a gay man and former legislative aide to Mayor London Breed when she served on the Board of Supervisors, is raising money during Pride Month for both the Alice and Milk Dem clubs.

Customers who buy any two Kiva gummies can get a Pride gummy for $1. Those who buy any two-pack of Cann drinks can get an additional one for $1. The money from the promotional $1 purchases will then be divided between the two LGBTQ political groups.

Berner's is located at 1685 Haight Street at Cole.

Correction
Last week's column should have stated that California lawmakers proposed a $19 million boost in new funds for the End the Epidemics plan, with $6 million being a one-time allocation and the rest of the money ongoing to combat the spread of HIV, hepatitis C, and sexually transmitted diseases. The online version has been updated.