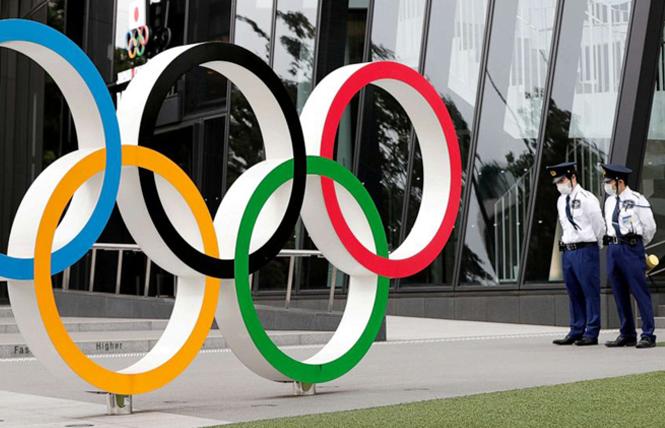 The Tokyo Olympics are still scheduled to take place starting next month, despite fears by Japanese residents that the games could become COVID super-spreader events. Photo: Courtesy ABC News

It was a bit more than a year ago that my weekly sports column in the Bay Area Reporter was suspended as part of the fallout from the global COVID-19 pandemic and the cessation of so much sports activity (especially on the recreational level). Normally in the span of 14 months my column would have been thrust upon the readership about 60 times; in the year-plus since my weekly column last appeared in late March 2020, my byline has surfaced but 10 times as news headlines warranted.

As we emerge into the new normal, my column returns, but on a twice-a-month schedule rather than weekly. This means I'll have to hold my breath for twice as long as before. Fortunately, wearing a smothering mask during my waking hours the past year has prepared me for the task.

- The 2020 Summer Olympics were postponed and are now set to open July 23, in Tokyo — sans foreign spectators. In past Olympic cycles, we have preceded most games with stories about the human rights abuses involved in constructing the facilities, the financial ruin the event can place on the hosts, and round-the-clock hype for several months to whip us into flag-waving athletic frenzy.

Under the new normal, we are being told that a substantial majority of Japanese residents don't want the Olympics to be held because they fear it will be a super-spreader event that will overwhelm the health care system while more than two-thirds of the citizens remain unvaccinated. We learn the Tokyo Olympics, whose budget has reportedly exploded from its initial $7 billion projection to as much as $35 billion, will siphon off 10,000 health care workers for its own needs. We read that hundreds of Japanese cities have either uninvited teams that planned to train in them, or that teams have uninvited themselves — again, because of fears of spreading the virus. And we hear that members of the ruling Liberal Democratic Party, while defeating a law that would have reflected the values of the Olympic Charter by protecting the civil rights of LGBTQ individuals, said queers were "morally unacceptable" and "resisting the preservation of the species that occurs naturally in biological terms," and that transgender rights in other countries meant that "men" were able to win "lots of medals" competing against women and to use women's restrooms. #foreheadpalmsmack

The new normal sure sounds a lot like the old normal.

- The Oakland A's have renamed this week's annual Pride Night to Glenn Burke Pride Night to honor the memory of the gay Bay Area native whose MLB career with the Dodgers and A's was tragically short but inspired the High Five. Special promotional event tickets are available on the team website for the Friday, June 11, game against the Kansas City Royals. Ten dollars from each special event sale is to be donated to the Glenn Burke Wellness Clinic at the Oakland LGBTQ Community Center. For more information, visit https://www.mlb.com/athletics/tickets/specials (The San Francisco Giants held their Pride Night June 5, with Honey Mahogany, a Black queer trans person recently elected chair of the San Francisco Democratic Party, singing the national anthem.)

- The 2020 EuroGames were wiped out entirely by the pandemic, but registration is ongoing for the 2021 EuroGames in Copenhagen, Denmark as organizers express optimism the four-day event will be held as scheduled, August 17-20, even as some COVID-19 restrictions remain in force.

Registration is open at through July 12. A slate of 29 sports is planned. The base registration cost is 90 euros (about $110) for members of the European Gay and Lesbian Sports Federation, and 120 euros ($146) for non-members. The event website says registrants will receive full refunds if the event is cancelled because of COVID-19.

- Former 49ers assistant football coach Katie Sowers has left the team and joined the coaching staff with the Kansas City Chiefs, but the San Francisco NFL franchise has taken steps to up its image in the queer community.

The Niners have released an apparel line it says is "the only genderless retail line released by an NFL team;" and the section of the website dedicated to its fans who identify as LGBTQ is featuring video profiles of several of its most devoted LGBTQ fans throughout June. In addition, an Activism in Sports panel video will be available on the website Tuesday, June 22. Featured speakers include Sam Rapoport, NFL senior director of diversity, equity, and inclusion; Kimberly Chexnayder, NFL Media; former MMA fighter Fallon Fox; and Kurtis Gabriel, forward for the San Jose Sharks.

- The assault on transgender inclusion in sports continues its contentious course.

Take New Zealand, for example. Weightlifter Laurel Hubbard is expected to be the first transgender athlete to compete in the Olympics if they proceed as scheduled. But while she is allowed to compete with other women at the highest level of their sport, New Zealand rugby is still clutching its pearls debating whether it will allow transgender women recreational players to compete with other women or restrict them to playing with men.

This follows World Rugby's misguided decision to ban transgender women from playing at the international level but to allow national federations to draw up their own rules for transgender inclusion in their own leagues.

"It was concluded that safety and fairness cannot presently be assured for women competing against trans women in contact rugby," World Rugby mansplained in its policy announcement.

Makes you wonder what the hell version of rugby they ever played. I routinely played against players anywhere from 50 to 150 pounds heavier than me. My safety was never assured and I never questioned the fairness of our size and strength disparities.

Jock Talk: Out athletes score at Tokyo Olympics
Sign up!