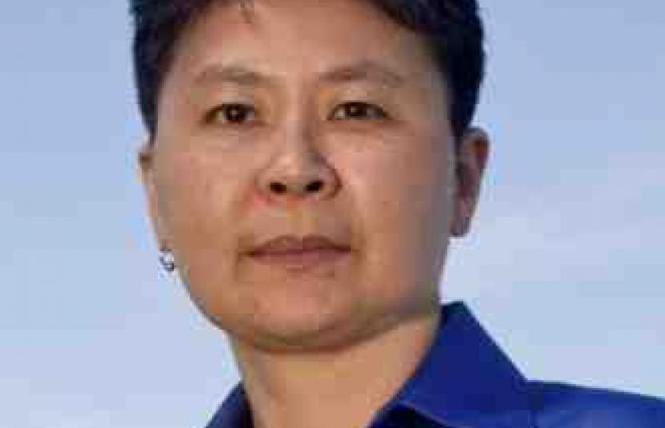 Madeleine Lim is the founder and executive director of the Queer Women of Color Media Arts Project. Photo: Courtesy USF

Queer movie buffs will have to choose between attending two of San Francisco's LGBTQ film festivals on a couple of nights this Pride Month.

Pride Night at Oracle, which is showing "In the Heights" and "Everybody is Talking About Jamie," presented by SF Pride, Frameline, and the San Francisco Giants, will happen June 11-12, at the same time as the Queer Women of Color Film Festival livestreams its films.

This is the first time in the two festivals' history that they are directly competing against each other, according to Madeleine Lim, founder and executive director of the Queer Women of Color Media Arts Project, which produces QWOCFF. In its 17th year, QWOCFF's free three-day virtual film festival is premiering 19 movies for audiences from June 11-13.

Frameline kicks off its 17-day festival June 10 running through the end of Pride Month. Tickets went on sale May 25 when the festival announced its film lineup.

Susie Kisber discovered the overlap in the two festivals' dates when she registered for the QWOCFF June 1 after she committed to volunteering at Frameline that weekend.

"I was really sad," said Kisber, who has attended nearly every QWOCFF festival for two decades and volunteers at Frameline every year.

"Frameline really should have checked in with them," Kisber added, wishing for more respect for queer women of color and QWOCMAP's work empowering the community. "We are all a community. We are all in this together."

"We are not interested in picking a fight with Frameline at all," Lim said. Her organization has a budget of $500,000 and three staff members.

"You can be in community. You can work with other sibling festivals. It just takes the desire and motivation to want to do that," she continued, stating she does not feel that desire or motivation from Frameline.

"We are in community together," Lim said, adding that what happened this year, "that did not feel like community."

Communications breakdown
Lim became aware of the conflict last month when she received a Frameline email blast May 5 teasing the festival dates. She immediately noticed the dates overlapped with the QWOCFF festival dates. She emailed gay Frameline Executive Director James Woolley about her concerns and alerted QWOCMAP's board of directors.

Woolley responded. It appeared he and queer programming director Allegra Madsen agreed the LGBTQ film festival acknowledged the mistake in a May 5 email conversation obtained by the Bay Area Reporter.

"Fair point and well made — we certainly should have reached out to discuss," Woolley wrote to Lim.

Madsen apologized in her email response to Lim, "Sorry we are having this conversation so late in the game."

Peter-Astrid Kane, a nonbinary, queer individual who's the communications manager at San Francisco Pride, explained in a statement to the B.A.R., "Pride Movie Night falls on the only weekend during Pride Month that the Giants aren't playing multiple home games."

Woolley added in a statement to the B.A.R. June 2, "This year's Frameline Film Festival was planned as a hybrid and COVID-safe event that caters to different comfort levels of our patrons. As the city begins to reopen, providing a seated outdoor option was important to the organization." He also reiterated the information about the Giants' schedule.

Kane mentioned SF Pride's own relationship with QWOCMAP in its statement to the B.A.R.

"SF Pride was thrilled to feature QWOCMAP's documentary about Bernice Bing at our Chinatown Pride event in March, which was honestly a highlight of that event," they wrote. "We sincerely hope to build on our wonderful relationship in the future."

Lim said she was approached by the Chinese Cultural Center of San Francisco to participate in SF Pride's Chinatown event. She had close to no communication with SF Pride.

However, Lim said both Madsen and Woolley were aware of this year's QWOCFF dates. They were both at the newly forming North American Queer Film Festival Alliance's meeting in February, when QWOCMAP announced its festival dates to the group.

In Madsen's May 5 response to Lim, she offered to look for ways to "amplify" the QWOCFF's closing night during Frameline's programming break on June 13. She explained Frameline's streamed films did not begin until June 17, noting that films showing prior to the streaming date were in-person only.

Lim reiterated to Woolley and Madsen that QWOCFF's festival dates and that the streaming would be live. She made it clear that it would be impossible for audiences to attend both festivals, in essence, forcing queer filmgoers to choose as Kisber had to do.

Lim provided 2022's dates for the QWOCFF and location to Frameline.

Woolley responded that he made note of QWOCFF's 2022 festival dates, and he would "ensure" Frameline would reach out to "debrief" next year's festival plans in January.

The damage was done for this year and the two festivals would have to work through it.