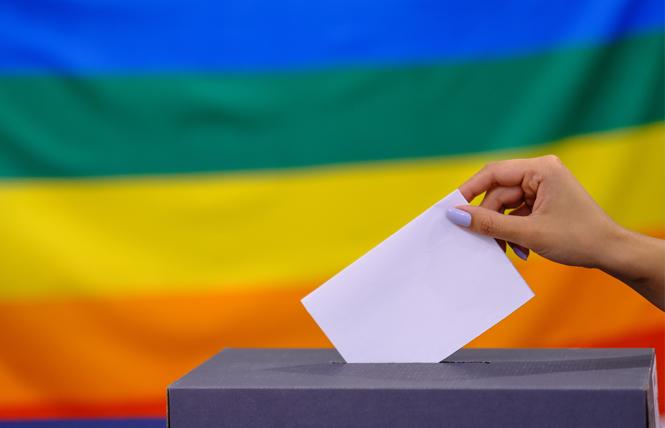 LGBTQ candidates are on the ballot in Mexico; a gay man is waiting for election results in Vietnam; and queer candidates won recently in Chile. Photo: AdobeStock/Yavdat

Several key elections with LGBTQ candidates on the ballots are playing out in Chile, Mexico, and Vietnam just in time for Pride Month.

It was a blow to Pinera's party, which won only 37 of the 155 seats for the Constitutional Convention. The I Approve Dignity coalition elected 28 representatives and numerous independent candidates who had been active in the 2019 protests.

The vote empowered the coalition, with more than two-thirds of the Constitutional Convention handing the new assembly immense power drafting a new constitution for the country.

The constitution will be the first complete overhaul of the bill of rights since 1980, when the current governing document was enacted under Pinochet's dictatorship.

The new constitution and election were fueled by the October 2019 uprising that called for a political overhaul of the system to create equity and fairness for Chileans. It will also be the first constitution to be drafted after feminist uprisings with the Women's March and the #MeToo and Time's Up movements.

Big LGBTQ win
The election was a big win for LGBTQ rights as eight openly queer candidates were elected to the new assembly, reported the Los Angeles Blade.

Their election comes at a time when Chile has been experiencing a wave of hate crimes against LGBTQ people, according to AllOut, which launched a petition with Chilean LGBTQ rights organization Fundacion Iguales.

The eight new assembly members of the Constitutional Convention will also shape Chile's new document. LGBTQ activists expressed hope that with queer people at the table shaping the country's new bill of rights positive changes will occur. They called for including non-discrimination based on sexual orientation and gender identity as well protections and full equality for LGBTQ individuals and families under the Zamudio Law. That law was named after Daniel Zamudio, who was beaten to death in a park in 2012 in Santiago for being gay.

"Inasmuch as this allows the rich diversity of Chile to have a voice and vote in the most important transformation process faced by the country," Movilh spokesperson Óscar Rementería told the Blade. "Only with this, each and every one of the homo/transphobic laws and public policies that still persist in Chile can be eliminated at once."

Chileans will return to the polls in November to elect a president and members of Congress.

Vietnam
The-Huy Luong, the first openly gay man to nominate himself as an independent candidate for Vietnam's National Assembly and Hanoi People's Council, is awaiting the country's May 23 election results. The Southeast Asian country went to the polls for the national election amid another COVID surge, which has complicated the process.

Winners for the 500 National Assembly seats are expected to be announced next week.

"I may be the first LGBT person to run for a National Assembly seat, but I hope I will not be the only one," The-Huy Luong, 33, told the South China Morning Post. "Whatever the result, it will be a lesson, an experience for other people who want to do more than me in the future."

LGBTQ Vietnamese people both in that country and in the United States are excited by The-Huy Luong's bid.

"I am thrilled to see an openly gay man run for politics in Vietnam, because people normally think LGBTI are 'bad guys' and more people like Huy will make them change their view about us," Nguyen Hoang, a gay man in Hanoi, told the VnExpress International.

"Now is the perfect time for Vietnam to elect its first openly gay politician," said American-raised Vietnamese queer activist Amazin LeThi. "It's a historical moment for the Vietnamese LGBTQ community that we have our first openly gay candidate hoping to win a seat at the National Assembly.

"Just by him running sends a powerful message to the Vietnamese LGBTQ community. He has now opened the door for other LGBTQ candidates in the future to run, I hope he is the first of many out LGBTQ politicians in the country," she said, adding that representation at the government level is important.

The-Huy Luong has worked for LGBTQ and human rights for a decade and is a rising star in Vietnam. He has addressed a session at the United Nations Human Rights Security Council and has received accolades for his work. He received a Fulbright scholarship and a Dean's Fellowship Award to pursue a master of laws, specializing in law and sexuality, at UCLA in 2018.

The-Huy Luong returned to Vietnam in 2019 and became the director of the Institute for Studies of Society, Economy, and Environment, a Hanoi-based minority equal rights and human rights organization. He previously was the LGBT rights program manager for four years, according to his LinkedIn profile.

When The-Huy Luong threw his hat into the political ring he told VnExpress International he did it, "with knowledge of law and experience in social works, I want to contribute (to the development of the country) and share my opinions as a representative of the people ... the young and the minority."

Independent candidates are vetted by the Vietnamese Fatherland Front, which is essentially controlled by the Communist Party, reported Reuters. The party retains tight control over the country and its media outlets.

The media outlet reported a total of 868 candidates nominated by the central and local government ran for a seat in the National Assembly this year. Some 92% of the candidates who bid for one of the 500 seats in the National Assembly are Communist Party members. There were fewer independent candidates, 76, compared to 97 in the 2016 race. The-Huy Luong was one of the 76 who made it onto the ballot, reported the VnExpress International.

The Communist Party is losing some of its hold on Vietnam, at least among the number of assembly deputies. During the last three elections the party's seats have been reduced to 50% of the assembly and there is hope for some independent candidates. Vietnam's legislature occasionally rejects the Communist Party-dominated government proposals.

To the outside world, Vietnam appears to be relatively liberal compared to other Asian countries. The country lifted its ban on same-sex marriage in 2015, allowing LGBTQ Vietnamese to celebrate their commitment to each other, but the country still does not legally recognize the relationships. Gender changes are still not allowed.

The country's unique bicycle rainbow Pride parade, Viet Pride, has gained in popularity since its first event in Hanoi, the capital, in 2012. However, the reality is LGBTQ people are not looked upon favorably in Vietnamese society, reports have stated.

Misinformation about sexual orientation and gender identity is widespread in schools and at home, where some children receive the message that being gay is a mental illness, according to a Human Rights Watch report, "My Teacher Said I Had a Disease: Barriers to the Right to Education for LGBT Youth in Vietnam." Published last year, the report included findings from The-Huy Luong's organization, iSEE's 2016 report, "Is it because I am LGBT?: Discrimination based on sexual orientation and gender identity in Viet Nam," that found LGBTQ Vietnamese of all ages experience widespread discrimination. HRW also conducted its own in-depth interviews with 52 Vietnamese LGBTQ-identified youth, teachers, and school administrators for the report.

In 2019, Vietnam, with the assistance of U.N. agencies, produced guidelines for an LGBTQ-inclusive comprehensive sexuality education curriculum, reported HRW. As of today, the curriculum has not been created.

"During my work on LGBT issues, I have been told by many people to be a 'normal man,' that there was no need to come out as LGBT," The-Huy Luong said in a video segment about his historic run for the National Assembly.

"When I decided to participate in sociopolitical work like other Vietnamese citizens, their arguments against me became: remain where you are as an LGBT person," he said. "Some people find it hard to accept someone from the minority LGBT community representing them at a powerful legislative body."

Mexico
A historic number of LGBTQ candidates are running for office for the Latin American country's midterm elections.

LGBTQ candidates make up 1.9% of the more than 5,300 contenders running for different offices in the midterm elections, according to the INE identity questionnaire.

When Mexicans go to the polls June 6, they will be able to select from candidates like Lady Tacos de Canasta, star of the Netflix documentary, "Taco Chronicles," and Mexico City transgender actress Roshell Terranova, who are on the ballot.

Lady Tacos de Canasta, 36, a transgender woman, is running under her deadname Juan Francisco Martinez, as a candidate from the Equity, Freedom and Gender Party, reported France 24. Lady Tacos, who is originally from Oaxaca, is campaigning for a seat in the capital's legislative assembly. Her platform is to improve LGBTQ health care services and protection for street vendors, reported France 24.

"I think we already won. We have already opened this door, which is what we wanted," she told the French media outlet.

Terranova is running for a congressional seat on an LGBTQ and human rights platform with the Movimiento Ciudadano party, which registered 44 LGBTQ+ candidates, including Terranova, with the INE to renew the Chamber of Deputies in the midterm elections. Around 40 transgender candidates are running for the Chamber of Deputies alone, reported France 24.

Only one transgender person, Rubi Araujo, has ever been elected to public office in Mexico. Araujo was elected in 2016 as a municipal councilor in Guanajuato, central state.

"We have to get our act together, the solution is in the citizen, we know for sure how we have been governed in the past, how we are being governed in the present and Movimiento Ciudadano is an optimistic third option," Terranova told ADN.

"They have to be represented there because that is how our Mexican society is, we have a diversity of people and we manifest ourselves differently, but also because these people can help us look for better solutions to problems," Favela told ADN.

Mexicans will elect 500 members of the lower house of Congress, the Chamber of Deputies, as well as 15 state governors and around 20,000 local politicians next week.

Out in the World: Czech Republic marriage equality bill moves forward
Sign up!