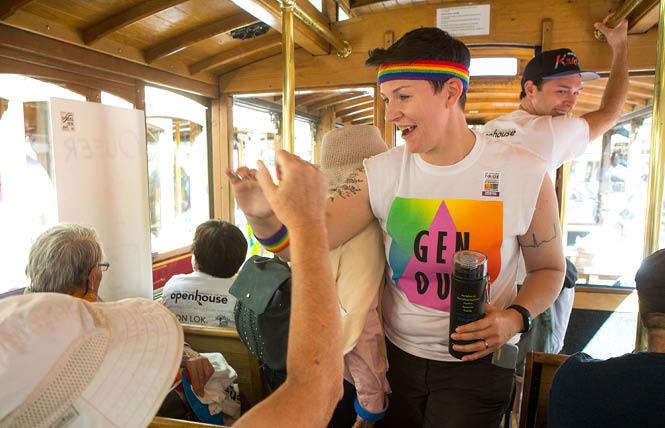 After more than four years with Openhouse, Karyn Skultety, Ph.D., is bowing out as executive director of the nonprofit provider of LGBTQ senior services in San Francisco. During her time with the agency she has doubled its staffing and overseen the opening of its new offices and affordable housing development on Laguna Street.

Ahead of her last day on May 31, Skultety received a going-away present of sorts from city leaders who chose Openhouse and its partner Mercy Housing to design and construct a new affordable housing project that is welcoming to LGBTQ seniors. Located at 1939 Market Street, the city-owned site is a block away from the 119-unit development the two agencies built on Laguna Street that houses a majority of LGBTQ older adults.

Skultety, 45, a bisexual married mom, had announced in January that she intended to step down from her leadership post this spring in order to move to Denver to be closer to her family and help care for her aging parents. She and her wife moved their two children there last month, while Skultety returned to San Francisco to finish her work with Openhouse.

The agency is toasting Skultety with a virtual celebration at 3 p.m. Wednesday, May 26, during which it will christen the balcony at its still-to-be-opened community center in her honor. As of Tuesday, the nonprofit was shy roughly $16,000 of reaching a fundraising goal of $100,000 through the event, which will be viewable online.

Officially to be known as the Dr. Karyn Skultety Balcony, it already has earned the nickname of "the bow tie balcony" due to Skultety's sartorial neckwear. (She owns close to 40 bow ties.) Overlooking Laguna Street, the space is meant for community gatherings and celebrations.

"I am so excited to have a symbol on this building for her, as she was such a part of opening it up," said Tim Sweeney, 67, a gay man whose two years as co-chair of Openhouse's board of directors will end July 1. "She created so much inclusion and dignity and services for our LGBTQ seniors. We have just been blessed by Karyn's presence."

Speaking by phone from his hometown of Billings, Montana, where he had moved back to in December from San Francisco in order to be a caretaker for an elderly relative, Sweeney said the board was "crestfallen" when Skultety disclosed she had made a similar choice but was fully supportive of her decision.

"Karyn has just been transformational," said Sweeney, who plans to attend the balcony dedication in person sporting a bow tie.

Though she is moving out of state, Skultety plans to remain involved with Openhouse's staff and community members going forward. She is looking forward to being a supporter of the agency again rather than in a leadership role.

With her wife, who works for Salesforce, able to do her job remotely, Skultety plans to take some time off before she looks for a new job. She has a doctorate in clinical psychology from the University of Massachusetts in addition to her expertise in aging issues.

"It's a decision motivated by my personhood, not by my profession first," she said of this transition in her life. "It is a big shift for me. It is a good moment for me." 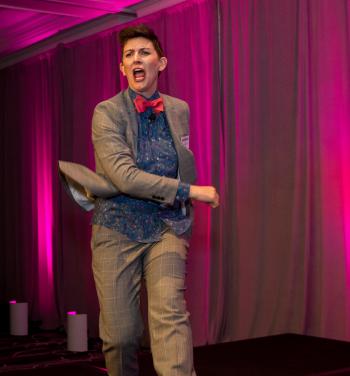 Pivoting under COVID
Her tenure at Openhouse is coming to an end just as the COVID pandemic appears to be ebbing in the city, state, and much of the country. California expects to be able to fully reopen businesses and most public activities, while ending its mask mandate, June 15.

Last March, as the health crisis was burgeoning and spreading quickly among seniors, Skultety shuttered her agency's offices and quickly pivoted to providing its services online. She and her 30-person staff also decided to do weekly phone check-ins with its clients, who now number 3,000 people per year.

"Forty to 50% of the people we serve really don't have access to technology or virtual platforms at all," said Skultety, making it difficult to provide services solely online. "It is a huge issue the city needs to take on. Let's provide internet to people."

Another issue that quickly became apparent is the food insecurity among LGBTQ seniors age 60 or older in the city, estimated to number more than 22,220. With its weekly in-person lunch program on hiatus because of the pandemic, in addition to the city's senior centers being closed, Openhouse worked with the city's Department of Disabilities and Aging Services to launch a food delivery program to its clients. It also recruited volunteers who would shop for seniors fearful they would contract COVID if they left their homes.

"Within two weeks we had people without groceries, without food who were struggling to make it. In a week they would have been without food," recalled Skultety.

Shireen McSpadden, who is also bisexual and departed earlier this month as executive director of DAS to oversee the city's homelessness department, told the B.A.R. that Skultety will be missed.

"Karyn has been so fantastic. She is so dynamic, she had such great ideas and such amazing energy," said McSpadden. "I am personally going to miss working with her, even though I am not going to be at DAS."

The experience of the last year has only affirmed for Skultety why an agency like Openhouse is needed in the city. One survey Openhouse conducted about the impact of COVID on its clients found that 30% had gone three days or longer without speaking to another person.

And while life is returning to some semblance of normalcy due to the ever-increasing number of residents over the age of 12 getting vaccinated, Skultety expressed concern about what repercussions could still emerge in time with senior residents. Her successor is likely to be confronted with increased mental health and housing issues among the agency's clients, Skultety predicted.

"We are really starting to see the impacts of what this long period of isolation meant for LGBTQ seniors. I think we are going to see some really struggle; it is an element that we all know is there and feel is there but haven't been able to see," she said. "When we see the eviction moratoriums lifted, we will see some real challenges emerge."

Her fear is that accessing services will become that much harder for seniors just as the need for them becomes greater.

"It has gotten worse economically for people who were already in this city living in difficult situations. People's mental health, health cognition is in a significantly worse place," she noted. "For people to access services or get help to deal with their landlord trying to push them out will get harder."

One project that Skultety helped create in partnership with another senior service agency, On Lok, is the nation's first community-based adult day programs co-designed for and with the LGBTQ+ community. But the Community Day Services program has long been delayed, first due to construction issues that prolonged work on Openhouse's new community center that was to have opened in the summer of 2019.

Then came the COVID pandemic, further delaying the ribbon-cutting ceremony for the center at 75 Laguna that will be home to the adult day programs. Skultety demurred when asked about the problems that arose with the contractor the city required it to work with but did say it taught her a lesson in advocacy. The cost of the center nearly doubled from its original estimate to $5 million.

"I continue to think there really needs to be a way where when the city is aware of multiple issues with contractors or records of multiple violations or legal issues that arise around a contractor, somehow that needs to be tracked and monitored with more support from the city on relegating that than we have seen," she said. "I can't say a lot about it because we are still resolving some of the concerns. I learned a lot about how vocal a nonprofit has to be in advocating in those situations."

Skultety told the B.A.R. that she is "pleased the community center is completed" and ready for use when the COVID protocols end and it is safe to do so. The agency is expected to host a party in celebration of the final piece of its Laguna campus opening to the public.

"If anything will get me back to San Francisco that will be it," said Skultety, acknowledging one of her regrets will be not being able to preside over the ribbon cutting as the agency's executive director. "This project saw all different people coming together to make this impossible dream a reality. I leave feeling so confident of how great that is going to be for the community."

Successor expected in June
To assist with the leadership transition through at least the end of June, the agency hired Maritza Penagos, who had served as interim executive director of El/La Para TransLatinas from 2018 through April 2020 as that nonprofit searched for a permanent leader. Penagos joined Openhouse in March on a part-time basis to assist Skultety after a longtime employee of the nonprofit, Michelle Alcevedo, departed as its director of programs.

Sweeney told the B.A.R. the board expects to name a new executive director early next month. It retained the nonprofit executive search firm Carlson Beck, the same one it used when it hired Skultety, to work with it again on the recruitment process.

"I think we are looking for that same dynamism, same effervescence. She has just tireless energy and commitment," Sweeney said. "We want to see the same qualities in the next person leading Openhouse forward."

Sweeney told the B.A.R. the search firm has approached about 60 people from across the country about the executive director position. The interest in the job, and the realization that Openhouse has such a positive reputation nationally, has pleased Skultety.

"Nothing can make me more happy than that," she said.

If anything can, it is the "authentic, joyous connection" Skultety forged with her staff and the LGBTQ seniors she has met in San Francisco.

"I just feel — you are going to make me cry — I feel deeply connected and loved and appreciated and I hope ... I just go to bed at night hoping the LGBTQ seniors I have been lucky enough to get to know know how deeply connected I feel to them and deeply grateful for their resilience and guidance."