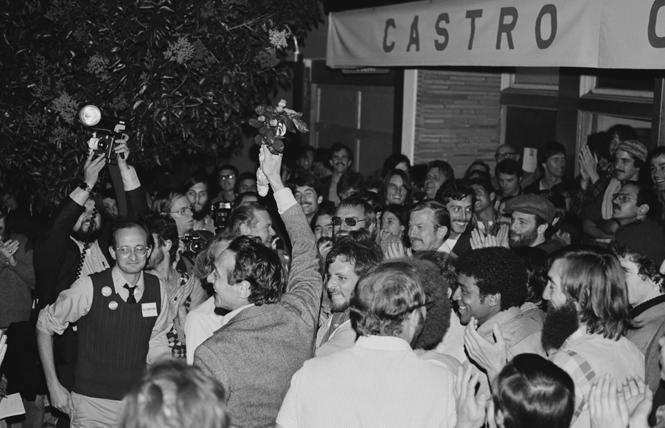 Harvey Milk holds a bouquet of flowers and is surrounded by supporters on election night 1977 when he won a seat on the San Francisco Board of Supervisors. Photo: Dan Nicoletta

After holding a virtual event last year due to the COVID pandemic, San Francisco LGBTQ leaders are once again hosting an in-person celebration to mark Harvey Milk Day this year. But with a nod to ending the health crisis, they will be offering a limited supply of vaccinations for the virus Saturday in addition to the usual lineup of entertainment and speeches from elected officials and community members.

The day of special significance in California marks the late gay icon's 91st birthday this year. Milk was the first openly gay person elected to office in San Francisco and California in 1977 when he won a seat on the San Francisco Board of Supervisors. He and then-mayor George Moscone were assassinated in November 1978 by disgruntled ex-supervisor Dan White.

Dubbed the Harvey Milk Day Community Recovery Celebration, this year's Milk Day event will take place May 22 from 11 a.m. to 6 p.m. at various locations in the city's LGBTQ Castro neighborhood. A stage for the speakers, DJs, and performers will be set up in Jane Warner Plaza at the intersection of 17th, Castro and Market streets.

On Noe Street between Market and Beaver streets will be where health providers will be offering Johnson & Johnson's vaccine to the first 200 people who request it. The single-shot doses will be handed out on a first-come, first-served basis.

And along 18th Street between Collingwood and Hartford streets, which has been closed on weekends to vehicle traffic since last fall to allow restaurants and bars to safely serve patrons outside, organizers of the Harvey Milk Day celebration have invited local nonprofits and neighborhood groups to set up informational booths.

"So much about this is about helping promote the resources and needs being accessed by our community members. It is kind of a preview of what we hope to have with our future community hub," said Stephen Torres, secretary of the Castro LGBTQ Cultural District, which has taken a lead role in organizing this year's Milk Day event.

The district is looking to find space somewhere in the Castro where it can offer various programs and services, such as a food pantry, or informational hours for people seeking assistance or want to be connected to community groups. It is modeled after the food hub that the city's Latino Task Force set up on a block of Alabama Street in the Mission district.

Partnering with the Castro LGBTQ Cultural District on the Milk Day event is the Castro Merchants association, the Castro/Upper Market Community Benefit District, the GLBT Historical Society, the Harvey Milk and Alice B. Toklas LGBTQ Democratic clubs, the Friends of Harvey Milk Plaza, the San Francisco AIDS Foundation, LYRIC, Openhouse, the city's Office of Transgender Initiatives, the Department of Public Health, and gay bar the Lookout. QR codes will be posted around the Castro Saturday that people can use to pull up a map and guide to the days' festivities.

Organizers will be asking attendees to adhere to the latest COVID protocols. For people fully vaccinated, they no longer need to wear masks outdoors though may want to put one on in a large crowd.

"We want to welcome them back to have some semblance of normalcy," said Torres. "This will be the first time for a lot of people being outside. We want to make it friendly and engaging."

Participants will join LGBTQ Democratic Party activists and community leaders from across the state for a conversation about building the bench of queer leadership in elected offices and a celebration of those serving now.

Speakers will also remember the legacy of Milk and touch on how the implementation of LGBTQIA+ inclusive school curricula is a crucial site for cultural change, according to an email from organizers.

The Zoom event is free. To register,

Trans archive would be a first for Bay Area