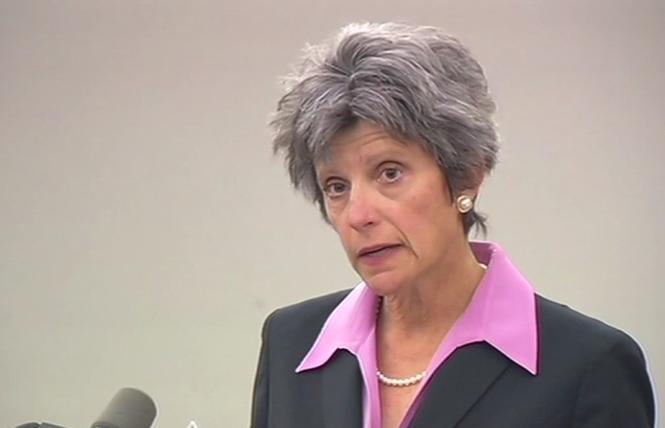 Sonoma County District Attorney Jill Ravitch will be facing a recall election later this year, the registrar of voters confirmed May 11.

"Proponents of the recall have gathered more than the required 30,056 valid signatures of registered voters to trigger a recall election," Deva Marie Proto, the Sonoma County clerk-recorder-assessor-registrar of voters, stated in a news release May 12. "As a result, the recall question will be heading to voters in a special election on a date later this year. The Board of Supervisors has to set the election date within 14 days of the petition being certified to them. That matter will be brought before them at the May 25 board meeting. The Registrar of Voters will be recommending an election date on September 14."

Ravitch, a lesbian, had announced last fall, shortly before the recall effort began in late October, that she would be retiring when her current term expires in 2022. At that time three people — Esther Lemus, a deputy district attorney who is a Windsor councilmember; Brian Staebell, a chief deputy district attorney; and Omar Figueroa, a cannabis attorney — said they were exploring the possibility of running, according to the Santa Rosa Press Democrat.

The recall campaign was launched by developer Bill Gallaher and his family, the Press Democrat reported, after the company running senior care homes they owned paid $500,000 to settle a lawsuit filed by prosecutors over misconduct during the 2017 Tubbs fire. About 100 frail residents were left behind at the Fountaingrove senior care homes as the fire approached, though they were able to be rescued.

On April 25 on Facebook, Ravitch thanked those opposing the recall effort.
"I just saw the letter by the noDArecall campaign and want to thank the committee and hundreds of supporters who oppose this one man's attempt to have me tossed out for doing my job," she stated. "The independence of this position is what has allowed my office to pursue charges against rich developers, elected officials, power companies, law enforcement officers and any person or business that violates our laws in this county."

"It is estimated that this recall may cost Sonoma County taxpayers between $500,000 to $800,000, if it were to be placed onto the ballot," the party stated in a resolution. "If this recall were to be successful, it would decrease the term of Sonoma County District Attorney Jill Ravitch by approximately a year."

The Sonoma County Republican Party did not respond to a request for comment.

In 2014, Ravitch faced criticism for declining to charge a sheriff's deputy who killed an unarmed 13-year-old the previous year, according to the San Francisco Examiner.

Andy Lopez was shot by Deputy Erick Gelhaus, the DA's office had announced; but Ravitch insisted "[Gelhaus] believed honestly and reasonably that he was faced with a do or die dilemma."

Ravitch has also faced questions about her handling of sexual assault allegations against Windsor Mayor Dominic Foppoli, which the San Francisco Chronicle broke on April 8. Foppoli has refused to step down in spite of pressure to resign, and may be facing a recall himself, as well. The town of Windsor asked Ravitch to open a grand jury investigation into Foppoli last week.