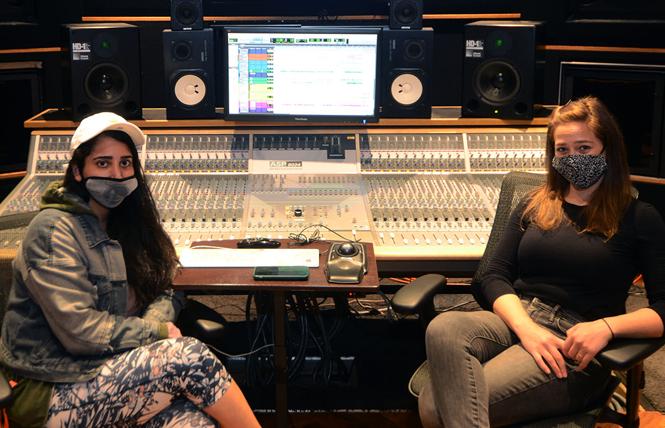 Due to the COVID pandemic, the group had to split up who could be in the recording booth on different days. Masks had to be worn the entire time, and everyone had to abide by social distancing requirements.

"They had great COVID protocols to make sure no one got sick while we were doing this," recalled Rhonda Kinard, a queer woman who performs bass in The Onyx.

The band's three instrumentalists came in first then the vocalists entered the studio to work with Veronica Simonetti, a recording engineer at WAM. To assist the singers in syncing up with the recorded music, Kinard was there for all four recording days.

"It was beautiful. I found the session to be very well organized. Veronica and the folks we were working with at WAM were extremely easy to communicate with," Kinard told the Bay Area Reporter in a recent phone interview. "We felt like we were in good hands. It was nice to have a team of women working on this music, especially since we are a band of women."

WAM founder and Executive Director Terri Winston, who is herself queer, had approached the group about recording its new music at the nonprofit's studio after seeing it perform. Not only did the nonprofit end up covering all of the expenses to record The Onyx's album, said Kinard, it also gave it $2,000 to use toward promotional efforts.

The Onyx has been mastering the songs for its new album and plans to release it sometime this summer. The band had first learned about WAM in 2019 a year after it had formed and was invited to perform at the nonprofit's Local Sirens showcase.

"It felt wonderful; it felt very validating, and we felt seen," said Kinard. "It was really nice to have this woman who has access — not just access to all these resources, she is the director — to have this person make available these resources through their grant funders and things like that so we are able to get our music out into the world. It is pretty incredible."

Winston founded WAM in 2003 while she was a tenured professor and director of the Sound Recording Arts Program at City College of San Francisco from 2001 to 2011. Her goal was to help diversify the recording industry, as according to WAM less than 5% of the people creating the sounds, music, and media that people encounter on a daily basis are women and/or gender-nonconforming individuals.

At the same time there has been an "alarming 70% decline," noted WAM, over the last two decades in the number of women and girls enrolling in college STEM (science, technology, engineering, and math) programs.

"I think WAM is a pretty incredible organization," said Elena Botkin-Levy, a queer woman who, as of April 1, is now overseeing the nonprofit's special projects.

Formerly WAM's managing director and director of education, Botkin-Levy joined the nonprofit after working in journalism and as an audio educator. Through WAM's educational offerings for women, girls, and gender diverse individuals interested in audio careers, the nonprofit is "thinking about how do we make sure diverse voices are creating all of the sound in our lives," said Botkin-Levy.

Citing her busy work schedule, Winston declined the B.A.R.'s interview request for this story. According to WAM it is the only professional recording studio in the world built and run by women and gender-nonconforming individuals. Each year it educates and trains more than 2,000 underserved women, girls, and gender diverse individuals interested in STEM and creative technology studies.

"It is such a huge part of what we do because a lot of our focus is on folks behind the scenes," said Botkin-Levy. "So the engineers behind the console or the folks creating beats or doing audio technology or engineering, there are so much and so many pathways and job opportunities for folks in this field."

Work with schools
The nonprofit works with various public school districts in the Bay Area and also offers an internship program for college students and educational classes for adults. Normally hands-on, in-person offerings, WAM's classes and trainings it provided to 4,000 women, girls and gender diverse folks in 2020 were largely conducted virtually due to the health crisis. One benefit in doing so was attracting a global audience.

"It is interesting to think about how to get people, particularly girls, excited about these fields. They love music already, so opening their eyes to the work and career paths they can take in this industry is really important for us," said Botkin-Levy.

While men and boys are welcome to sign up for WAM's programs, Botkin-Levy said the nonprofit asks them to consider that their doing so takes up a spot that could go to women or transgender and nonbinary individuals.

"Because our focus is on increasing the gender balance in these sectors, we ask folks to make decisions on how they are supporting that work," she said. "So no one is turned away, we just want people to be mindful if they are taking a seat that is one less woman or gender-nonconforming individual we can serve."

As for usage of its recording studios, any band or musician is welcome to sign up for a session. Sheila E., the Kronos Quartet, and Neko Case are among some of the award-wining musicians who have recorded at WAM's studios over the years.

The nonprofit in 2014 purchased its building at 542 Natoma Street at Seventh Street and opened up the recording studios it built a year later. Rates vary for studio time, and all include a WAM engineer to work with the recording artist(s). A full day up to 10 hours costs $450, a half day is priced at $250, and the hourly charge with a two-hour minimum is going for $75.

"Whenever someone is booking time in the studio, they are always working with a woman or gender diverse individuals; that is the incredible part of our studio," noted Botkin-Levy. "We love it when anybody books time, and they can do that on the website."

Kinard told the B.A.R. she is still floored by the fact The Onyx was able to record its upcoming album during the health crisis because of WAM.

"I think it is really incredible we were still able to work with them despite all of the challenges and need to reschedule several times because of statewide shutdowns or local ordinances," said Kinard. "It was really great. It's pretty amazing this was able to happen at all."

After the positive experience the group had at WAM's studio and with its professional staff, Kinard has been singing its praises to other musicians and bands she knows. She told the B.A.R. she is surprised that the nonprofit doesn't have a wider reputation within the music industry.

"I will recommend WAM to any and everyone. It has state-of-the-art equipment, and they know what they are doing," said Kinard. "They are women and gender-nonconforming people so they bring different experiences and identities than folks might be accustomed to to the process."

To learn more about WAM and the programs it offers, visit https://womensaudiomission.org/