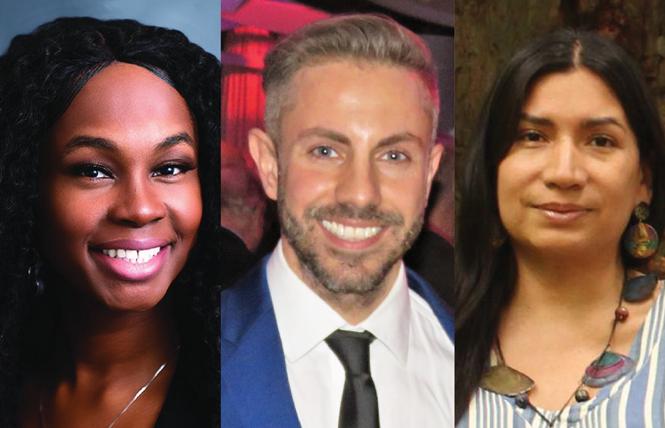 The reconstituted LGBTQI+ Advisory Committee for the San Francisco Human Rights Commission is beginning to take shape, with the oversight body set to recommend applicants for all but one of the 25 committee members at its May 13 meeting.

Mayor London Breed will then need to sign off on the 24 appointees and swear them in before their selection becomes official, said HRC Vice Chair Joseph Sweiss, a queer man who has been working to revive the advisory committee.

It is expected that the new LGBTQI+ Advisory Committee members will hold their first meeting sometime in late June during Pride Month or early in July. As the Bay Area Reporter has previously reported, it has been more than three years since such an advisory group has met.

The COVID pandemic delayed the process to recruit members for the revamped advisory committee. Its seats will now be divvied up between community members, representatives from elected officials, and staff or leaders from city-based LGBTQ nonprofits and social service agencies.

Adkins, Paulino, and Baraka are all gay men, while Hajee is bisexual. As the B.A.R. previously reported, Baraka is suing the fire department for alleged discrimination due to his being an out Black man. The person to serve in the fifth seat representing an elected official has yet to be named.

Among those to serve in the 10 seats dedicated for community members are Michelle Meow, a lesbian and former president of the San Francisco LGBT Pride Celebration Committee; intersex therapist Niki Khanna; USF university chaplain the Reverend Donal Godfrey, a gay Jesuit; therapist Roger Kuhn, a two-spirit man who is a member of the Poarch Creek Tribe; and Instituto Familiar de la Raza development director Noris Chavarria.

Roughly 100 people applied to serve on the advisory committee, which is now only required to meet at least quarterly, instead of 10 times a year. According to an HRC staff report, part of its vision is that "by centering the most marginalized, we are rooted in the collective liberation of all community members."

And the mission of the new HRC's LGBTQI+ Advisory Committee "is to help expand full freedom, justice and equity for all members in the LGBTQI+ community in San Francisco through: coalition building, advocacy, funding, policy, and technical assistance."

The San Francisco Human Rights Commission meeting begins at 5 p.m. Thursday, May 13. For information on how to watch the livestream of the meeting, click here.

LGBTQ API week proposed in SF
In light of the uptick in violent attacks and harassment of Asian Americans and Pacific Islanders during the COVID pandemic, local leaders are seeking to have the city declare May 22-29 as Queer and Transgender Asian and Pacific Islanders Week in the City and County of San Francisco.

Mandelman introduced a resolution during the Board of Supervisors' May 11 meeting in support of the weeklong observance. The supervisors are set to vote on it when they meet Tuesday, May 18. The city already celebrates May as Asian Pacific American Heritage Month.

It is believed that San Francisco would be the first city in the country to declare a QTAPI Week. Leaders of the GLBTQ+ Asian Pacific Alliance, which recently held several rallies in the city's LGBTQ Castro district to protest the rise in AAPI hate, and the Bay Area QTAPI Coalition have worked with Mandelman on the QTAPI Week proposal.

During the observance, various QTAPI groups plan to host member meetings, networking activities, capacity building events, and supportive facilitated conversations to further their work. Its starting on May 22 coincides with the annual observances of Harvey Milk Day, a day of special recognition in California timed to the birthday of the late gay San Francisco supervisor.

"QTAPI Week is a time when organizers demonstrate the strength and resilience of the Asian American community in the face of continued violence as well as pride in identity as part of the LGBTQ+ community," states the resolution.

Web Extra: For more queer political news, be sure to check http://www.ebar.com Monday mornings for Political Notes, the notebook's online companion. This week's column reported on the push to get more Bay Area cities than ever to fly a version of the Pride flag this June.