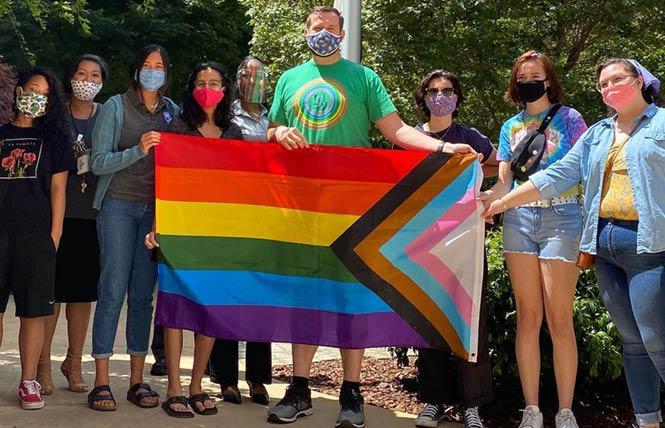 Not only are more Bay Area cities than ever expected to raise the Pride flag this June, a number are eschewing the traditional version of the LGBTQ symbol for flags with more inclusive designs.

At the request of San Mateo County LGBTQ leaders, cities on the Peninsula are being asked to fly the Progress Pride flag throughout Pride Month this year. Daniel Quasar designed it in 2018 by combining versions of the Philadelphia and the transgender pride flags. The Philly version includes black and brown stripes at the top of the flag in addition to the standard six colors of the rainbow.

Those two additional colors and the blue, pink, and white stripes of the trans flag form a chevron that points right on the Progress flag to symbolize marching toward a better future. Sacramento city leaders had raised it last June for the first time, as the Bay Area Reporter noted at the time, and the Merced City Council will fly it this June in the city's Bob Hart Square.

Tanya Beat, who identifies as lesbian and queer and is director of the San Mateo County LGBTQ Commission, told the B.A.R. that the county government will raise the Progress flag for the first time this year June 1 in front of its offices in Redwood City and fly it throughout the month. Belmont and South San Francisco city officials also plan to fly that version of the Pride flag next month.

"We are inviting people to, I think, learn what the Progress flag is and have reason to fly it because it is all about equity and inclusion," said Beat. "I wouldn't be surprised if other cities raise it that Tuesday, June 1. We are right in the midst of our communications with the cities."

This will mark the first Pride Month observance in an official public capacity for bisexual South San Francisco City Councilman James Coleman, as he was elected in November as the first LGBTQ person to serve on his council. He told the B.A.R. the city opted to raise the Progress flag due to the request from the commission and will also be approving a Pride Month proclamation at its May 26 meeting.

"The Progress Pride flag centers the experiences of trans, Black, and Brown members of the LGBTQ+ community. As a member of the queer community myself, I'm proud that my council colleagues and I are raising this flag in June," said Coleman, who is of Asian and white descent. "In addition to this, we as a city must work to turn words into action, and create a more inclusive and welcoming community to people of all backgrounds and identities."

The county commission has incorporated the Progress Pride flag into its own symbol this year. And it has created a website with easy instructions for city leaders and others on how to properly display the various versions of the Pride flag.

In San Francisco, Mayor London Breed raised the traditional version of the Pride flag at City Hall last June 3. Asked by the B.A.R. if a different version would be flown this year, San Francisco Office of Transgender Initiatives Executive Director Clair Farley, a trans woman who is also a mayoral adviser, said the planning has just begun for the 2021 event.

"We are in the process of finalizing the date and the details for the mayor's flag raising and kickoff for June," responded Farley, who was chosen to be one of this year's Pride community grand marshals by the San Francisco LGBT Pride Celebration Committee Board of Directors.

Every city recognized Pride in 2020
As the B.A.R. reported last June, LGBTQ advocates in San Mateo County achieved their goal of having every single city in their jurisdiction celebrate June as Pride Month in some manner for the first time. All 20 issued Pride proclamations, while 13 flew the Pride flag.

Contra Costa County LGBTQ leaders also achieved for the first time in 2020 seeing all 19 cities and towns in the East Bay jurisdiction marked Pride Month in some fashion. Fifteen flew a Pride flag last year, and advocates are hoping to see even more do so this year.

LGBTQ advocates are also asking various cities and school districts in Alameda County to fly the Pride flag next month. At its meeting Wednesday, May 12, the Hayward school board will vote on a Pride Month resolution that, if adopted, would require the rainbow flag to be flown at every school in the district throughout June. The Castro Valley Unified School District will also be taking up a similar resolution at its meeting that night.

In San Mateo County officials in Brisbane, Daly City, Half Moon Bay, and Portola Valley have all told the county LGBTQ commission they will be flying some version of the Pride flag next month, according to Beat. Pescadero, a census-designated place in the county, has also told the advisory body it will fly a Pride flag this year.

It is expected that the other cities in the county that flew the flag last year — Brisbane, Colma, Daly City, Foster City, Millbrae, Redwood City, San Bruno, San Carlos, and San Mateo — will do so again this year. And for the first time county LGBTQ leaders are also asking fire departments to fly the Pride flag throughout June.

"We are reaching out to school districts and libraries as we are trying to get as much rainbow out there as possible. We are inviting fire stations that want to to do that as well," said Beat, who told the B.A.R. the idea came up during a debrief the commission members held last July. "We sat down and talked about what would be helpful this year. Part of that was getting other groups and businesses on board."

The idea, explained Beat, stemmed from the belief that having such entities fly a Pride flag would act as visual evidence that there was support in the local communities for elected city officials to follow suit and raise the Pride flag.

"If a city, for whatever reasons, feels uncomfortable raising the flag, they can see the community supports it and is ahead of the game," said Beat.

For some, still a step too far
The idea can still be a step too far for some public officials, who either outright oppose flying the Pride flag or raise unfounded concerns about being sued if they do by other groups that want to see their flag flown over city hall. Such was the case this month in Gilroy, where three of the seven city council members voted May 3 against raising the Pride flag.

Due to it winning majority approval, the Pride flag will be flown for the first time at Gilroy City Hall. While she voted in support of declaring June as Pride Month, City Councilwoman Carol Marques questioned flying the flag in a Facebook post a day after the vote.

Parroting past objections voiced by Bay Area city council members and mayors who objected to flying the Pride flag — only to relent after public outcries — Marques said doing so put the city of Gilroy "on a slippery slope" and had just opened a "can of worms" with its decision.

"I oppose how this group has been treated by others and while I have many friends who fall into this category, I felt we needed to stay neutral and not fly any group's flag at City Hall other than our government flags," she wrote. "Now that the door has been open in flying one group's flag, what happens when the Council is asked again to fly someone else's flag? Could we be sued for saying 'no' because we are not treating every group equally?"

Her comments drew a strong rebuke from BAYMEC, the Bay Area Municipal Elections Committee that works to elect LGBTQ candidates and straight allies in the South Bay. The political group posted a denunciation of Marques' stance on its own Facebook page.

"What should have been a moment of celebration and pride as yet another Bay Area jurisdiction shows its support and solidarity with the LGBTQ+ community turned into a painful reminder of how many tone-deaf and out-of-touch ideas about our community still persist," wrote BAYMEC leaders.

They noted how the visibility of seeing a Pride flag flown by local governments can bring solace to those in the LGBTQ community, particularly seniors and youth, who have felt isolated during the COVID pandemic or continue to grieve the recent killing of trans drag performer Natalia Smüt Lopez, 24, of San Jose.

"Each rainbow flag raised is a quiet but powerful sign of recognition by our local governments that we belong," noted BAYMEC. "It is a symbolic victory over a time when government and those in power turned their backs on the LGBTQ+ community or were complicit in the denial of basic human and civil rights. It is easy to forget those days or those challenges, especially in the glow of so many accomplishments, but it is a history that cannot be forgotten."

As most city councils have learned from their legal counsel, a city merely needs to adopt a flag policy to avoid being sued. In recent years a number of cities have done just that when asked by their LGBTQ residents and community leaders to raise the Pride flag.

The Gilroy Dispatch reported that the Santa Clara County city is expected to adopt such a flag policy soon.

Next door in Morgan Hill, city leaders will once again be flying the Pride flag in not one but three locations around town throughout June.

"This year it will happen for the fifth time now (it's one of my successes dating back to early 2017 — with support by all of my council members back then and every year since then)," noted gay City Councilman Rene Spring in a response to the B.A.R. "Proud of Morgan Hill's welcoming community!"

The San Mateo County LGBTQ Commission, in addition to asking the various cities to livestream their Pride flag raising ceremonies via their official Facebook pages, plans to stream as many of the events as it can on its own Facebook page.