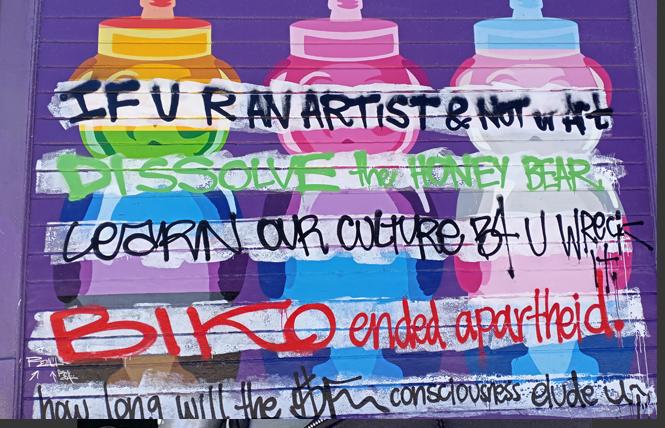 The defaced mural on the side of the San Francisco LGBT Community Center will be replaced by a work by queer Latinx artists, officials told the Bay Area Reporter.

DJ and drag star Juanita MORE!, recently elected empress of the Imperial Council of San Francisco, told the Bay Area Reporter April 29 that the next murals installed on the center's exterior wall are supposed to be changed each year with new artists creating their own unique installation for the high-profile spot.

MORE! declined to disclose the names of the new mural creators since their selection has yet to be officially announced.

"It is time for it to be changed," said MORE!, a local nightlife event producer who for a number of years now has overseen the entertainment at the LGBT center's annual Soiree fundraiser.

Roberto Isaac Ordeñana, the deputy executive director of the center, told the B.A.R. that the two new artists are members of the LGBTQ community.

Last week, the center decided to paint over artist fnnch's honey bear mural on the side of its Octavia Street building after it was defaced with graffiti.

The graffiti came as fnnch, who has painted a plethora of stylized honey bears all over the city — faced criticism over describing himself as an "immigrant" to San Francisco since he hails from the state of Missouri.

The altercation between fnnch and street artist DoggTownDro, which took place in front of the LGBT center mural, was posted to Instagram April 22.

"He speaks in Colonial settler idiom and I don't think he understands the resonant effects these copy and paste bears have on us as natives or the violent effects the gentrification that he's tryna to gussy up here does," DoggTownDro wrote in the post.

Over the next weekend, the mural was vandalized. It was painted over April 27, and subsequently more graffiti showed up.

Fnnch, who is straight, did not respond to a request for comment for this story, but in a statement to KQED-TV, he said he painted the honey bears on the community center to commemorate the 25th anniversary of his uncle's death from AIDS and that he has raised over $20,000 for the center.

"I have been creating Pride art and donating to LGBT charities as long as I've been creating street art, and last year was of particular importance to me as the 25th anniversary of my uncle's death from AIDS," fnnch stated. "We [fnnch and publicist Mark Rhoades] decided that a mural was something people could enjoy in a socially distant fashion, and so he approached the SF LGBT center, asking if we could paint one there. ... I also helped fundraise over $20K for the Center through T-shirt sales, painting donations, and my partnership with [ice cream company] Humphrey Slocombe."

Rhoades, a longtime supporter of the center, told the B.A.R. that the honey bear mural can be a blueprint for future efforts.

"Unfortunately, the defacement of murals throughout San Francisco is a common occurrence and has sadly become part of the urban landscape," Rhoades stated in an email to the B.A.R. "Owing to the success of this partnership, the SF LGBT center will be partnering with other artists. So we look at this experience as a successful way to have celebrated Pride and the SF LGBT center all the while uplifting the community through fnnch's art."

In a public statement, the center distanced itself from fnnch's "immigrant" remark, which he himself apologized for as well.

"Though we believe every artist we work with is entitled to their own opinion, the center does not agree with fnnch's recent comments, and we have shared our concerns about the impact of his comments directly with him" the center posted to Instagram.

When asked why the center did not pick an LGBTQ artist for the mural, Ordeñana told the B.A.R. that fnnch had been the one who, through Rhoades, reached out to them.

"Fnnch shared that part of his motivation for the project was to honor the memory of his uncle who had died from AIDS 25 years ago," stated Ordeñana, who is president of the city's arts commission. "Fnnch also generously offered to maintain the mural for the temporary period that it was up and throughout the year. We accepted his generous offer, and his was the first mural in our ongoing project."

Ordeñana told the B.A.R. that the center "very shortly" will announce the names of the artists installing the new mural and the title for it.

"The artists who will exhibit next are members of the local LGBTQ+ and BIPOC community and the next mural will be unveiled for Pride Month this coming June as intended," he stated. "In 2022 and beyond, we will be holding a public call requesting artists to submit their qualifications and proposals to select from. Our goal is to showcase a variety of perspectives, art and artists representing our diverse community."

New Western Addition mural to debut May 8
Through her own Juanita MORE! San Francisco Mural Project, MORE! has collaborated with artists to create and install six murals around San Francisco since 2019 that feature herself or her French bulldog Jackson, or the pair together. The most recent one was created in 2020 by gay artist Blake Cedric and adorned the boarded up frontage of the GLBT Historical Society Museum. MORE! and her canine companion were featured along with three other LGBTQ community leaders.

Her latest mural, created in collaboration with artist Simon Malvaez, is set to debut May 8 at a private property fronting Alamo Square, a city park across the street from the famous row of Victorian houses known as the Painted Ladies. Over the years different artwork has been displayed on the chain link fencing that surrounds the empty lot on Steiner Street in the Western Addition neighborhood.

The artwork will be used for her Pride party poster, which MORE! is reviving this year. Held annually as a fundraiser for a local LGBTQ nonprofit, MORE! canceled the 2020 party due to the COVID pandemic. So far MORE! is staying mum about the details of where and when her Pride bash will be held.

"It is still a secret location," MORE! told the B.A.R.

She is also working with District 3 Supervisor Aaron Peskin and his office on securing a location somewhere in the city's northern most supervisorial district, where she has lived for three decades, to install her eighth mural.

Sister Roma of the Sisters of Perpetual Indulgence joked with the B.A.R. that she was "tired" of seeing the honey bears all over town and was looking forward to seeing the new mural go up at the LGBT center. Her comment was made in jest since fnnch in early April debuted a honey bear mural paying homage to the drag nun philanthropic group on the exterior of South of Market gay bar the Powerhouse. Coincidentally, the Folsom Street venue is where MORE! has long hosted her monthly Powerblouse party.

"I am all for street art graffiti. Number one because street art speaks to the people," said Roma. "Whether it features a honey bear or Juanita MORE!, I love it. I am excited to see what comes next at the LGBT center."

New mural going up on Powerhouse wall
Sign up!