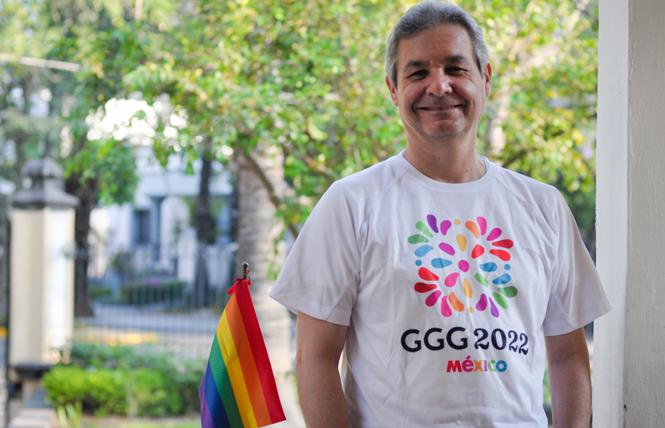 As a proud Guadalajara native, or Tapatío as we refer to ourselves locally, I spend my days waxing poetic about all our beautiful city has to offer visitors. Guadalajara has an enviable heritage as the birthplace of tequila, mariachi, and charrería — Mexico's national sport. But there is another defining aspect of the city that is just as important — our long-standing position as one of the most welcoming destinations in the world for LGBTQ+ visitors.

Tapatíos, including those with generations of roots in the region as well as new international arrivals, are the type of people who celebrate individuality and welcome change. This collective mindset is just one reason why international chefs, artists, and entrepreneurs have migrated here to introduce innovative fusions of their craft. The eclectic, creative energy is palatable across all areas of the city, including our large LGBTQ+ community. Our leaders are committed to fostering this spirit and ensuring that our LGBTQ+ community continues to thrive. As part of these efforts, the state of Jalisco (of which Guadalajara is the capital) named its first sexual diversity director, Andrés Treviño Luna, who guides the state on LGBTQ+ goals and issues. The Guadalajara Tourism Board has furthered this cause as a member of the International Gay and Lesbian Tourism Association, and by participating in nationally recognized certification programs that serve LGBTQ+ visitors.

Holding true to Mexican tradition, Guadalajara is known for its warm, welcoming hospitality, so we are not the type of people to keep the magic of our city to ourselves. It is an honor to share Guadalajara with the many travelers we welcome from around the world each year, and we hope to see even more if selected to host Gay Games XII in 2026.

We are honored that Guadalajara has been named a finalist to host the Gay Games along with Munich, Germany and Valencia, Spain. It's a city of inclusivity with a beautiful contrast of tradition and modernity that athletes, spectators, and others attending the Gay Games can thoroughly enjoy. LGBTQ+ athletes of all ages, athletic experience, sexual orientation, gender identity, physical challenges, and health status will participate in more than 35 sports at this prestigious event. San Francisco hosted the first two editions of the Gay Games in 1982 and 1986, setting the example for future host cities.

Hosting large-scale events for the LGBTQ+ community is right up our alley. We revel in them. Every June, we host one of the largest Pride celebrations in Latin America, which regularly attracts more than 100,000 revelers. These visitors come to celebrate their individuality among a rainbow spectrum of travelers as they enjoy a vibrant parade and entertainment, rallies, and more.

Visitors attending Guadalajara Pride have the chance to witness the intersection of heritage and our contemporary culture through our diverse mariachi musicians. Mariachi is on UNESCO's Intangible Cultural Heritage list, dating back to the early 1900s when it kept to conservative traditions for many years. However, today, there has been an evolution of the genre that embraces mariachi of all sexual orientations, including members of all-female and LGBTQ+ mariachi bands. They play their music, an ode to their heritage, proudly and can be seen not just at Pride, but at Guadalajara's International Mariachi Festival held every September. This festival is a mecca for mariachi with more than 500 participants from around the globe. The best of the best play alongside those who simply love music in a grand parade. Other festivals of note include Guadalajara's International Book Fair, the world's second largest book fair that highlights an LGBTQ+ literature section, and the city's International Film Festival, Latin America's most prestigious film festival which features the "Premio Maguey Award" for the best of LGBTQ+ cinema.

There is plenty to do in Guadalajara, even when a festival isn't taking place. When Gay Games athletes have completed their events and are ready to relax, they will have myriad nightlife options. Guadalajara has the most LGBTQ+ bars and nightclubs of any city in Mexico, with more than 50 LGBTQ+ businesses. (Be sure not to miss Tacos Gay for late-night cravings.) The Chapultepec and Zona Centro neighborhoods offer the best of the best when it comes to lounges, dance clubs, and popular drag shows. For those who prefer quieter downtime, there are UNESCO World Heritage Sites to be explored including the Museo Cabañas, which features floor-to-ceiling murals by famed José Clemente Orozco; the sweeping blue agave fields and distilleries that produce the world's tequila; and the Guachimontones, one of the few circular pyramid sites in the world that offer a quiet, spiritual place to be.

As a city, Guadalajara truly reflects the Gay Games' core principles of "Participation, Inclusion and Personal Best," and we hope to have the opportunity to bear witness to the joy and spirit of the Gay Games athletes together. However, no matter the outcome of the bid, we would be honored to welcome you to our city at any time and hope to see you soon.

Gustavo Staufert is the director of the Guadalajara Tourism Board.

Jock Talk: Selection race is on for Gay Games 2026
Sign up!