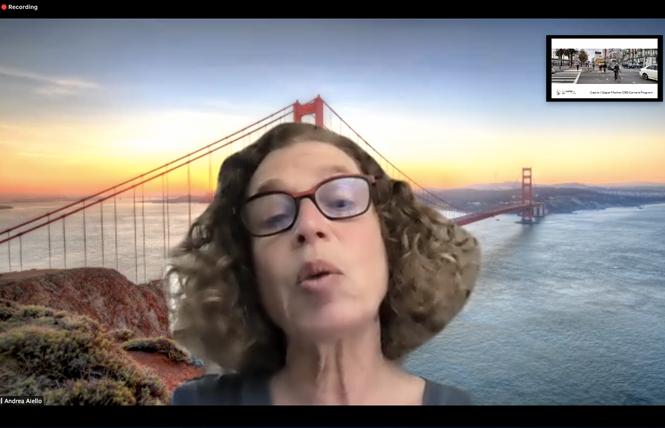 A two-hour town hall about a proposal to place 125 security cameras in San Francisco's Castro district yielded no clear consensus April 27 — except, that is, that there will be more discussions going forward.

The meeting was hosted by the Castro/Upper Market Community Benefit District, which was going to vote last year on accepting some $695,000 from tech mogul Chris Larsen to pay for the security camera network. Larsen has funded CBDs to install cameras around San Francisco, as the New York Times reported in July 2020, in such neighborhoods as Fisherman's Wharf, Lower Polk, Mid-Market, Tenderloin, Union Square, and Japantown.

However, the Harvey Milk LGBTQ Democratic Club successfully pressured the Castro CBD to delay the installation of the cameras in order to gather more community feedback. The Castro LGBTQ Cultural District had also expressed its own "grave concern" about the plan at the time.

That community feedback included an online survey and the town hall (originally scheduled for February, but for which the April 27 date was eventually settled upon) before the CBD was to move forward with the plan.

The issue has split the city's LGBTQ community, with some advocates voicing alarm at people visiting the Castro being surveilled in such a way, especially if individuals are not out of the closet. Others fear they will be used by law enforcement against queer people of color and transgender individuals, two groups historically targeted by the police for petty crimes.

Complicating matters, a lawsuit was filed against the city last year by the American Civil Liberties Union alleging police illegally conducted mass surveillance on the Black Lives Matter protests that erupted in the late spring by commandeering private security cameras in the Union Square area.

The two sides began to square off before the town hall even got underway. The Alice B. Toklas LGBTQ Democratic Club joined the Milk club in expressing its opposition, calling the camera plan "dangerous."

Then, in emails shared with the B.A.R. ahead of the meeting, Milk club leaders assailed the Castro CBD leadership for not alerting them directly about it or inviting them to participate. In their email to Castro CBD Executive Director Andrea Aiello, the Milk club alleged the CBD deemed the political group as not "from the Castro," while noting that Aiello herself does not reside in the neighborhood. (She lives in Pacifica.)

The Milk club demanded that the Castro CBD take no action on the installation of the security cameras until the two community groups can discuss the matter "in an agreed-upon setting mediated by a neutral third party." It also informed the CBD that it would not take part in the town hall and criticized the wording of the survey about the cameras.

By the time the town hall began, the cultural district — which was to present a camera-skeptical case — had pulled out from its planned presentation.

"We withdrew because our requests to include others on this panel and not be the sole voice of opposition were declined," Stephen Torres, who sits on the cultural district's advisory board, wrote to the B.A.R. over Zoom chat. "We asked to include other members of our coalition (Milk club, United to Save the Mission, [and] a privacy expert either from [Electronic Frontier Foundation] or ACLU or Media Justice)?."

The program at the town hall (about 50 minutes of the two hours) then got underway as a largely pro-camera affair, which elicited backlash from some of the 80-odd participants in the Zoom meeting, who said in the chatbox and after the program of presenters that they felt they were being sold on the idea of cameras, rather than witnessing a debate on whether cameras would be a good idea.

"I don't think there's a consensus at all," Jason Wyman, a San Francisco resident at the meeting, said when it was his time to speak. "You need to go to square one and have a conversation about policing in the Castro, engaging in gay history and trans history. ... It is incumbent upon you to make sure you do good communication."

Lee Hepner, who noted he wears several hats around the city, including as a legislative aide for Supervisor Aaron Peskin, but was speaking in his role on the Milk club board, said he felt "quite a bit of frustration."

"The poll you put out was very skewed," Hepner said. "If this was a good faith collaboration, community partners would be involved from day one. That includes the Milk club, and as a member I resent the idea the Milk club is not from the Castro. We are not on a good path. I look forward to more engagement, but I think some trust has to be rebuilt with the community if we are ever going to find a path forward."

Aiello took that point about community engagement, and said she will be speaking with Hepner and others more going forward.

"Lee and I have been texting, over email, today and have been talking about a meeting between different organizations," Aiello said. "I think that's probably the next step, and at that meeting we will iron out the next steps from here."

Steven Bracco, who is on the cultural district's board but also has covered the camera proposal for Hoodline, asked why Larsen was not at the meeting.

A representative for Larsen did not respond to a B.A.R. request for comment by press time.

'Cameras ... just show what happened'
At the beginning of the meeting, Aiello introduced a program of presenters by speaking about the proposal and noting that there are already hundreds of cameras in the CBD's footprint.

"To be perfectly honest, having a camera program allows a program like this to be community driven," Aiello said. "There are 224 separate cameras — with multiple views — that have no policies and no procedures. People can do whatever they want, or not do anything with it. This allows one voice for the community, so we can work together with community leaders."

Aiello said that only one person would be able to access the video, who would judge law enforcement requests in accordance with pre-set policies. Videos would only be released "on a case-by-case basis, for investigatory use only" for crimes reported to the San Francisco Police Department. Videos would only be retained for 30 days, focus only on public space, and there would be an annual audit to ensure compliance with the policies, Aiello said.

"There will be no live monitoring of video, no audio/video recording, and no facial recognition," Aiello said.

Aiello and others stressed that videos can exonerate people of crimes they did not commit.

"Sometimes eyewitness testimony is not as accurate as people would hope," Aiello said. "Cameras, really, just show what happened."

Randall Scott, the executive director of the Fisherman's Wharf Community Benefit District, said there are 40 cameras in his district, which has a less restrictive policy than the one being proposed for Castro.