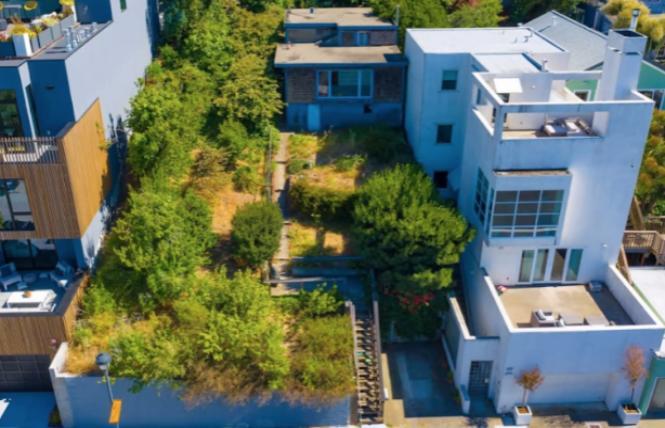 The home of late lesbian pioneers Del Martin and Phyllis Lyon, center, was supported for landmarking by a San Francisco Board of Supervisors committee April 26. Photo: Screengrab via Zoom

The supervisors' land use and transportation committee unanimously voted 3-0 to recommend that the full board landmark the couple's 651 Duncan Street residence when it meets May 4. It is set to become the first city landmark honoring lesbian history.

"I knew them both and adored them," said District 3 Supervisor Aaron Peskin. "I have been to their house many, many times. Thank you to everybody involved in landmarking it. Yeah, it's awesome."

As Christina Morris, senior field director of the Los Angeles Office of the National Trust for Historic Preservation, argued in a guest editorial the Bay Area Reporter posted online April 23, "The Board of Supervisors should embrace this opportunity to correct decades of oversight and inequity by approving the Lyon-Martin House as a San Francisco landmark of women's history and LGBTQIA+ civil rights activism."

Preservation groups and LGBTQ historians initially had sought to see the entire Duncan Street property become a city landmark. They had argued that the adjoining garden plot to the cottage where the women lived should also be included in the landmark because the couple's cremains were interred and scattered on the undeveloped portion. The city's planning department had also recommended the entire property be landmarked.

But Paul McKeown and his wife, Meredith Jones-McKeown, who bought the property last summer for $2.25 million, argued for the landmark only to include the residence with an address of 651 Duncan Street. They expressed concerns that landmarking the vacant parcel with an address of 649 Duncan Street would hamper their ability to build a new home on it for them and their two young daughters.

The city's Historic Preservation Commission on a 6-1 vote in February sided with the family and recommended that just the cottage parcel become the city's fifth landmark specifically related to LGBTQ history. Not only will it be the first focused solely on lesbian history, it will also be the first LGBTQ landmark located in a solely residential area.

Gay District 8 Supervisor Rafael Mandelman, who instigated the landmark process at the urging of the community, decided to follow the advice of the preservation advisory body and seek city landmark status for only 651 Duncan Street. He has also indicated he is open to renaming a city open space nearby the property in honor of the women.

At Monday's hearing, Mandelman called Lyon and Martin "giants of the early LGBTQ rights movement" whose home "should be appropriately recognized and preserved" as a key site of LGBTQ history. With it being Lesbian Visibility Day, he noted, "there was no better time to take this step."

Terry Beswick, executive director of the GLBT Historical Society, which holds Lyon and Martin's papers in its archives, has been helping to push forward the landmark and involved in the talks about the home's future.

"We can not overstate the cultural and historical significance of the house," he told the supervisors.

Shayne Watson, a lesbian and architectural historian, co-wrote a 2015 survey of San Francisco's LGBTQ cultural heritage that had recommended the couple's home become a city landmark. She noted it would be the first landmark in the Western United States "to recognize and affirm, simply put, lesbian love."

The new property owners not only support recognizing the Lyon-Martin House for its historical importance to LGBTQ history but also have pledged to preserve it. They have been meeting with local preservationists and LGBTQ community leaders about the future usage of the home and ways to document the structure for posterity.

The nonprofit CyArk, which works to document historic properties, is in talks with the Friends of the Lyon-Martin House about using drones to take footage of the existing structure, both its exterior and interior, as well as recording interviews with people inside the home talking about its historical significance.

The homeowners have not ruled out the idea of selling it at some point to a preservation group. One idea that has been floated is to use it for an artist or activist in residence program, since it is situated in a location that makes it likely impossible to open it to the public as a museum. At the hearing Monday Jones-McKeown thanked city leaders for moving forward with the request to landmark only the 651 Duncan Street property.