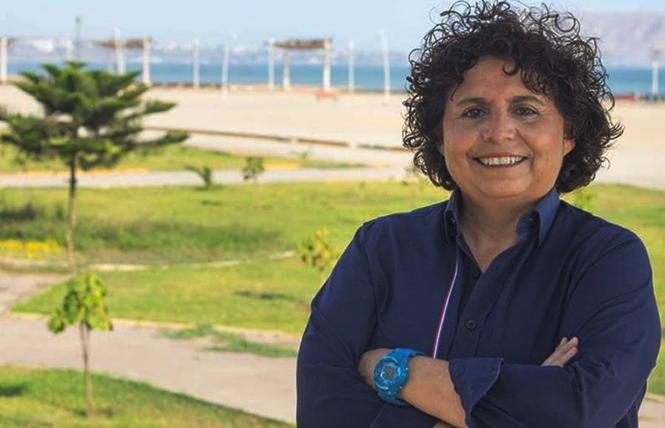 Susel Paredes, 57, became Peru's only currently openly LGBTQ lawmaker April 18. On Sunday, she received the most votes of any female candidate, reported Reuters.

Meanwhile, Luisa Revilla Urcia, 49, tested positive for the coronavirus, which causes COVID-19, two weeks ago and was admitted to a Trujillo hospital, according to reports in the Washington Blade. She died April 15. The transgender politician and activist was elected to the La Esperanza local council in 2014. La Esperanza is a city adjacent to Trujillo.

She left office in 2018 and remains the country's only openly transgender woman to hold public office in the country. Revilla founded Casa Trans La Libertad, an organization that supported the local transgender community, according to a Facebook post on her page by her longtime friend and fellow transgender activist Miluska Luzquinos, reported the Blade.

"We are living in very difficult times my dear sister," wrote Luzquinos in her Facebook post. "What a great pain and a loss for Peru's trans movement. You leave behind an important legacy."

Peru is experiencing some challenging times.

Sunday's presidential election ended in a runoff race between socialist candidate Pedro Castillo and right-wing candidate Keiko Fujimori. Neither candidate is a friend of the LGBTQ community.

Castillo has expressed opposition to legalizing same-sex marriage. Fujimori has stated she is against same-sex unions and adoption. Peru is one of the few South American countries that has not legalized marriage equality.

Fujimori is the daughter of imprisoned former President Alberto Fujimori, who was convicted of human rights crimes and corruption in 2009.

Paredes, a lawyer specializing in LGBTQ and women's rights, expressed she was cautious about any LGBTQ gains after Sunday's election.

"We're in the middle of a crossfire between right-wing and left-wing fundamentalists," Paredes, a member of the centrist Morado Party, told Reuters. "If either of them is elected, it will be a problem for us LGBT+ people."

Paredes said she believes in "litigation beyond the walls of the Congress."

Paredes won her first court case to have her own 2017 U.S. marriage to her lawyer wife recognized in Peru.

There are few, if any, protections for Peruvian LGBTQ people. No same-sex marriage, gender recognition, anti-discrimination, or ban on conversion therapy.

Paredes believes the country should have a quota system to guarantee jobs for transgender people. She also called for tougher penalties for hate crimes committed related to sexual orientation and gender identity, reported Reuters.

On April 15, the advocate general, who operates similarly to an attorney general in the United States and provides independent counsel to the court, issued an opinion against Bulgaria in the case of V.M.A. v. Stolichna obshtina.

Last year, Bulgarian-born Kalina Ivanova filed a lawsuit in an administrative court in Sofia, the country's capital, after her application to obtain a birth certificate and citizenship for her daughter was denied. The reason was Bulgaria does not recognize same-sex marriage or children born to same-sex parents in other European countries.

Ivanova's wife, Jane Jones, was born in Gibraltar. The family is using pseudonyms to protect their privacy. The binational couple's 1-year-old daughter was born in Spain.

Spain and Bulgaria are both member states of the E.U. Gibraltar, a narrow peninsula of Spain's south coast, is a British Overseas Territory.

Spain legally could not recognize the child because neither parent was a citizen of the country. The United Kingdom's laws reserved granting citizenship of children of binational heterosexual couples, not same-sex couples, barring Jones from passing her citizenship to the couple's daughter. Furthermore, the U.K. is no longer a part of the E.U.

Ivanova's case was a last-ditch effort for the family to keep their daughter from becoming stateless.

The couple was supported by Bulgarian LGBTQ legal advocacy organization Deytsvie, which was co-founded by their attorney, Denitsa Lyubenova. Lyubenova was joined by ILGA-Europe's head of litigation, Arpi Avetisyan, who argued the case before the court in February. The agency is part of the International Lesbian, Gay, Bisexual, Trans, and Intersex Association.

Bulgaria ranks 24 out of 27 countries on the ILGA-Europe's Rainbow Europe ranking index. The country does not legally recognize same-sex marriage or civil unions or queer families. It remains socially hostile to LGBTQ people, despite having laws that protect LGBTQ people. At one time it was one of the leading European countries advancing LGBTQ rights.

Bulgarian courts punted the case to the European court but that strategy does not appear to have worked. Bulgaria violated the E.U.'s fundamental principles by refusing to issue a birth certificate or grant citizenship to a child of two mothers, the advocate general's opinion stated.

Furthermore, Bulgaria violated parentage of the second mother under Spain's family relationship laws and the E.U.'s right to freedom of movement for Jones to move freely with the couple's child.

The E.U. law did not "alter the concept of parentage or marriage under Bulgarian family law" and therefore did not threaten Bulgarian national expression or identity," the advocate general wrote in the opinion.

Eleni Maravelia, president of the Network of LGBTIQ* Families Associations, was "very pleased" with the advocate general's opinion.

The advocate general gave a "clear answer to Bulgaria and all E.U. member states that E.U. law has to be respected at all times when dealing with cross-border issues, even when it comes to rainbow families with children who might not be covered by the national legislation," Maravelia stated in ILGA's April 16 news release responding to the opinion.

"We are hoping the final decision by the court will take under consideration the advocate general opinion and build on it so to include the protection of the rights of the child," she added.

The advocate general's opinion is good news for LGBTQ families.

Polish mothers Kashka and Sinead have a similar case before the E.U. court. They are another lesbian couple living in Spain with their daughter who was born there and are fighting to obtain a Polish birth certificate and citizenship for their child.

Poland has made headlines for its crackdown on its LGBTQ community during and after a hate-filled anti-gay presidential campaign last year that spread homophobic rhetoric and saw towns turned into so-called LGBT-free zones.

"We are still awaiting the ruling of the Court of Justice of the European Union, but we believe that the advocate general's opinion is a step forward recognizing same-sex families across Europe," stated Lyubenova.

"A ruling in the direction set by the advocate general will bind Bulgaria to establish the family relationship between the child Sara and her two mothers. Maybe it all starts now," she added.

A date has not been set by the court to hear the case.

Out in the World: Bulgarian lesbian moms' court case nears decision
Sign up!