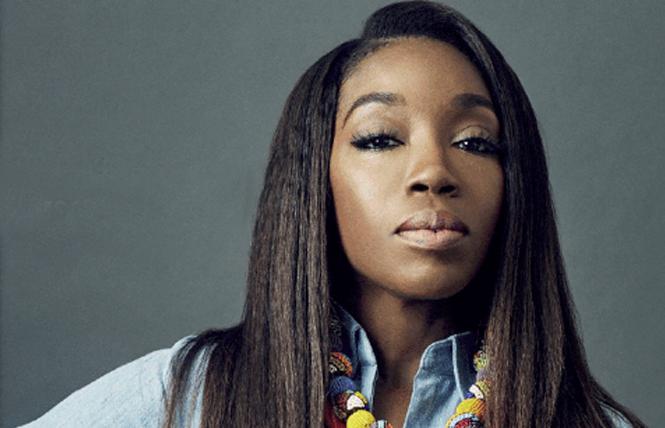 Headlining the show will be Grammy Award-winning R&B, hip-hop, and soul singer-songwriter Estelle. Other entertainers include Peppermint, Justin Tranter, and Jake Wesley Rogers.

California's junior senator, Alex Padilla (D) and Congresswoman Barbara Lee (D-Oakland) will be special guests. Lee, vice chair and founding member of Congress' LGBTQ+ Equality Caucus, is a longtime ally of the queer community and has authored many bills around HIV/AIDS and other progressive issues.

Ryan Mitchell will host the evening.

EQCA stated that participation in the event is free and open to all but it asks that attendees consider making a donation to help the organization continue its work. To RSVP, click here.

According to a news release, SFAF clinicians recommend regular STI and HIV testing every three months for those who are sexually active.

Since the beginning of the COVID-19 shelter-in-place mandate, the total number of HIV and STI testing visits at Magnet, the foundation's clinic at Strut, dropped by half, the release stated. New PrEP enrollments have also declined by 50%, and the number of active PrEP clients has dropped by about 25%.

"We know that with COVID-19 rates going down, increased access to COVID-19 vaccines, and the reopening of businesses in many areas, more people in the community feel a lot safer in meeting up [and] having sex with new partners," stated Reina Hernandez, manager of PrEP and HIV benefits and navigation. "We see 'vaccinated' and 'vax4vax' front and center on people's Grindr and other online dating profiles, referring to the COVID-19 vaccine. Without invoking fear tactics or shame, we want to remind people that it's a good time to come in and talk to us about your sexual health, about HIV and STIs and PrEP."

SFAF launched a new online awareness campaign April 12 to coincide with STD Awareness Week and will include graphics on social media and ads on hookup apps.

Gay basketball group cancels tourney in Memphis
The National Gay Basketball Association announced that it has canceled its national tournament and other associated events originally planned for June 18-21 in Memphis, Tennessee as part of Tri-State Black Pride's slate of programming.

According to a news release, NGBA canceled its events because of the Tennessee Legislature's passage of Senate Bill 228, an anti-transgender student athlete bill.

"We stand in solidarity with the trans community, and refuse to financially reward a state government that supports exclusionary laws and antiquated practices with hard-earned tourism dollars," stated Mark Chambers, NGBA founder and president.

In 2007, Memphis hosted the second NGBA Fall Classic, welcoming 12 LGBTQ teams from across the U.S. Since then, NGBA has witnessed a large increase in event participation with tournaments now averaging more than 30 teams, stimulating the local economies of tournament-hosting cities by an average of $110,000 over the three-day event, the release noted.

Tri State Black Pride stated it was disappointed in the basketball group's decision, "but stands in full support of the decision to stand against inequalities of trans athletes," president Davin Clemons stated.

Tri State Black Pride is produced by the Cathedral Foundation.

The Monica Roberts LGBTQ+ Task Force Scholarship is a fund to support Black LGBTQ+ students studying journalism, mass communications, or otherwise interested in reporting and storytelling. According to a news release, it was conceived by task force co-chairs Tre'vell Anderson and Femi Redwood, and was unanimously approved by NABJ's board of directors.

Roberts, a Black transgender woman who wrote the TransGriot blog, died October 5 at her home in Houston. She used her blog to cover the trans community at a time when these stories were often overlooked by mainstream outlets. She was also a longtime member of NABJ. Unapologetic in her life and work, Roberts inspired generations of Black queer journalists while also serving as a possibility model to trans and nonbinary professionals, the release stated.

"When our industry finally stops misgendering trans folks and hyperfocusing on our traumas, we'll be able to trace such a promised land to the efforts of Monica Roberts," Anderson stated.

The fund is now accepting donations for the scholarship. To make a contribution, go to https://nabjonline.org/, then click on donate. Under "Where would you like to direct your support," select "scholarships," then select "LGBTQ+ Task Force Scholarship."

Updated, 4/21/21: This article has been updated with a new date for EQCA's virtual event and the addition of a special guest.