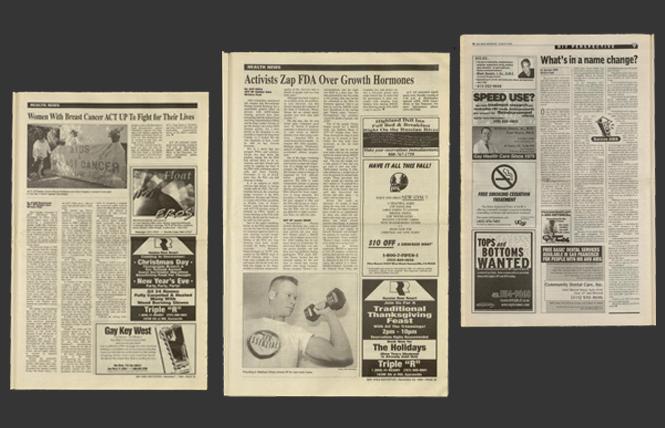 The Bay Area Reporter front page on September 20, 1990 announced that the San Francisco chapter of the AIDS Coalition To Unleash Power, or ACT UP, had split into two groups. Longtime AIDS activist Michael Wright announced the first meeting of the new group, ACT UP/Golden Gate, and stated the split was the result of huge attendances at ACT UP/San Francisco meetings (300-plus people) after publicity surrounding ACT UP actions at the July 1990 International AIDS Conference that took place in San Francisco.

ACT UP/Golden Gate took shape as an organization specifically focused on empowering individual patients to access the immediate needs of people with HIV, including housing, financial assistance, but most specifically access to medical treatments for HIV disease and opportunistic infections, and for experimental treatments for breast cancer. The Writers Pool was established at a meeting between then-B.A.R. editor Michael Salinas and activist Jeff Getty in 1994 and was conceived as a vehicle for AIDS activists to act as both advocates and journalists for people with HIV. The column was to appear weekly, organized and edited by ACT UP/Golden Gate members and initially coordinated by Getty. (Salinas died in 2003; Getty died in 2006.)

The first column appeared in the B.A.R. on November 23, 1994 titled "Activists Zap FDA Over Growth Hormones." That column characterized much of the writer/activist synergy that energized the undertaking for the next eight years. The article described the activist campaign to get human growth hormone to patients suffering from HIV-related wasting syndrome and described activist actions to fax and call the federal Food and Drug Administration and the drug's maker, Serono, to reverse policies that limited early access. The article included a photo of activist Matt Sharp, who had received early access to human growth hormone, showing off increased healthy muscle mass due to the treatment.

The first byline read "Jeff Getty, ACT UP Golden Gate Writers Pool." That identifier, "ACT UP/Golden Gate Writers Pool" (later changed to Survive AIDS) would appear nearly every week in the B.A.R. from 1994 to 2002 at the top of nearly 300 columns by more than 20 different non-journalist community-based writers. The column gave a voice and visibility to many patients and activists fighting to survive HIV disease.

From the start, the focus of the column was action and science around treatments and prevention. In December 1994, G'dali Braverman wrote about and promoted a direct action campaign led by ACT UP/Golden Gate breast cancer activist Gracia Buffleben to force South San Francisco biotech company Genentech to provide compassionate access of a HER-2 antibody to help patients with breast cancer. Also that month, Getty filled the role of writer, person with AIDS or PWA, AIDS activist, and eventually experimental subject when he broke the news that doctors at UCSF were hoping to perform the first animal to human (xenogenic) transplant to treat AIDS by transplanting immune system stem cells from a baboon (which is genetically immune from HIV) to a human with hopes of controlling the disease. Getty later became the first person to receive such a transplant in June 1995. While the transplantation was not successful, Getty's health improved dramatically, possibly as a result of immune system ablation followed by highly active anti-retroviral therapy (HAART) as Getty's immune system regenerated.

The Writers Pool sometimes broke news. In the December 29, 1994 issue, Getty and Sharp bylined a front-page piece announcing early access approval of human growth hormone to treat wasting in PWAs. The Writers Pool had previously written about research and activism regarding the drug, which proved far more effective than other strategies for treating deadly wasting syndrome. Pool writer Bill Thorne had led an activist effort starting in 1993 to shepherd clinical trial participation and the necessary drug applications and FDA approvals to get access to the drug.

"The ACT UP/Golden Gate Writers Pool was part of the activist struggle to have access to cutting edge treatment information and relay that back to the community," said Michael Lauro, now living in Connecticut. "Authoring the columns gave activists credibility with, and access to, people in power who could positively affect the lives of those living with HIV. During its run, it was a weekly example of the ACT UP credo of direct action by people with AIDS and other patients to empower themselves to survive."

Rob Sabados wrote a number of articles covering technical and scientific aspects of HIV drug interactions that arose with the new protease inhibitors. This author wrote a column advocating for using the most aggressive PI therapies available, rather than holding some drugs in reserve.

Even after protease inhibitors became available, information about opportunistic infections was life or death for many living with HIV. An April 8, 1998 article introduced readers to Dr. Dawn McGuire, an early advocate of using the drug topotecan. The article led to patient inquiries and consults from around the U.S. and world seeking information about the little reported but devastating condition known as progressive multifocal leukoencephalopathy (PML), an aggressive viral disease that affected the brains of people with advanced AIDS.

The ACT UP/Golden Gate Writers Pool continued to cover HIV treatment and prevention issues, as well as access to care, housing, vaccine research, issues faced by women with HIV, and accountability of HIV nonprofit organizations throughout the 1990s.

Save the liver
One campaign that continued for many years after HAART was equitable and unprejudiced access to liver transplantation for patients who needed it. Getty first wrote about an HIV-positive man dying after denial of a liver transplant in late 1997. The campaign for equitable transplantation continued over many years. Larry Kramer, founder of the ACT UP movement, eventually received a liver transplant on December 21, 2001 and substantially outlived many transplant recipients, surviving until May 27, 2020. Kramer repeatedly credited ACT UP/Golden Gate and Getty's work in removing barriers for HIV+ people who otherwise qualified for needing transplants.

Denying the denialists
In 1995, ACT UP/San Francisco reemerged from years of little activity to gradually become primarily associated with AIDS denialism and began a six-year campaign of targeted harassment and sometimes violence against non-denialist AIDS activists and others. The ACT UP/Golden Gate Writers Pool repeatedly took on HIV-denialists and called on the San Francisco Police Department, city officials, and the district attorney's office to vigorously prosecute those who used criminal harassment and violence against people with HIV. As the mainstream media's fascination and coverage of the denialists continued, ACT UP/Golden Gate and the Writers Pool changed their name to Survive AIDS, with the first column under that name appearing March 23, 2000.

The Writers Pool continued to cover a wide range of treatment and activist issues regarding HIV disease and associated side effects, but a fair amount of ink flowed to fight back against criminal denialist tactics. Lauro addressed the legal issues regarding the ultimate jailing of two individuals associated with making threats.

The final Survive AIDS Writers Pool column appeared August 22, 2002 and covered new research and information from the XIV AIDS Conference in Barcelona. In the eight-year life of the Writer's Pool, AIDS for many in the developed world, and even for some in the developing world, had become a survivable disease. While sadly a number of activists who volunteered their time to the Writers Pool have since passed away, from HIV disease and other causes, more survived and went back to full-time jobs and other life pursuits. Survive AIDS ceased meetings in late 2002, and the archives of the B.A.R. Writers Pool remain the most complete internet-accessible record of the work and, in some cases, lives of this particular group of AIDS fighters.

Stephen LeBlanc was a member of ACT UP/Golden Gate and was coordinator of the Writers Pool for several years.

AIDS activism by the book: 'Let the Record Show' captures a movement's rise and decline
Sign up!