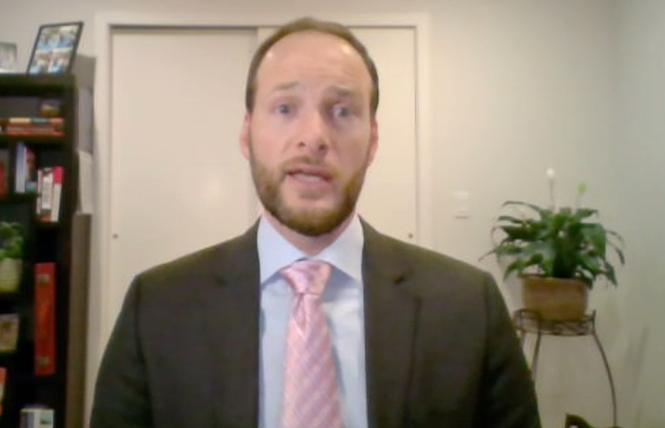 With a renewed push in California to enact progressive reforms of the criminal justice system, advocates and elected leaders are once again highlighting the need to decriminalize sex work.

Gay state Senator Scott Wiener (D-San Francisco) recently introduced Senate Bill 357, which would repeal statutes that criminalize loitering with the intent to engage in sex work. At a panel hosted by the San Francisco Sex-Positive Democratic Club, advocates drew attention to why the bill is needed.

Celestina Pearl, the outreach director for St. James Infirmary, one of the six organizations co-sponsoring the bill, told panelists and attendees during the March 18 forum that the San Francisco nonprofit is working with Wiener to pass SB 357 this year. It mirrors a similar bill New York State lawmakers adopted.

"It's basically the bill New York just passed," Pearl said. "They were calling it the 'walking while trans bill' and we haven't come up with our own title yet, but we are working with Senator Wiener's office."

"New York has led the way, and shown that it's far past time we end this discriminatory targeting of suspected sex workers," Wiener stated in a news release. "We're experiencing a terrifying epidemic of violence against trans women of color, and we need to be proactive in improving their safety. Our laws should protect the LGBTQ community and communities of color, and not criminalize sex workers, trans people and Brown and Black people for quite literally walking around or dressing in a certain way."

"This law can be broadly interpreted, and thus allows for discriminatory application against the LGBTQ community and people of color," the release from Wiener's office states. "Because current law regarding loitering is highly subjective and vague, law enforcement officers disproportionately profile and target Black and Brown transgender women by stopping and arresting people for discriminatory and inappropriate reasons.

"This is how Black and Brown transgender women get arrested and cited for quite simply walking on the street," the release states. "It also gives law enforcement the ability to more easily target and arrest sex workers."

Tony Montoya, a gay man who is the president of the San Francisco Police Officers Association, did not respond to a request for comment.

The American Civil Liberties Union of Northern California is also a co-sponsor of the legislation.

"California's loitering law gives law enforcement a weapon to discriminate against and harass Black and trans sex workers simply for existing in public," stated Arneta Rogers, the director of the gender, sexuality and reproductive justice program at the ACLU of Northern California. "We are proud to partner with the strong coalition of current and former sex workers to repeal this harmful law."

Cesar, whose last name was not given, is currently a sex worker and a co-lead of the mutual aid and fundraising team of the Decrim Sex Work CA Coalition. Cesar stated that sex workers face physical danger and intimidation because of statutes against the practice.

"Sex workers are necessity-based entrepreneurs that should be protected and not dehumanized by laws criminalizing the entire industry," Cesar stated. "Some clients weaponize the criminalization of sex work by using threats of calling the police to exploit or harm sex workers by agreeing to a verbal contract for service and getting this service without paying for service. Why is it illegal to sell something that is legal to give away?"

This is not Wiener's first bill addressing sex work laws.

In 2019, Governor Gavin Newsom signed into law Wiener's SB 233, which took effect last year. The law protects sex workers from arrest for misdemeanor crimes after they report a felony, and disallows the possession of condoms to be used by police as probable cause for an arrest, or as evidence of sex work in court.

One fan of that idea is San Francisco District Attorney Chesa Boudin, who spoke for about 25 minutes at the outset of the panel discussion.

"I'm a big believer in the decriminalization of sex work, which I think will help us become safer in concrete ways" Boudin said.

"It is not a priority for my office to prosecute," Boudin said. "It's not something I would ever prosecute, except under the most extraordinary circumstances, if it is consensual between adults."

Boudin said that the state law that prohibits sex work, California Penal Code Section 647(b), does not make a distinction between sellers and purchasers, which he said made it arduous to research the amount and context of the sex work-related cases brought before San Francisco courts last year.

Nonetheless, Boudin said that his staff was able to determine that in 2020, "11 cases appeared on the court calendar. They looked like new cases, but I was relieved to see these 11 cases were on the calendar not because they were new but because of actions taken by my office and the public defender to expunge and seal old arrests."

Boudin said that "research ... shows us there are positive public health and public safety outcomes when law enforcement is prohibited from intervening" in sex work.

From 2003 to 2009, indoor sex work was judicially decriminalized in Rhode Island. Boudin said that during that time, there was a 31% decline in reported rapes and a decline in the number of gonorrhea cases.

"Criminalization of sex work is actually one of the main barriers toward solving violent crimes," Boudin said, adding that while sex workers are disproportionately victims of violent crimes, they are often reluctant to come forward due to the fear of being criminally charged. Further, many sex workers didn't carry condoms for fear prophylactics could be used as evidence against them.

"In San Francisco, several years ago and by agreement of all law enforcement agencies, we stopped using condoms as evidence, even when the DA's office was still prosecuting," Boudin said. "I don't control the [San Francisco Police Department], but I can tell you that the police department is well aware our office doesn't prosecute sex workers."

In a statement, SFPD spokesman Sergeant Michael Andraychak wrote, "Yes, the department and the DA are on the same page when it comes to not prosecuting sex work except under the most extraordinary circumstances."

The Bay Area Reporter reported extensively on the condom issue and the SFPD bulletin, which was released by former police chief Greg Suhr in 2012.

Panelist Maggie McNeill, a sex worker, author, blogger, and expert on sex work policy, wanted to impress upon the attendees the importance of the district attorney's stance.

"I want to stress to viewers how important this policy you're talking about is," McNeill said. "Something of 60% of prostitution charges nationwide come from sex workers who are the victims of — or in the neighborhood of — a crime. She gets assaulted, reports it, and is arrested for prostitution. I want to stress: this is a really important policy and I applaud your office for doing that."

Becca Motola-Barnes, the vice president of internal communications for the Sex-Positive Democrats, thanked Boudin for showing up.

"That was really wonderful," she said. "I'm glad we got some of the DA's time."

McNeill explained the distinction through an analogy to the restaurant business. If an eatery violates a health code, she said, a health officer might write a citation.

"What he does not do is come in the restaurant by surprise, trick the restaurant owner, beat them up, and bring in a bunch of cops," McNeill said. "Decriminalization is something more like a restaurant, which is covered by a civil code and not a criminal one. It's not enforced by the cops, it's enforced by a health inspector."

Cathy Reisenwitz, a writer, activist, and sex worker focused on destigmitization, said that this approach is flawed.

"You're never going to end demand," Reisenwitz said. "You can only make it uncomfortable."

"The problem with 'go after the pimps' is that there's no definition of 'pimp.' It's anyone in the vicinity of a sex worker who a cop decides to charge as a pimp," McNeill said.

In response to a question about which way of decriminalization would be best, McNeill said that many sexual and reproductive freedoms now protected by law in the United States came from the Supreme Court. But she fears that a Supreme Court ruling would face more backlash than rulings that decriminalized gay sex.

"I see it as more like Roe v. Wade than Lawrence v. Texas," McNeill said, referring to two landmark decisions that legalized abortion and gay sex, respectively. "After Lawrence, support for the criminalization of homosexual relations really evaporated. As we all know — Roe v. Wade — they've been trying to recriminalize by sneaky ways ever since."

The panel took place two days after a series of mass shootings at massage parlors in the Atlanta area killed eight people, six of whom were women of Asian descent. McNeill connected anti-sex work laws to xenophobia, particularly against Chinese people.

Indeed, the ban on Chinese women entering the U.S. became law seven years before the Chinese Exclusion Act of 1882 banned men as well, until World War II led to a slight opening in Chinese immigration.

For now, Pearl said that people should stay tuned for further developments about SB 357.

"Pay attention," she said. "Look out for it. It's still early in the process so there's not really anything to be done yet."

Reisenwitz said that once stigma is lifted, more and more people will realize they, too, know people affected by sex-work criminalization.

"You know a lot more sex workers than you think, no matter who you are," she said. "We have a culture where men are more embarrassed about paying for sex than having sex with women who are too drunk to consent. That's fucked."