Out in the World: Uzbek LGBTQ ally brutally attacked 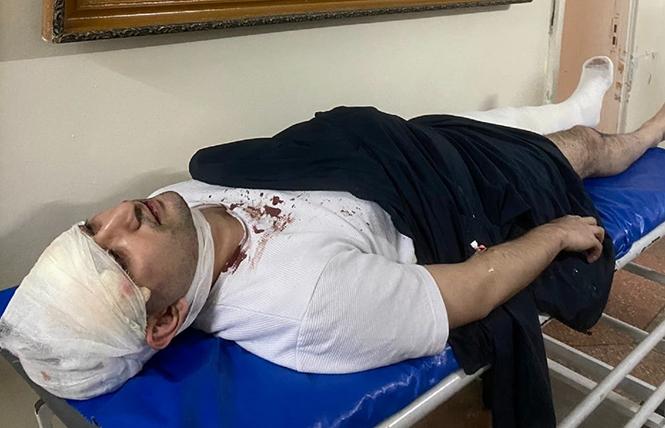 Uzbek activist and LGBTQ ally Miraziz Bazarov is shown on a hospital bed after being severely beaten outside his home in Tashkent March 28 Photo: Courtesy Pink News

The blogger, an ally to the LGBTQ community, was hospitalized with serious injuries according to doctors at Tashkent Traumatology Hospital, where he was admitted Sunday night local time.

Reports stated that Bazarov will be transferred to another hospital and may need to undergo brain surgery.

Bazarov, 29, was attacked near his apartment in Tashkent, the capital city of Uzbekistan. He was on his way home from the weekly Japanese anime and Korean pop music event he hosts on Sundays, reported Radio Free Europe/Radio Liberty.

Bazarov is well known for openly criticizing Uzbek President Shavkat Mirziyoyev and the government. He has called for decriminalization of homosexuality in Uzbekistan on his Telegram channel and Facebook.

Bazarov has publicly stated he is not an LGBTQ activist, but he believes that being gay is a personal issue and therefore no laws should consider it a crime, reported RFE/RL.

Prior to the attack, Bazarov told the media outlet he had received many online threats in recent weeks. He reported the threats to the police, who took no action.

One of Bazarov's neighbors witnessed the attack, stating it only took three minutes for the three masked men, one of whom had a baseball bat, to severely assault the activist.

Doctors told reporters that Bazarov sustained multiple injuries to his internal organs and legs. The injuries included an open fracture of his left leg and a concussion.

Human rights groups, journalism organizations, and international government diplomats condemned the assault and called for the government to investigate.

U.S. Ambassador to Uzbekistan Daniel Rosenblum called the assault "disturbing" in a March 29 tweet, and urged the Uzbekistan government to investigate "in support of the LGBTI community."

The attack came a week after Human Rights Watch released a report about the abuses Uzbek gay men face in the country. It was a member of the Soviet Union until its fall in 1991.

Gay sex has been criminalized in Article 120 of Uzbekistan's penal code, a Soviet-era carryover, since 1994. Individuals charged under the law face up to three years in prison.

The draft of the country's new criminal code still retains the law in its new clause, Article 154, with the wording unchanged as of the February 22 rendition, according to HRW's brief published March 23.

The anti-gay law does not include same-sex relations between women.

Turkmenistan is reconsidering its law, according to HRW. Uzbekistan is a current member of the U.N. Human Rights Council, which called for the country to repeal the anti-gay law during a 2020 committee review of the country.

The country's government representative said that the "lifestyle [of LGBTQ people] was not approved by Islam and was not in keeping with the Uzbek mindset," reported HRW.

There are no laws protecting LGBTQ Uzbeks.

Hugh Williamson, director of the Europe and Central Asia division at HRW, said in the brief that abuse linked to Article 120 "has placed gay and bisexual men in Uzbekistan in a deeply vulnerable and marginalized position, leaving them with almost no protection from harassment by police and others."

"Uzbekistan should definitively turn a page from its abusive past and remove this rights-violating and outdated provision from its new Criminal Code," Williamson said.

Nine anonymous Uzbek gay activists interviewed by HRW reported that because of the law, "they faced arbitrary arrests, threats, extortion, psychological pressure, and physical attacks by both police and non-state actors for being gay."

Videos and other material gathered by the organization corroborated the men's stories. The report echoes one in 2020 by the Eurasian Coalition on Health, Rights, Gender and Sexual Diversity that examined Uzbekistan LGBTQ issues. The gay men reported that they do not report anti-gay attacks due to fear of being outed, bullied, or insulted by authorities.

"Because of the violence and discrimination that LGBT people are subjected to, we had to stop most of [our] projects, news feeds or groups online," one activist told HRW. "We've gone completely underground."

To read the report, visit www.hrw.org/news/2021/03/23/uzbekistan-gay-men-face-abuse-prison

LGBTQs continue to be killed by Myanmar's military
It was another violent weekend in Myanmar as authorities and the military executed more than 100 demonstrators in the streets of the Southeast Asian country March 27, marking the bloodiest day since the coup began two months ago.

Burmese Army General Min Aung Hlaing and his generals celebrated Armed Forces Day, commemorating the military's resistance to Japanese occupation in 1945, with a lavish party that night, reported the BBC.

"An awful lot of people have been killed totally unnecessarily," he said.

An estimated 12 LGBTQ activists are among at least 459 people killed by security forces since the beginning of the coup February 1, according to Equality Myanmar and the Assistance Association for Political Prisoners, respectively.

"The military demand to hold the power as long as they could by using the worst form of violence against the peaceful demonstrators," Aung Myo Min, 53, gay director of Equality Myanmar, told the Bay Area Reporter over Signal, a private messaging app, March 28.

Myanmar's democratically elected leaders, including Nobel Prize laureate and democracy and human rights leader Daw Aung San Suu Kyi, 75, who spent 15 years under house arrest until she was elected state counsellor in 2016, was removed from office February 1. She was reelected in November 2020.

Daw Aung San Suu Kyi's reputation was tarnished by not speaking out against the military's brutal ethnic cleansing of the Rohingya, the predominantly Muslim Indo-Aryan ethnic group that has been ongoing since 2017.

The country, once known as Burma, was renamed by the military to Myanmar in 1989.

"The people of Burma have voiced their aspirations for a return to democratic governance, peace, and rule of law. The U.S., together with our allies and partners, has stood with them," Secretary of State Antony Blinken said in a March 22 department statement.

The U.S., E.U., U.K., and Canada March 22 issued a second round of sanctions against Burmese coup leaders and perpetrators of violence. That was followed two days later by the introduction of a resolution to expand monitoring and reporting at the 46th session of the United Nations Human Rights Council.

International leaders are keeping tabs on the number of dead. Equality Myanmar is also keeping track of the number of LGBTQ people who are being killed fighting for democracy in the country that only had it for a decade.

"Words of condemnation or concern are frankly ringing hollow to the people of Myanmar while the military junta commits mass murder against them," U.N. Special Rapporteur Tom Andrews said in a statement from the U.N. Human Rights Office of the High Commissioner March 25.

"[We] need international pressures to provide all kinds of assistance to the democratic movement and to not recognize and to not provide any means [of] support of the military," said Aung Myo Min.

Since the beginning of the coup, thousands of Burmese people have taken to the streets raising their hands in the three-finger salute adopted from the popular novel and movie series, "The Hunger Games," in protest against the coup.

"People in the country from all walks of class, particularly, the young people are very brave to fight, even unarmed and peaceful, against the indiscriminate shooters of the military," said Aung Myo Min, stating their strategies are to continue taking to the streets in protest despite the violence against them and for a "continuous civil disobedience movement."

LGBTQ demonstrators have been seen at the front of the marches, waving rainbow flags and donning drag.

Recognizing the unequal firepower to resist the military, a familiar movement is taking place. Some student protesters, much like the freedom fighters of the late 1980s, are fleeing to Myanmar's jungles to join a resistance army, reported the New York Times.

Taking up arms in resistance against Myanmar's military is not unfamiliar to Aung Myo Min. As a student demonstrator fighting for democracy 30 years ago, he too joined the resistance army in Myanmar's jungles.

Others are taking to the networks, hacking their way to democracy and waging an information war taking down military-linked banks, reported the Times.

"The peoples are very determined also to fight to win," said Aung Myo Min, who lived in exile in Thailand for nearly 25 years before returning to Myanmar in 2015. "They do not want to be living as a slave under the military rules, so they regularly sacrifice their lives to topple down the military dictatorship and bring democracy back to the country."

Aung Myo Min credits decades of human rights work and empowerment of LGBTQ people and Burmese people overall that is now in action in Myanmar.