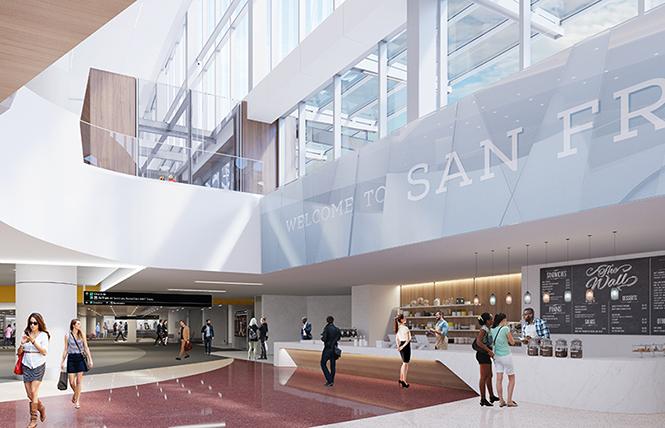 According to a news release, Fitwel is a building rating system that provides guidelines on how to design, construct, and operate healthier buildings. In the Retail v2.1 category, SFO and the design-build team of Hensel Phelps, A Gensler/Kuth Ranieri Joint Venture won the design award for the Terminal 1 Center project, part of the $2.4 billion Harvey Milk Terminal 1 Redevelopment Program.

"Harvey Milk Terminal 1 was designed with the health of both our passengers and employees in mind," airport director Ivar C. Satero stated in a March 25 news release. "Achieving Fitwel certification for this terminal — a first in the world — helped us to establish a new benchmark for the airport experience."

SFO has seen passenger traffic plummet during the pandemic. The Milk terminal opened last April when JetBlue became the first airline to move its baggage claim and ticket counter there. Southwest Airlines followed soon after.

Travelers can also see the permanent exhibition honoring the late gay supervisor. Located in Harvey Milk Terminal 1's Central Inglenook is an intimate space featuring 43 images from various stages of Milk's life, including his childhood in New York and his days as a pioneering politician in San Francisco during the 1970s. The exhibit, titled "Harvey Milk: Messenger of Hope," utilizes photos submitted by the public and from the archives of the GLBT Historical Society and the James C. Hormel LGBTQIA Center at the San Francisco Public Library.

San Francisco officials opted to name the domestic terminal in honor of Milk, the first LGBTQ person elected to public office in the city and state only to be killed 11 months into his first term in November 1978, after a proposal to rename the entire airport on behalf of the gay icon was rejected. It is the first airport facility in the world named after an LGBTQ leader.

Fast Company, the business media brand, recently named SFO on its list of Most Innovative Companies for 2021, the release stated. In the "travel" category, SFO was honored for the healthy, human-centric design of the Milk terminal.

Easter dinners to-go
Tenderloin Tessie Holiday Dinners is back for Easter. The all-volunteer nonprofit will provide free dinners to those in need Sunday, April 4, from 1 to 4 p.m. at First Unitarian Church, 1187 Franklin Street, at Geary Boulevard.

Michael Gagne, the organization's board president, stated that people will receive to-go meals consisting of lasagna, garlic bread, salad, and pie. There will be vegan, vegetarian, and meat options. There will be some outdoor seating and entertainment by Vanessa Bousay.

Some of the Sisters of Perpetual Indulgence will lend a hand, serving cookies and coffee to those waiting in line, Gagne stated.

"We also are handing out free clothing, gift bags, and PPE stuff," he added.

Castro rally against AAPI hate
There will be another rally against Asian American and Pacific Islander hate in San Francisco's Castro district Saturday, April 3, at 1 p.m. at Jane Warner Plaza at Market and Castro streets.

Organized by the Prism Foundation (formerly the GAPA Foundation), people will gather for a rally to speak out against the violence plaguing the country.

The GLBTQ+ Asian Pacific Alliance held a similar rally March 21, following the tragic shootings in the Atlanta area that left eight people dead, including six Asian women. Other violent incidents have occurred in the Bay Area.

"Our community has repeatedly been subjected to anti-Asian rhetoric and brutality toward our elderly," a statement from the Prism Foundation's board read. "However, recent events, including the premeditated murders in Atlanta, make it evidently clear the refusal to recognize the atrocities for what they are — hate and racism. These events perpetuate the model minority myth that anti-Asian racism isn't real. We must make it plainly clear: the hate and violence on the API community must stop. Our community will be seen and heard."

The suspect in the Atlanta area shootings, Robert Aaron Long, has been charged with eight counts of murder, though authorities have not charged him with hate crimes.

Organizers said that attendees should adhere to social distancing guidelines. Masks will be provided for those who do not have access to them.

Forum on queer life after COVID
Horizons Foundation will present a virtual panel "Resilience and Rebuilding: The Bay Area LGBTQ Future After COVID" Wednesday, April 7, from 5 to 6:15 p.m.

Speakers will include nonprofit leaders from the queer front lines, Horizons noted in its announcement. They will include Kiku Johnson, executive director of the Rainbow Community Center in Concord; Aria Sa'id, executive director of the Transgender District; and Lance Toma, CEO of the San Francisco Community Health Center. Olga Talamante, board chair emerita of Horizons, will moderate.

Panelists will discuss how COVID has impacted the communities they serve, how LGBTQ nonprofits have responded to the crisis, and how the community can begin to rebuild.

The event is free. To register, go to https://bit.ly/2PlAglj

Sa'id added that the campaign goes beyond the observance of Trans Day of Visibility, which was March 31.

To learn more, go to https://www.knowourplace.com/

"Part of our mission is to give back to the community. So investing in our youth members, who are tomorrow's leaders, is important to us," Jonathan Oliver, president and CEO of the credit union, stated in a news release.

The youth scholarship program was established to assist students who are members of San Francisco Federal Credit Union who plan to continue education in college or vocational school programs. Since its inception in 2007, the credit union has awarded nearly $140,000 in scholarship money.

Scholarship recipients are selected on the basis of academic record, demonstrated leadership, participation in school, community activities, honors, work experience, and a statement of goals and aspirations. As part of the application process, students will be asked to complete an essay. Financial need is not considered.

The deadline to apply is May 28.

For more information and to apply, visit https://www.sanfranciscofcu.com/2021-youth-scholarship