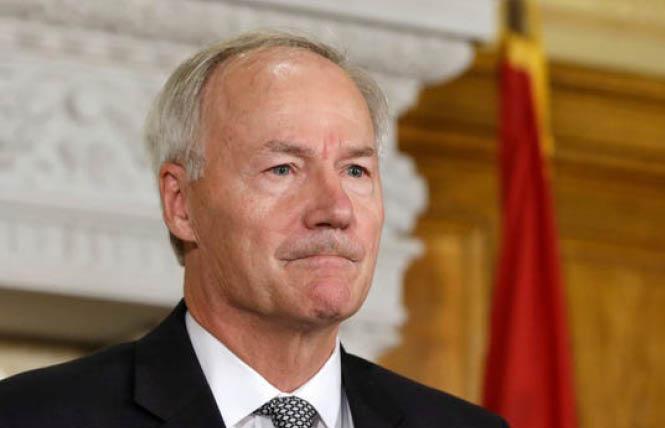 Arkansas Governor Asa Hutchinson signed an anti-trans bill into law March 25, which will lead to the state being added to California's "no-fly" list for publicly-funded travel. Photo: AP

Nearly a year after Idaho adopted anti-transgender legislation, landing the Gem State on both San Francisco's and California's banned travel lists for their employees, Arkansas now faces the same ignominious fate for its attack on the rights of its female transgender youth athletes. It will become the 13th state to land on the "no-fly" list kept by California officials.

"Governor Hutchinson's eagerness to sign this discriminatory legislation is an affront not just to the transgender kids it is bound to hurt but to all Arkansans who will be impacted by its consequences," stated Human Rights Campaign President Alphonso David. "Hutchinson is ignoring the ugly history of states that have dared to pass anti-transgender legislation in years past, and by doing so he is exposing Arkansas to economic harm, expensive taxpayer-funded legal battles, and a tarnished reputation."

The Natural State legislation is one of myriad such bills being taken up by Republican-controlled statehouses across the country this legislative session. Earlier this month Mississippi Governor Tate Reeves signed into law similar legislation as the one Hutchinson signed today.

After an uproar over such a bill in South Dakota, and concerns Amazon would abandon a distribution facility it planned to build there, Governor Kristi Noem (R) made the surprise decision to partially veto it earlier this month. Noem limited the ban to applying only to elementary and high school sports, not collegiate athletics, upsetting Republican lawmakers and antigay groups that had backed the legislation.

In Utah, another such ban against trans female youth athletes died in the state Senate this year after Governor Spencer Cox (R) signaled he would veto it. Another proposed bill banning trans youth from accessing gender-affirming medical care also died in the Utah Legislature, which already has wrapped up its 2021 session, due to Cox signaling it didn't have his support.

The GOP leader's lack of support for the bills ensured the Beehive State stayed off the no-fly lists kept by both San Francisco and California leaders that include those states that have passed anti-LGBTQ laws in recent years. Mississippi and South Dakota both landed on the lists in 2017.

Once Arkansas' law takes effect, it will be added to the state of California's list by the office of the state attorney general, which oversees the list. Depending on the timing, it could be one of the first actions taken by Rob Bonta, currently a Democratic Assemblyman from Oakland who was named this week by Governor Gavin Newsom as the state's next attorney general. Bonta's appointment needs to be confirmed by the Legislature.

Because San Francisco also bans its employees from using taxpayer funds to travel to states with abortion restrictions, Arkansas has been on the banned travel list overseen by the city administrator's office since January 1, 2020. The city now bans its staffers from traveling on the public dime to nearly half the country, as there are currently 24 states on its list.

San Francisco bans travel to states that have adopted anti-LGBTQ laws since 2015. It not only restricts taxpayer-funded travel but also prohibits city agencies from contracting with businesses based in those states.

In terms of the states on the city's list for having anti-LGBTQ laws, they mirror the states that are on the list kept by the state of California. The Golden State's list now stands at 12 states.