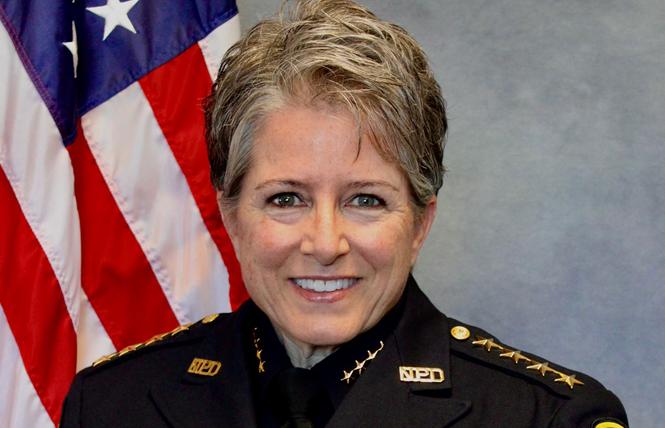 Sylvia Moir has settled into her role as the first woman and first LGBTQ person to serve as Napa's chief of police.

The 55-year-old is serving on an interim basis for the six to seven months it will take to search for a new permanent chief. The prior chief, Robert Plummer, resigned at the start of this year, citing a desire to be closer to his family in Nevada.

Moir began her post February 22. She started her law enforcement career in 1988 in Sacramento.

"Originally, I was compelled to safeguard people. Being a police officer is a defining and unique identity — a calling to step in, to safeguard people, and to provide a unique service in our society," Moir, a lesbian, recently told the Bay Area Reporter. "When [city manager] Steve Potter contacted me to ask if I'd consider serving as interim police chief, they explored and examined me to see if I'd be a good fit, offered me the job, and I started last week and dove right in."

Potter expressed his confidence in Moir in a news release.

"Throughout the assessment process, Sylvia Moir demonstrated that she is a knowledgeable, passionate, and dynamic public servant that is ready to assist our community," Potter stated. "We are confident that Moir will help push forward Napa Police Department's commitment to integrity and professionalism as well as provide stable leadership while we work through this transitional period."

After her time in Sacramento, Moir served as chief of the El Cerrito Police Department from 2010 to 2016. She said it was during that time she realized she could serve as a role model and a bridge as LGBTQ people became more accepted.

"That gave me a shift in terms of recognizing my identity. I was asked to be part of the inclusion council," Moir said.

When asked what has changed most for LGBTQ officers in the last decades, Moir said there has been an effort to be more inclusive.

Moir subsequently became the police chief in Tempe, Arizona, from which she left in October 2020.

She is now living in Napa, at least for the time being.

"I am here, full-time and delighted to be right here in downtown Napa serving the community," she said. "My commitment is to be here for the amount of time it takes to do the evaluation — I can't imagine that will take longer than fall — and turn it over to the right person to do the work so necessary," Moir said.

Moir, who now oversees a department with a $33 million budget, said she will not seek to become permanent chief.

"I do believe there are some talented individuals who should be considered for the full-time position," she said.

As an interim chief, Moir indicated she does not want to institute a broad vision of change in the department by herself, but wants to point those under her command to "evidence-based practices" that will reduce crime and increase public trust.

She said at the end of her tenure she wants to be able to provide "a thorough briefing of what I've seen from the seat I currently occupy, the strategies of policing I've observed, and be a guide and a mentor for whoever is selected."

Anne Sutkowi-Hemstreet, a queer woman who is the director of the Rainbow Action Network, told the B.A.R. that she made a public comment to the Napa City Council in February stating that she is "concerned that [Moir] is not as progressive as our community needs to steer our police department towards making serious reform, including reallocating resources to prevention and mental health services."

Sutkowi-Hemstreet stated to the City Council at that time that while she "immediately reacted with enthusiasm" to Moir's appointment, the fact that Moir resigned her Tempe position after the city started seeking changes to its police department last year is a red flag.

(The city did not give a reason for Moir's departure, according to the Arizona Republic. Moir would not comment to the Republic, but in an email announcing her departure, Moir wrote that conversations with the city management led to her resignation, the Republic reported.)

"It is unclear to me, based on my internet research, whether she truly believes that the law enforcement system needs serious reform or not. I believe it does," Sutkowi-Hemstreet stated. "I am choosing to reserve some hope — based on the relationships I have developed with Napa's city leaders over the last couple years — that she will prioritize engaging in the necessary conversations and steps to take the Napa Police Department toward serious reform."

Sutkowi-Hemstreet told the B.A.R. that she hopes the police department can "go to the community members that don't trust them (for very good reasons) — Black, Indigenous, Latinx, other people of color, immigrant, and LGBTQ — and actually listen to them. Really listen."

Further, she said that relations between the LGBTQ community and the police department are strained to the point where LGBTQs don't feel safe reporting crimes.

"I have heard of multiple stories of recent LGBTQ hate crimes in Napa, including physical violence, property damage, and Zoom-bombing with offensive homophobic language, that go unreported because LGBTQ people don't trust our police department," she wrote in an email. "It is hard for me to say if this is because they worry how they will be treated by the police officers or they just assume nothing will come from reporting it or if they just want to forget a traumatic thing that happened to them."

Moir, told of these concerns about lack of trust in LGBTQ and other communities, said that "community policing" and "procedural justice" are the ways to increase community trust.

"It comes down to community policing, not as a program but as a way of doing business: problem solving, relationship building and organizational transformation," she said in a follow-up interview. "That, with procedural justice, which has four pillars: fairness, impartiality, giving voice and transparency.

Moir said the department is "engaged ... in a specific targeted and approved diversity, equity and inclusion training."

Regarding the reallocation of resources, Moir said that that's not optimal for now but is something that lawmakers should work toward.

The city of Napa is currently in the process of "evaluating and readdressing strategies in view of what services we do provide [and] who are the right folks," Moir said.

Moir said she'd love to get in touch with Sutkowi-Hemstreet to discuss further.

Moir hopes her tenure will expand what women and LGBTQ people feel is possible for them.

"Being a woman in a masculine-dominated world of policing, and being a member of the LGBTQ community, may show some young folks out there opportunities that — prior to my being here — they may not have identified," she said.

Fairfield's out police chief settles into the role
Sign up!