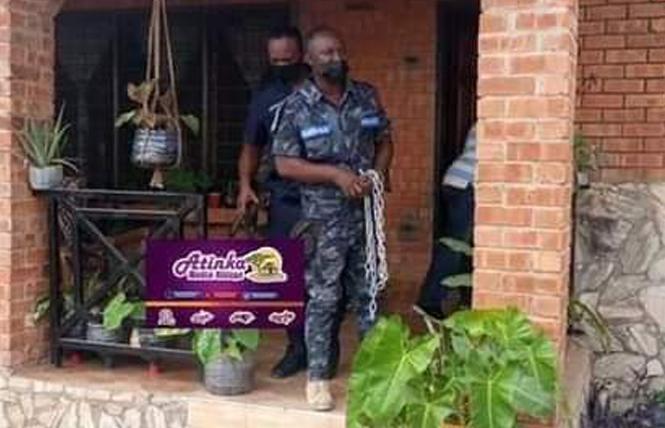 LGBTQ Ghanaians are raising funds and garnering support after political leaders have issued a barrage of anti-gay attacks in local media.

The tipping point for Ghana's LGBTQ movement came at the end of February, when police raided a newly opened LGBTQ center.

Since then, conservative religious and political leaders then launched an ongoing homophobic media blitz against Ghana's queer community.

On February 27, days after the center was shut down, Ghanaian President Nana Akufo-Addo pledged that same-sex marriage would not happen during his presidency.

Some politicians are proposing to criminalize LGBTQ people and any promotion of homosexuality.

The anti-gay propaganda has created a dangerous environment for anyone who appears to be LGBTQ, Abdul-Wadud Mohammed, communications director at LGBT+ Rights Ghana, which operates the center, told the Bay Area Reporter in a phone interview from a secret location March 15.

Mohammed does not believe the anti-gay rhetoric and attacks will cease.

"I don't think that it is going to die down anytime soon because this is the first time LGBTQ issues are being publicly spoken about nationwide," Abdul-Wadud Mohammed said, noting that conversations about people's "displeasure in relation with LGBTQ" are being held daily.

Gay sex is illegal in Ghana. The former British colony retained the colonial-era law when it became independent in 1957 and joined the Commonwealth.

Ghana is famous for being where the first British ship carrying African slaves to Jamestown, Virginia left from a port city in the Gulf of Guinea in 1619. The country celebrated the 400th anniversary of that moment with the Year of Return, a campaign that encouraged African Americans to reclaim their roots by traveling to the West African country in 2019.

Section 104(1)(b) of its Criminal Offenses Act is another relic of that era. The law criminalizes sexual acts between two men as "unnatural carnal knowledge." Those charged under the law can face up to three years in prison for consensual sex, and up to 25 years for non-consensual sex.

Until recently, the law was rarely enforced, according to LGBTQ community leaders and human rights reports.

Queer women are not included in the law, but nonetheless are harassed and are violently attacked and subjected to so-called corrective rape.

Human Rights Watch and the African Centre For International Law and Accountability documented the dire situation for Ghana's LGBTQ community in 2018.

ACILA found that about 60% of Ghanaians do not believe LGBTQ people deserve equal treatment and 80% expressed being uncomfortable associating themselves with LGBTQ people.

A majority of Ghanaians support discrimination and violence against LGBTQ people, while 36% believe LGBTQ Ghanaians should be discriminated against in jobs searches and public appointments, according to the report. About 13% of Ghanaians admitted they were willing to inflict physical or verbal abuse on an LGBTQI person or force them to hide their identity.

ACILA surveyed 1,200 participants from five different regions in the country.

Not too long ago, Ghana's LGBTQ community lived relatively freely in the country.

Abdul-Wadud Mohammed explained the community had public places to socialize that were known to be gathering places for LGBTQ people and "nobody cared."

That was until the National Coalition for Proper Human Sexual Rights and Family Values, funded by United States-based anti-gay World Congress of Families, was established in 2013.

The coalition of religious organizations led by attorney Moses Foh-Amoaning, who serves as its executive secretary, began a media campaign openly attacking the country's LGBTQ community.

"After the coalition came in, they started pushing their whole homophobic rhetoric in the media," Abdul-Wadud Mohammad said, adding, "their actions made Ghanaians more conscious of the hate that they have for the community."

A reporter for Essence magazine and Open Democracy went undercover to the 2019 World Congress of Families Conference in the capital city of Accra, which confirmed the organization's ongoing anti-gay and anti-women's campaign in Ghana and Africa.

Abdul-Wadud Mohammad believes the uptick in anti-gay violence is due to the community becoming more visible and demanding its rights within the last decade.

"The LGBTQ movement in Ghana is growing visibly. We are now up and strong enough to demand for our rights," Abdul-Wadud Mohammad said.

Fighting back
The coalition's attacks and attempts to introduce anti-gay legislation in Ghana's Parliament left no other choice for LGBTQ activists but to mobilize.

"We believe that if we do not fight back, they are going to do more harm," Abdul-Wadud Mohammad said.

"Our rights are being infringed on every day," he continued, stating that the organization is exploring taking legal action against Ghana for infringing on their rights by raiding the center. "We didn't break any laws."

Police raided the center, located at the Ashongman Estate on the outskirts of Accra, February 24 due to public outcry.

Images of European Union officials attending the January 31 opening ceremony and fundraiser circulated on social media and brought the center to the public's attention.

The center, funded and operated by LGBT+ Rights Ghana, was providing support to Ghana's LGBTQ community from a temporary shelter and workspace.

"They have been getting their support [from the World Congress of Families] for years now," he said.

Leading up to the raid, the activists limited programs and time at the center and took precautions to protect members' information.

The center was empty at the time of the raid, Abdul-Wadud Mohammad said.

The morning of the raid, Abdul-Wadud Mohammed secretly watched from afar, taking photos of the police as they investigated the building and premises with the owner of the house, Daniel Asenso-Gyambibi.

Asenso-Gyambibi told local media that he was not aware the house was being used as an LGBTQ center.

"We didn't lie to him, he just didn't ask," Abdul-Wadud Mohammed said. "He didn't do his due diligence, I would say."

Removal of member files did not stop anti-gay activists and members of the local media from locating photos of LGBT+ Rights Ghana's key organizers and publishing them, effectively outing several members.

Five of the organization's members, including Abdul-Wadud Mohammed, have gone into hiding.

Their employers fired them, and their families have kicked them out, due to the situation, Abdul-Wadud Mohammed said.

The queer activists are not deterred by the circumstances. Since the raid, they have worked to protect LGBTQ Ghanaians and advocate for themselves.

"The actions of Ghanaians have been nothing but very brutal toward the community," said Mohammed. "The community is not safe at all at this moment."

The activists petitioned Akufo-Addo for their basic rights on March 6, Ghana's Independence Day, contacted the U.S. Embassy and other international governments for help, and have engaged in dialogue with local police about the raid.

Abdul-Wadud Mohammad has not heard back from the U.S. Embassy.

An unidentified spokesperson for the embassy told the B.A.R. March 12 in a written statement that it is "monitoring the situation closely."

The embassy called for respect for all Ghanaians and for "political and religious leaders, as well as civil society, to refrain from inflammatory statements that can lead to human rights abuses," the statement said.

The bill
A looming threat is the potential for a proposed bill that would criminalize homosexuality and promotion of LGBTQ rights in Ghana.

Anti-gay Member of Parliament Samuel Nartey George is currently working with seven other lawmakers to propose a private members' bill to be passed before the parliamentary session ends March 31, reported Reuters.

Shehu Usman Mohammad wrote that George's claiming threats by Ghana's gay community to unseat him by funding his challenger in a future parliamentarian election was "one of his usual attention-seeking acts" and that it is "born out of mischief and a plain lie."

It "must be ignored," Shehu Usman Mohammad wrote.

LGBTQ activists are working to come up with a plan to attempt to block the bill before it gets to parliament, said Abdul-Wadud Mohammed of LGBT+ Rights Ghana.

"It does concern me, actually a lot," said Abdul-Wadud Mohammed. "If this bill is put in place, we are going to have multiples of whatever we are going through right now.

"The Ghanaian public are very, very violent people," he added, noting the violent attacks currently happening against the community.

He fears legal criminalization of LGBTQ Ghanaians will only spur more attacks.

"There is going to be a lot of chaos in the country where LGBTQ people will be gravely abused," he said, predicting possibilities if the bill becomes law. "I'm pretty sure there will be a number of deaths that will happen during that time."

MP Mahama Ayariga is the only one who publicly supported Ghana's LGBTQ community and spoke out against the center's closure during a debate about the issue on the floor March 3.

"You cannot stop people from advocating for something to be recognized by the law," Ayariga told his fellow 275 MPs.

George immediately attacked Ayariga in the media as a warning to any other MP who might be supportive of Ghana's LGBTQ community.

LGBTQ activists have welcomed the support they've garnered from local and international human rights organizations, such as Amnesty International and Pan Africa International Lesbian, Gay, Bisexual, Trans and Intersex Association, and Ghanaian celebrities in the diaspora.

Nate Brown, the executive director of Pan Africa ILGA, in a March 1 statement responding to the raid on the center called the government and religious leaders' actions "catalysts of violence and discrimination" rather than protecting citizens "disturbing."

"Ghana has just proved that we are still a long way to go," he said.

Local organizations mobilized stepping in to provide services to LGBTQ Ghanaians in need while the center continues to operate virtually, Abdul-Wadud Mohammed said.

British-Ghanaian actor Idris Elba, British Vogue editor-in-chief Edward Enninful, and supermodel Naomi Campbell, who is not of Ghanaian descent, condemned the country's treatment of its LGBTQ community. They signed onto a letter of support for Ghana's LGBTQ community along with 67 other celebrities, politicians, and influential people.

"To our Ghanaian LGBTQIA+ family: We see you and we hear you. We are in awe of your strength, your bravery and your audacity to be true to who you are even when it is dangerous to do so," the letter read.

The celebrities pledged ongoing support for the community and urged the country's leaders to work with LGBTQ Ghanaian activists.

"You are loved, you are important, and you deserve a safe place to gather in your shared experience," the letter said.

The activists launched a capital campaign to purchase land to build a center and a hashtag effort #GhanaSupportsEquality, #GhanaGetsBetter, #QueerGhanianLivesMatter to spread awareness.

The Go Fund Me capital campaign was launched with the help of San Francisco gay art therapist John Hanig.

Hanig did not respond to a request for an interview.

The activists want the support and pressure on Ghana's government to keep coming.

Out in the World: Queers rally in Oakland against Ghana's proposed anti-gay bill
Sign up!