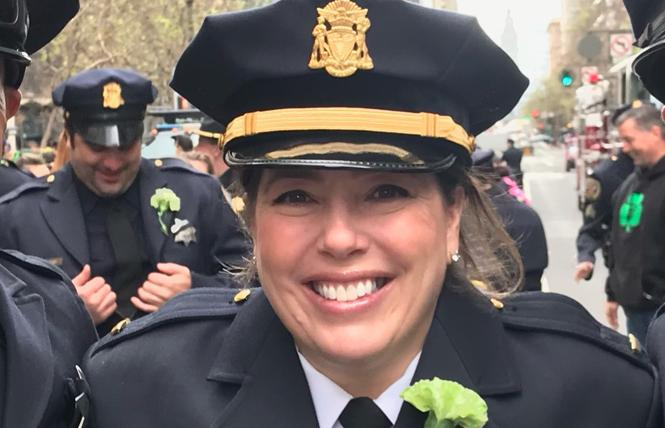 Mission Station's new captain is spending at least some of her first weeks on the job reconnecting with the communities she serves in central San Francisco.

"It's been absolutely fantastic," Captain Rachel Moran told the Bay Area Reporter. "It's great reconnecting with staff at the station and going out to talk with the community from a captain's perspective. It's good for your soul — great, but busy, let me tell you."

As the B.A.R. reported last month, Moran, who'd been an officer at Mission Station for about a decade until being transferred to the special victims unit for a year and a half, returned to become the first woman to lead the station February 20. In addition to the Mission district, the station serves part of the Castro and Noe Valley.

Moran had said she was scheduled to meet with Masood Samereie, a straight ally who is president of the Castro Merchants, March 9.

"If I have time prior to that we can do it sooner," she said.

Samereie told the B.A.R. he indeed had the chance to meet with Moran on March 2.

"She is excited and ready to tackle the issues on hand here in the district in collaboration with the neighborhood business and residents organizations," Samereie stated. "She knows and we all know no one person can resolve all of our issues, but she is committed to do all she can to help us resolve challenges we face on daily bases in the Castro district, including drug dealing and open drug use on our streets, helping unhoused by offering services, break-ins, burglary and theft."

Behind Moran, who appeared via Zoom, were some greenery.

"I brought plants, I brought pictures and I'm here — God willing — to address your problems." she added. "I'm looking forward to meeting everyone."

Dave Karraker, a gay man who is a spokesperson for and board member of the Castro Merchants, confirmed that Moran will be attending the association's monthly membership meeting again in April and will give a presentation. He stated he also had the chance to meet with her.

"She will be an exceptional resource in addressing the issues currently facing the Castro," Karraker stated in an email. "Of particular note during our meetings with Captain Moran is her pledge to focus on tackling the very obvious problem of the district's unhoused, particularly those who are actively using drugs and those with mental health challenges. These individuals are creating an environment where small business employees, residents, and visitors to the neighborhood don't feel safe, and based on our research are also suspected to be the individuals responsible for a great deal of crime in the area — particularly malicious mischief/vandalism."

San Francisco Police Department communications director Matt Dorsey confirmed that Moran will be going on an official merchant walk. As the B.A.R. previously reported, neighborhood leaders and city officials such as Samereie; Tom Temprano, a gay aide to gay District 8 Supervisor Rafael Mandelman; Matt Donahue, a bisexual assistant district attorney who is the DA office's liaison to the Castro; and David Burke, a straight ally who is District 8 community liaison, have been going on these walks to identify issues to address in the neighborhood. 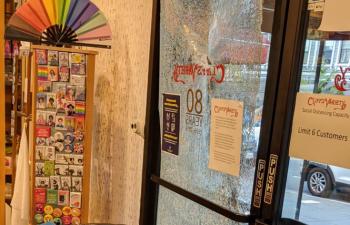 Cliff's Variety is one store in the Castro that has had its windows smashed. Photo: Courtesy Terry Asten Bennett

Terry Asten Bennett, the general manager and one of the owners of Cliff's Variety in the Castro, said March 1 that she planned to meet with Moran March 3.

"I have found when I make myself known to the new captains they are more responsive when I have a need," Asten Bennett, a straight ally, stated. "I think it is important to humanize yourself so that it reminds people that you are not just a statistic but a living human being."

After that meeting, Asten Bennett stated, "It was great. She is very open and personable. She was honest about her goals and limitations for the department."

Safety in the Castro at a crossroads
As Karraker mentioned, one major issue that the Castro neighborhood faces is the number of unhoused people there, some of whom have mental health challenges.

"The businesses and the residents of the Castro understand quite clearly that the current environment simply cannot continue if we want to preserve one of the most iconic neighborhoods in the city and a global beacon for the LGBTQ community," Karraker stated.

Richard Wigen, a gay man who is a 35-year resident of the Castro and retired social worker, told the B.A.R. that street conditions in the area this past year are the worst he's seen. He said that while the Healthy Streets Operations Center sometimes comes to clear homeless encampments, they often reappear in the same spot shortly thereafter — something he said he thought police had the authority to stop after HSOC teams had done their work.

"It seems like there's a problem with that," Wigen said.

Dorsey stated that HSOC can only take a "services-led approach" because "there are no re-encampment laws in San Francisco."

The homelessness crisis comes alongside a wave of crime, such as burglaries, which have plagued the area since the start of COVID-19 pandemic-associated lockdowns and restrictions. The merchants have even gone so far as to create a spreadsheet of 94 windows that have been broken since the beginning of last year.

Moran said that station leaders have identified and are implementing three specific law enforcement strategies for the area they cover. The first is the use of investigative teams and "innovative technology to apprehend suspects;" the second is surveillance of the area in plainclothes, which has been going on primarily from 2 to 6 a.m. but may soon expand to other hours; and the third is working with neighborhood groups to prevent crime from occurring in the first place.

Moran hopes to encourage neighborhoods to organize, block by block, to protect themselves.

"Over the past one to two years we have officers who've been able to get neighborhood blocks together, all over the Mission, to the Castro to Noe Valley," Moran said. "When neighborhoods and the police collaborate together, it's very successful. Organizing blocks, cameras, and lighting have been significant; it seems simple but things like trimming trees [to see people] have gotten success. Take a good look, call your neighbor, own your block. We want to give power to the people in homes."

Police department also challenged
Moran also noted that two officers who'd been injured last month are back on the job.

On February 21, around 5 a.m., two officers at 21st and Castro streets who were conducting a burglary surveillance operation detained Sergio Lugo, a 41-year-old man.

"I spoke with one of the officers that day, one who I already knew from Mission Station," Moran said. "I spoke to the other who'd been stabbed, later. They're both back at work."

In a news release, the SFPD stated that Lugo had originally been cooperative.

"During the struggle, Lugo produced an edged weapon and lunged toward one of the officers," the news release states. "Lugo stabbed the officer in his left hand and left knee. A second officer injured his hand during the struggle. Following the assault, officers were able to place Lugo into handcuffs and restrain him. The officers and Lugo were transported to a local hospital where they were all treated for non-life-threatening injuries."

Police Chief William Scott (whose office did not make him available to comment for this story) stated that the weapon was an X-Acto knife, "which has an extremely sharp razor."

"Violent attacks on our police officers are unacceptable," Scott stated in the release. "X-Acto knives are unassuming, but when used as weapons are easily concealed and exceedingly dangerous. We're grateful that our officers' injuries were not more severe than they were, and our thoughts and prayers go out to them and their families for a speedy recovery from their injuries."

Lugo was arraigned February 19 and pleaded not guilty, according to the San Francisco Public Defender's office.

Lugo's attorney, Deputy Public Defender Alexandra Pray, told the B.A.R. March 2 that "from our perspective, Mr. Lugo was acting in self-defense and it's not even clear he was using the knife in self-defense; it was a chaotic scene where the officers were on top of him and they went too far in trying to physically subdue him."

"I think the [SFPD] news release is true, but it leaves out important details," Pray said. "When Mr. Lugo was detained, [police] thought he might commit a burglary, but he had not committed any crime as far as they knew or suspected. I don't believe the officer was stabbed in the knee. A second officer injured his hand due to punching Mr. Lugo 15-20 times while another officer restrained him; so, it was pretty one sided. The alleged stabbing was in response to a physical altercation, but prior to [Lugo] being punched in the face."

When asked for its comment regarding Pray's remarks, SFPD spokesman Sergeant Michael Andraychak stated, "We will not be making any further comments on the investigation."

Although she touted her walks around the precinct, Moran said that whether foot or car beat patrols are better in general depends upon the context.

"In theory, I love foot beats, but we're an understaffed department right now, and a foot beat officer can't respond one mile away to a high-priority call," Moran said. "That's what we're faced with. The city and the community need both, but the question has to be 'what are our resources?'"

A 2020 report from the Matrix Consulting Group on SFPD staffing found that the city was short 265 police officers.

Moran said that the understaffing has consequences.

"Our department does a great job on Priority A emergencies," she said. "On a lower priority C call, our response times are not what San Franciscans should expect."

Dorsey said that Mayor London Breed is insistent that while she redirects some money away from the police department and asks for budget cuts across-the-board, she will not be firing police officers.

"There's a vocal group of active community members arguing to not just defund, but to abolish policing," Dorsey said. "The mayor's got our back."

"Every department was required to submit proposed budgets to meet target reductions, and the mayor will take all of those proposals into consideration as the budget is crafted over the next few months," Cretan stated to the B.A.R. "These departmental budgets, like the one the Police Department submitted, are only proposals, and so no cuts or final decisions have been made yet. The mayor has made clear that she is not supportive of laying off police officers, and she will not be doing so as part of her budget when it's introduced."

But the understaffing problem may soon get much worse anyway, Dorsey said.

"There is a large cohort from the 1990s because [then-President] Bill Clinton made a commitment to put 100,000 police on America's streets," Dorsey said. "The government funded that, and now that Clinton cohort is coming on retirement age."

Moran became a member of the SFPD at that same time, she said. When asked why she'd wanted to be in law enforcement at the beginning, she said, "Oh man, honestly the answer I'd give you in 1994 and today is still the same."