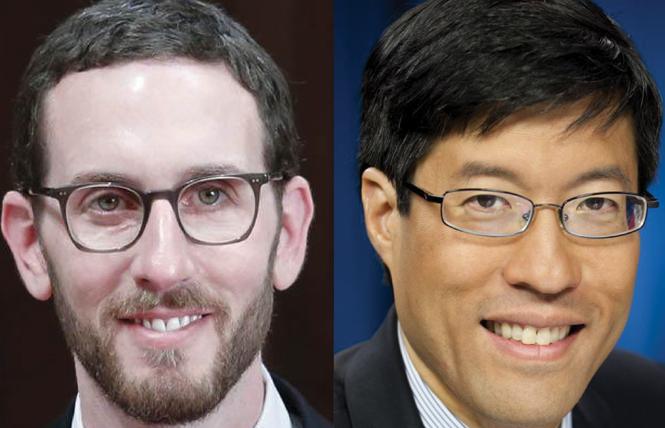 A bill to strengthen the sexually transmitted disease public health infrastructure of California is better than a similar effort that had initially been introduced last year, a principal co-author of the legislation told the Bay Area Reporter.

"This is broader," Wiener told the B.A.R. "Last year I authored the bill to allow HIV counselors to administer rapid syphilis tests. They could administer HIV and regular syphilis tests, but not rapid, which makes no sense to me. Because of COVID-19, I dropped it with the intent of reintroducing it this year, when I found out that Senator Pan was interested in a broader [sexually transmitted infections] testing bill, so this legislation will significantly expand access to STI testing, which is so important."

According to a news release from Wiener's office, the legislation will "permit the Family [Planning Access Care Treatment] program to offer covered benefits to income-eligible patients, even if contraception is not discussed during the patient encounter; update California's [Expedited Partner Therapy] statute to include provider liability protections used in other states; permit HIV counselors to administer rapid STD tests; update state law to require congenital syphilis testing during the third trimester of pregnancy; [and] require coverage of home STD tests by public and private insurers."

Liability protections may lead to the increase of the practice of giving people diagnosed with an STI two doses of treatment — one for themselves and one for their sexual partner.

Pan told the B.A.R. that the Legislature can focus on two public health crises at the same time.

"We are focusing on the COVID epidemic, but that doesn't mean problems pre-COVID are gone," Pan said. "We still need to address it. People are still getting ill from STDs. Even though we are trying to socially distance, it doesn't mean STDs have gone away. As we get people vaccinated and other types of activities resume, we'll have to deal with the STD problem."

As the B.A.R. previously reported public health experts are sounding an alarm that STD numbers — which had been up in recent years — may rise even more due to a variety of factors, such as a lack of current testing and treatment due to COVID-19, the end of physical distancing, and the spread of antibiotic resistant variants.

"Our health care systems are stressed," Pan, himself a practicing pediatrician, said. "Our public health systems — which do the lionshare of work on STDs — are stressed. People are exhausted. We're going to have a potential collision of increased intimate contact, an STD epidemic building up for many years, and a stressed health system, with serious consequences."

APLA Health is one of the sponsors of the bill.

"California is facing an out-of-control STD crisis that was raging even before the COVID pandemic," APLA Health CEO Craig Thompson stated in a news release. "Now, following nearly a year of stay-at-home orders, we have mounting evidence that the state's STD epidemic has grown even worse. STDs are still on the rise, testing and treatment services are in short supply, and more serious cases of STDs are beginning to emerge. SB 306 is a comprehensive proposal that will strengthen California's public health infrastructure and expand access to STD testing and treatment at a time when it is most desperately needed."

The San Francisco AIDS Foundation and the Los Angeles LGBT Center are also listed as sponsors.

"Allowing HIV counselors to perform rapid STD tests is a commonsense, practical solution to getting more people tested and treated for STDs," stated Joe Hollendoner, the CEO of the AIDS Foundation who has been tapped to take over at the LA center. "This legislation will help California address its STD epidemic by ensuring that people of color, LGBTQ+ individuals, young people, women, and other communities experiencing high rates of infections can access HIV, HCV, and STD testing from a singular, properly-trained test counselor in a safe and trusted setting."

"SB 306 will ensure that LGBT people have increased access to STD testing and treatment and is a crucial step forward in ensuring that California can and will end the STD epidemic," Jean stated. "We commend Dr. Pan for introducing SB 306, his continued leadership on the issue, and for being a champion for our community. We are proud to stand with him."

Representatives of Equality California said that they were supportive of the efforts as well, though they left sponsorship to allied organizations.

The bill was referred to four committees, including the committee on health, and may be acted upon on or after March 7.

But the release of that monthly report, which would be the last for 2020, has been delayed due to the COVID emergency.

"Our STD epidemiologists are all occupied and working on COVID," Veronica Vien, a spokesperson for the department of public health, stated to the B.A.R. March 1. "We are working to get the [numbers] out as quickly as possible, hopefully within the next one to two weeks."

When the numbers do come out, they could give unparalleled insights into how the COVID-19 pandemic has affected the sexual ecology and health infrastructure of the city.